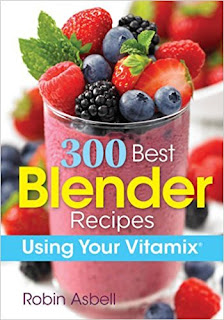 If I was forced to leave my house due to some disaster, I'd obviously save my pets first. And then my photos. But if I still have time to go back for one thing, I'm taking the Vitamix. It is, hands-down, my most used, most cherished kitchen appliance, and quite frankly, I'm not sure how I survived without one for so many years.

I use it most often for making my morning smoothies. Nothing shreds kale and blueberry skins like a Vitamix. It's also my go-to for cashew cheeses, homemade nut butters, salad dressings, sauces, soups, dips, you name it. But real talk, I could really be doing more with it. That's a lesson I learned from 300 Best Blender Recipes Using Your Vitamix, a new cookbook by Robin Asbell.

This is not a totally vegan cookbook, but it has LOTS of vegan recipes (I'd guess maybe half to three-fourths of the book is vegan). Some dishes call for meat and milk, eggs, honey, and, cheese. But most of the vegan recipes are clearly marked (and some are just sneaky vegan, which is awesome for exposing non-vegans to vegan food without making a big deal about it).

What a diverse range of things, right? I was especially impressed that there's a whole chapter for energy balls. And even baby food (did you know that baby food is great fuel for long-distance runs?). Plus, homemade beauty products! Although I should have let this inspire me to branch out, I pretty much stuck with the smoothies and soups for this review. First, I tried this Green Smoothie Bowl with Berries, Bananas, Nuts, & Flax. 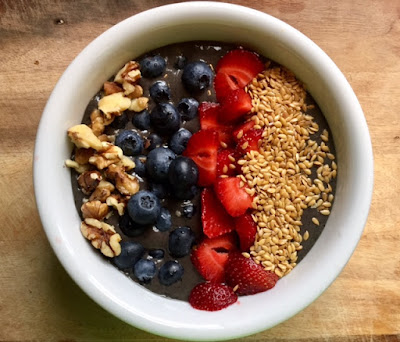 The recipe calls for kefir, so I used a vegan version from Cashewgurt, plus frozen banana, frozen blueberries, and spinach for the base. I added protein powder too. It's topped with raw walnuts, golden flax seeds, and fresh berries. Such a light and lovely breakfast on a hot summer day.

I drink so many smoothies, so I'm always looking for fresh ideas. And this book is filled with them. The Almond Chai Smoothie was made with cold-brewed chai (I used Blue Lotus), almond milk, frozen mango, and chai spices. I also added some Vanilla Chai Vega One powder, which is why this smoothie looks green even though it contains no fresh greens. 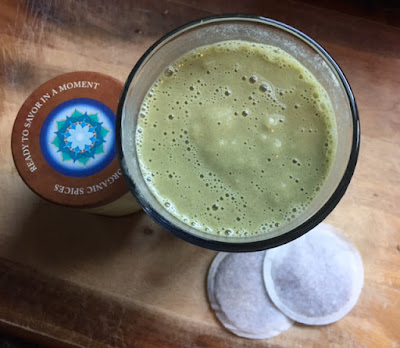 I picked up some gorgeous summer tomatoes and zucchini at the farmer's market last weekend, so I consulted the soups chapter and found this Garden Tomato, Zucchini, & Basil Soup. 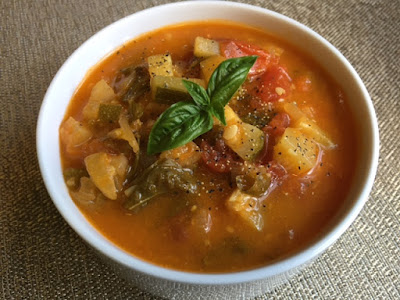 THIS WAS SO GOOD. You blend the tomatoes in the Vitamix, saute the zucchini and garlic in a saucepan, and then pour the fresh tomato broth over it. I added fresh basil from my front porch herb garden. This is what summer tastes like. I ate the last of it yesterday, and I'm bummed it's gone.

There are so many more things I want to try so I can branch out of my smoothie and soup Vitamix rut and get creative. My list includes Pepita Butter with Cumin & Chiles (savory pumpkin seed butter!), Cashew Chevre, Vegan Alfredo Sauce (with cashew cream), homemade Curry Powder (made with ground seeds and spices!), Aquafaba Mayo, Vegan Nacho Queso (with cashews), Tempeh Walnut Burgers, Apple Kale Muffins (you make your own flour in the Vitamix using wheat berries!), Vegan Chocolate Cashew Pie, and most importantly, the Lemon Thyme Vodka Slushy (because vodka!).
Posted by Bianca at 9:00 PM

The envy is real here! I've always wanted a Vitamix but haven't been able to make the investment yet. I know it is a really good investment to make but I just haven't had the opportunity yet. That said, the cookbook sounds amazing and I love how much of it is vegan!

I bought a Vitamix about six months ago, wish I had bought it years ago! I'm the same, just use it for cheese dip and smoothies but after seeing your cookbook review, I'm going to invest in the book. I need more ideas!

That looks like a great book. I don't have a Vitamix yet, but my Ninja blender is pretty awesome! And a girl can dream!