Yesterday, the Fourth of July, was a lovely day in Memphis until about 5 p.m., and that's when the rain began — right around the time we were planning to grill out at my friend Andy's house. The forecast showed scattered storms, so I thought maybe we could sneak in some grill time in between showers. Andy wasn't so sure grilling would work out, but I convinced him to fire it up when it was still just sprinkling.

While we waited for the coals to get hot, I whipped up some Vegan Onion Dip using Tofutti sour cream and Simply Nature Onion Dip Mix. Y'all, I could live off onion dip! But I try not to make it often because I have very little self-control when potato chips and onion dip are around. I enjoyed this with some IKEA potato chips (they're so crunchy!) and a Golden Road Ride On IPA. 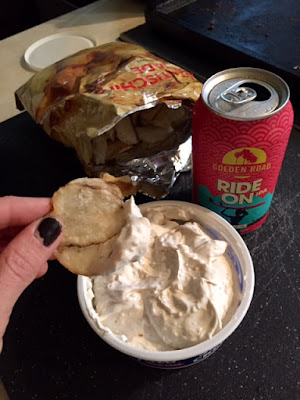 When the grill was ready, I tossed on some corn on the cob. And that's when the real rain started. Andy was regretting letting me convince him to grill, but we were too far in by that point to turn around. He got out the umbrella and put on his burgers, and then we added my vegan brats. You'll have to excuse the meat in Andy's hand here, but I needed to post proof of Andy grilling in the rain. 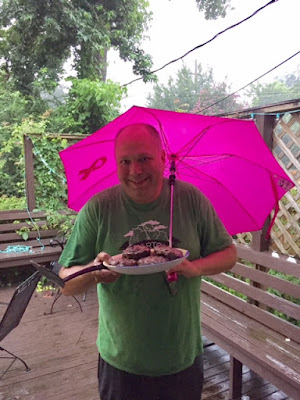 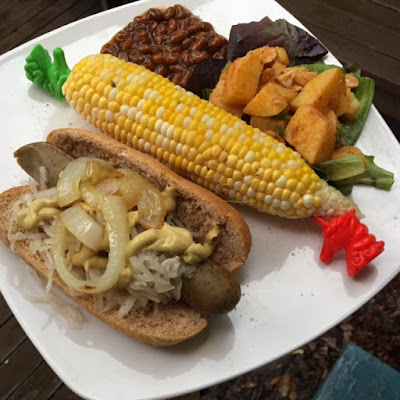 That Smoky Potato Salad recipe came from The No Meat Athlete Cookbook, which as I mentioned in Monday's post is my new favorite cookbook! This mayo-less salad is made with Yukon gold potatoes, toasted almonds, and a touch of Liquid Smoke. It tastes like bacon! They recommend serving it over baby greens, so I used baby romaine. 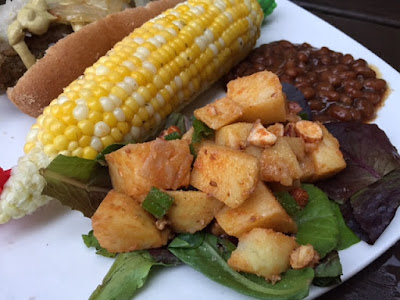 Andy's dog Bella was not a happy camper. She's scared of fireworks, so she'd been up all night since people started lighting them off on Monday. And then when the rain began, so did the thunder and lightning. She didn't like that either. Poor pup. 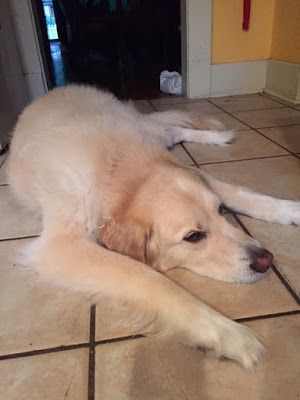 After dinner, we lit some sparklers in Andy's front yard. By then, the rain had let up a bit. We asked his friend Blake to take a selfie, but they all came out blurry. Clearly, Blake lacks selfie skills. 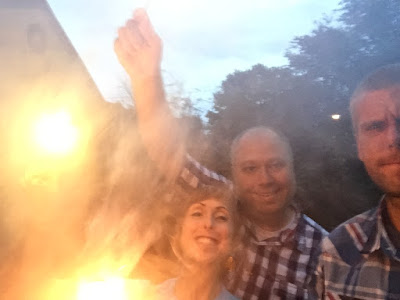 Then we headed downtown for the big fireworks show over the Mississippi River. I watch this show every year (usually with Paul, but he was in Nashville this weekend for work), and I wasn't going to get a little rain stop me this year. It was just sprinkling when we left to head downtown, but just as we were parking, the rain picked up again. The fireworks went on as planned though. Rather than carry our chairs down by the river and get all wet, we watched the fireworks from the covered porch of an office building. Some of the fireworks were blocked behind the big houses on the bluff, but at least we stayed dry! Check out my awesome rainbow prism glasses. These make fireworks look even more awesome! 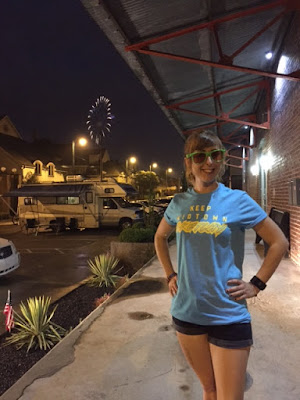 Hope you had a happy (and dry) Fourth of July!
Posted by Bianca at 8:30 PM

I love onion dip so much too! Poor Bella! I always feel bad for animals around the 4th. I live next to an elementary school so lots of people have been letting off fireworks in the parking lot, and my cats have been terrified. People are the worst.
Your final plate looks delicious!!

What a fun 4th of July celebration!! Looks like you had a really festive and delicious meal and I'm glad that you were not rained out! How fun to be able to see the fireworks too, I bet they were beautiful over the river.

I agree with vegan peace, I always feel bad for animals when it's time for fireworks. My fur nephew Tyler is terrified of them and it always takes him hours to calm down after. Same thing with thunder so it looks like he and Bella are in the same camp.

That's awesome you didn't let a little rain stop your celebration!
That potato salad sounds really unique and tasty- i'm not a big fan of the classic with mayo. And bad selfies are sometimes the best! The photo looks fun and joyful :))
Ttrockwood