The No Meat Athlete Cookbook 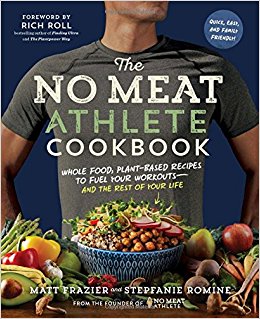 The No Meat Athlete podcast is my current obsession. I've been listening for a little over a year, and I CANNOT get enough. It's hosted by vegan ultra-marathoners Matt Frazier and Doug Hay, and they discuss everything from healthy habits to extreme diets (Matt tried the fruitarian thing once) to running form. Plus, they have special guests from the vegan fitness and food communities, like bodybuilder Robert Cheeke, Yum Universe blogger Heather Cosby, and Vega founder Brenden Brazier. I listen to all the new episodes as they're released, and in the in-between time, I catch up on the older episodes.

I have Matt's first book, No Meat Athlete, which is more of a guide to becoming a healthy vegan runner than a cookbook. It does have a small recipe section, but the book is more text than recipes. But now Matt and co-author Stephanie Romine have a new book out, and it's ALL COOKBOOK. It's appropriately named The No Meat Athlete Cookbook, and even though it's only been out for about a month, it's already been named one of the seven best health and wellness books of 2017 by Sports Illustrated!!! A vegan cookbook, y'all! This is a big damn deal.

I can totally see how the book was bestowed that honor. I pre-ordered the book a few months ago, and my copy arrived just a few weeks back. I've already cooked so many things from it, and everything has been amazing. Although I'm a fan of my vegan junk food and processed snacks, I do aim to eat a whole foods-based diet most of the time, and that's exactly what this book offers. Plus, there's a whole section on foods for fuel and recovery!

Let's start with breakfast! The morning meals chapter is filled with hearty, mostly savory breakfast ideas, which is awesome because I much prefer savory over sweet in the mornings. I'd been craving burritos for awhile, so I just had to try the Breakfast Tofu Burritos. 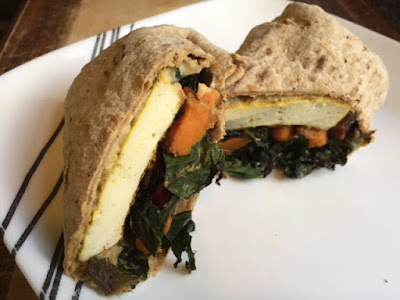 These are made with a special Breakfast Tofu recipe from the book, as well as sauteed veggies (I used dino kale, mushrooms, and bell peppers), roasted sweet potatoes, and hummus. Oh, and lots of nooch! I loved the combo of tofu and hummus in my burrito.

The Breakfast Tofu recipe made six pieces, and I only had four burrito wraps, so I had the rest one morning with toast. This is an eggy-style baked tofu coated in nooch, cumin, curry, garlic, and turmeric. Perfect with sprouted grain toast. 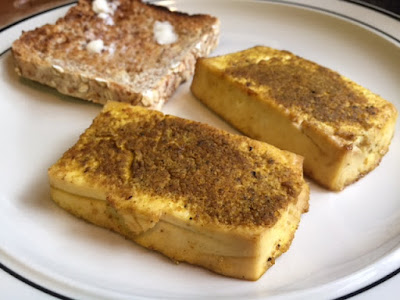 Next up is the Dinners & Hearty Meals section, from which I've cooked several things already. My very favorite dish from that chapter (and actually the whole book so far) is the Sheet Pan Meal with Miso Gravy. 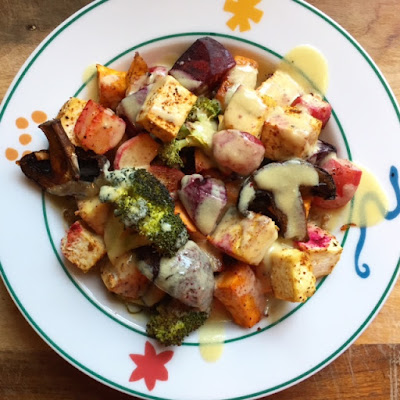 Many of Matt and Stephanie's recipes are "blueprints" that give a basic outline for how to cook a dish but allow lots of flexibility. For this meal, you pick either tofu or tempeh and your choice of veggies (I went with sweet potato, broccoli, radish, and beets) and season with one of a few recommended spice blends. I chose garam masala. Then, you just mix it all together and roast on a sheet pan, simple as that. They recommend serving this with another recipe from the book — Miso Gravy. So I did! Miso adds an element of umami to a traditional gravy recipe, and it really steps up this simple dish. I served mine over quinoa.

Another blueprint-style meal was this Lifesaving Bowl. You start with a cooked whole grain and add raw veggies, avocado or hummus, kraut or kimchi, nooch, lime juice or vinegar, and sesame or hemp seeds. I tried it a couple different ways — first with quinoa, zoodles, carrots, and bell peppers, kraut, hummus, ACV, nooch, and hemp seeds. 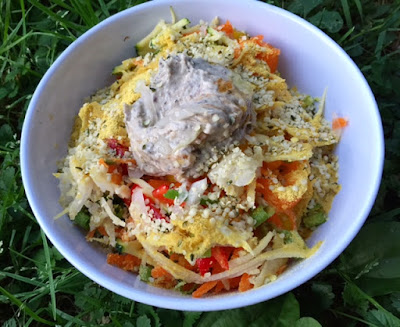 And then with quinoa, zoodles, bell pepper, cherry tomato, kraut, avocado, lime juice, nooch, and hemp seed. Both versions were fantastic. I loved how the crisp veggies stood up to the soft quinoa, and the acidity of the vinegar or lime juice flavored the veggies without needing to add too much salt. I also learned that kraut, nooch, and hemp seed make a perfect flavor combo. 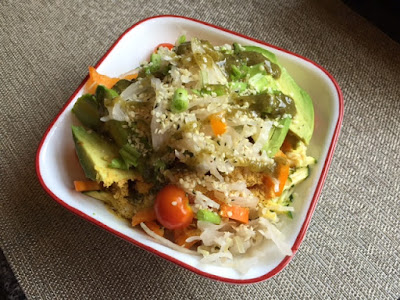 Matt and Doug both live in Asheville, North Carolina. I had a friend who used to live there years ago, and when I went over to visit with her, we ate at Rosetta's Kitchen, a vegetarian comfort food cafe. I ordered the peanut butter tofu. I remember it being SO GOOD. Well, this new cookbook has a recipe for a Rosetta's-inspired tempeh version. I made that Peanut Butter Tempeh tonight and served it with the Korean Miso Tahini BBQ Sauce from the book (on the recommendation from the recipe intro). 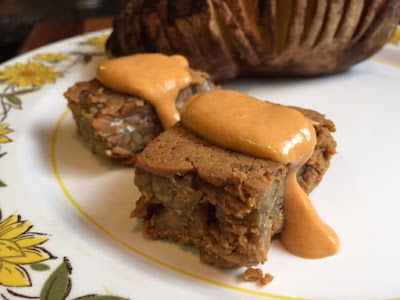 This was so perfect! Took me way back to that Rosetta's visit in 2009! The tempeh is coated in a thick noochy peanut butter sauce and then baked until the sauce forms a crust. The Tahini Miso BBQ Sauce really stepped it up. This sauce is probably the best thing I've eaten in awhile. It's made with miso, tahini, brown sugar, garlic, ginger, and chili paste. All of my favorite flavors mixed together! I made a ton, and I'll be eating on everything until it's gone. 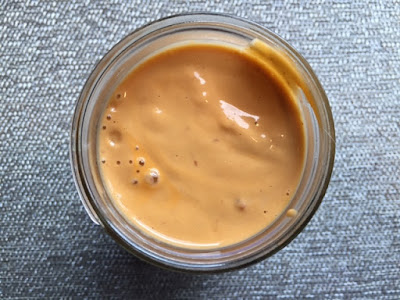 I haven't made much from the Get Your Greens chapter yet, but I did make the You Won't Believe It's Cashew Ranch Dressing, a creamy, dreamy cashew ranch with just the right level of dill, garlic, and tang (from ACV and lemon juice). I enjoyed it on many salads and had some as a dip for baby carrots and cucumbers. 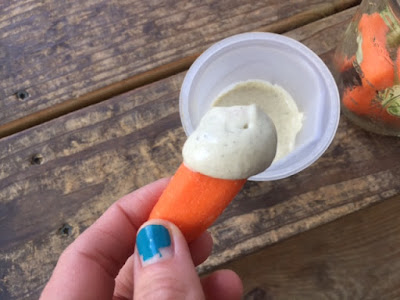 The Fuel & Recovery: Real Food for Before, During, & After Workouts section is my very fave of course! Y'all know I'm all about fitness nutrition. The very first thing I made from the cookbook was Switchel from this chapter. I didn't take any pics because it's just water, ACV, maple syrup, ginger, and salt. It looks like brown water, but it serves as a very effective way to take in electrolytes after a tough workout. I've been using this switchel recipe in place of my usual electrolyte powder after runs.

Several of the smoothie recipes call for protein powder, which is totally my jam. But I was curious to try the Bulked-Up Smoothie, a protein powder-less smoothie that gets it's protein from white beans, oats, and almond butter. It also contains greens, berries, banana, and cocoa powder. The first day I made this, I used kale instead of the baby greens the recipe called for. Bad choice! Because there was no flavored protein powder to mask the taste, all I could taste was the bitter kale. But the next time, I opted for a flavorless greens powder instead, and it was so good. Tasted like a PB chocolate smoothie with berries. 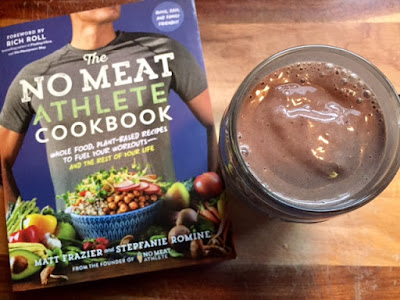 One of the most exciting sections of the book for me is the blueprint for creating your own flavored protein powders. They tell you how to start with an unflavored plant protein powder and create flavors like green tea, PB&J, and mint chocolate chip using only natural ingredients, like dried mint, powdered PB, freeze-dried strawberries, and the like. I have a flavored protein powder stash in my pantry now, but when that runs out, I will definitely give these a try and hopefully save myself some money!

There's also a dessert section that's loaded with good-for-your sweets, like Banana Cream Chia Pudding Parfaits, Two-Minute Truffles (made with dates, pecans, and chocolate chips), and a single-serving Chocolate Lava Mug Cake (made with beans!). I haven't tried anything from that section yet, but I'm sure I'll get a sweet craving soon, and that mug cake will hit the spot.

Y'all, I love this book! And you'll be seeing me post many more things from it! If you buy just one book in 2017, make it this one. It's a gorgeous book loaded with full-color pics, and the food is phenomenal.
Posted by Bianca at 9:52 PM

I am so with you on the savory breakfasts. I just crave hearty and savory in the morning, especially after I've worked out.
Every meal you've shown looks out of this world! I need that tempeh in my life. And I definitely need the Korean miso tahini BBQ sauce. That sounds drinkable!
I've heard of adding beans to smoothies but haven't tried it myself.
Sounds like a really great book. I need to check out the podcast!

I see I am not the only one with the brilliant idea of using freeze dried strawberries in a homemade protein powder XD I would love to see what else he uses for the mixes, I think my husband is getting sick of his chocolate oat smoothie mix.

Wow, that is seriously amazing that they were chosen by Sports Illustrated! Vegans have been getting some pretty great recognition lately and I'm loving it! The meals all look so good. I'm especially loving that breakfast burrito. I don't know why I never make them, they are always some of my favorite breakfasts! The roasted sheet pan meal looks really great as well!

Love the "sheet pan meal"! I actually do that for lunches for the week, but just with veggies and without the sauce... Clearly I need to step up my game!!

I have to buy this!!
His recipe for DIY granola bars formula from what you have on hand and veggie burger formula from gis website are amazing and taught me to cook without a recipe.
That breakfast tofu and peanut sauce sound so freaking good
Ttrockwood