My food game has been pretty strong lately. Lots of delicious restaurant meals + plenty of fresh, healthy meals prepared at home with the bounty of summer produce available at the Memphis Farmer's Market (downtown) and Curb Market (in Crosstown). I've also been WAY into sandwiches lately.

Last week, I made the Roasted Vegetable Po'Boys from my own cookbook, Cookin' Crunk. I've been cooking from my book more lately now that fresh produce is everywhere. So many of my recipes call for summer produce, and this one has long been a fave. Roasted zucchini, bell pepper, portabella, and red onions on toasted po'boy bread with vegan cheddar. On the side, I cooked from Cauliflower-White Bean-Onion Veggie Rings in the air fryer. These awesome onion rings have extra veggies added for bonus nutrition! I found them in the freezer section at Kroger. 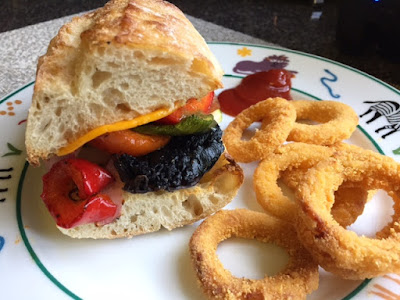 Speaking of po'boys, Paul and I had dinner at the Bayou Bar & Grill recently. I always get the Portabella Po'Boy minus the cheese. This has the best sauteed mushrooms and peppers. The juices soak into that soft bread, and it's just so good. It comes with fries, but I subbed a salad this time because I needed to lay off the fried stuff. 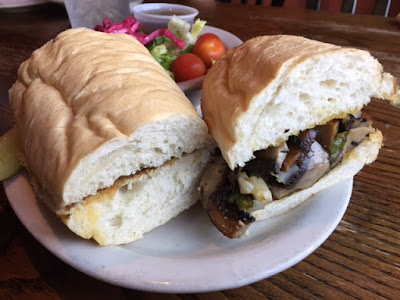 But of course I had fries on National French Fry Day a couple weeks back. Had dinner at Imagine Vegan Cafe with some friends and got the BLTA with Sweet Potato Fries. 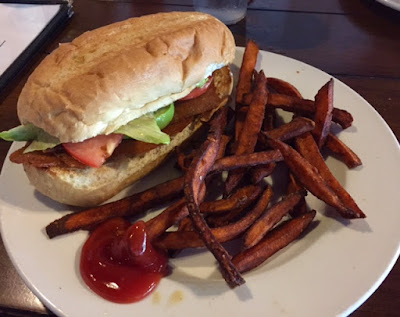 I ate at Imagine again last week with Isabella, a new German vegan friend who was traveling through Memphis on a North American/South American adventure. She wanted a taste of the South, so we went to Imagine where she could get vegan chicken and waffles. I had the Sheila Dog — a fried veggie dog topped with coleslaw, vegan cheese, kraut, and pickled jalapenos. 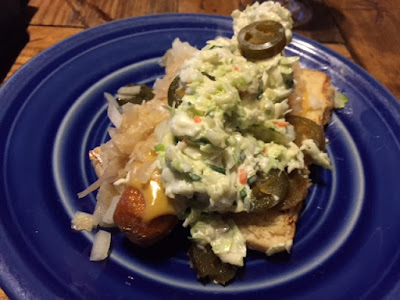 Plus, we all shared some Spinach & Artichoke Dip, courtesy of my friend Vaughan, who very nicely paid for the entire meal! There was Biscoff cheesecake eaten as well, but we failed to take a picture. 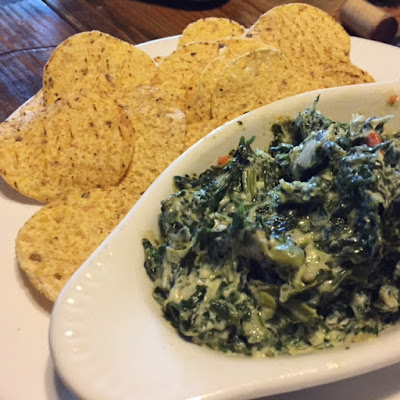 Found some Beyond Meat chicken strips on sale at Target a few weeks back, so I used a recipe from the back of the bag to whip up this simple Vegan Chicken Salad — Beyond Meat strips + vegan mayo + celery + grapes. Perfection in a wrap. 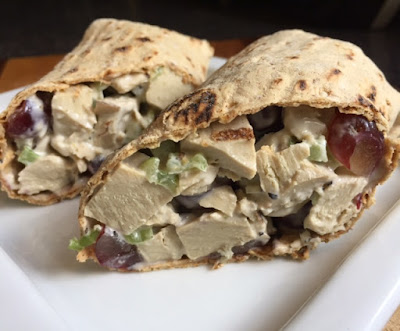 Susan and I had dinner at City Silo one night a couple weeks ago. I got the Foxy BBQ Sandwich (a spaghetti squash BBQ sandwich) with added buffalo tempeh. Vegan slaw on top, plus a side salad. 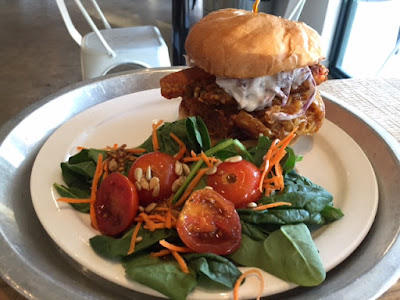 Hey, this isn't a sandwich! Fridays at Crosstown Concourse are now Food Truck Fridays, and the Paul's Cariflavor truck was here. They have Caribbean food, and several options are vegan. I got the Vegan Roti, which was stuffed with curried chickpeas and potatoes. OMG SO GOOD. 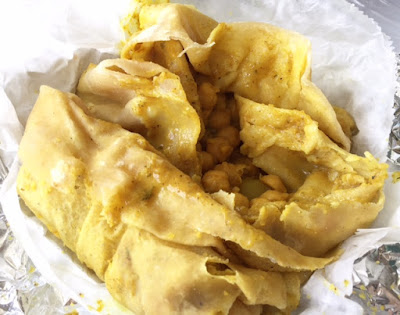 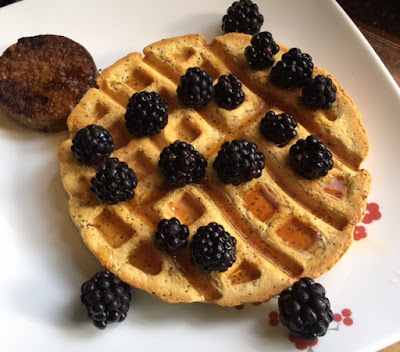 I've also been eating plenty of Avocado Toast lately. Got this idea to add baked tofu from the No Meat Athlete Cookbook. I added a thin slice of Wildwood Savory Baked Tofu to each avo-toast, plus tomatoes, homemade pickled onions, hot sauce, and Trader Joe's Everything But the Bagel Seasoning. 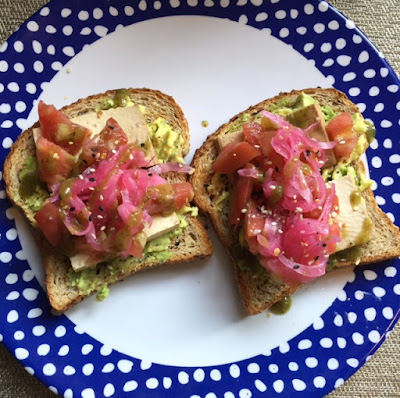 Your food game is always strong! :) Everything looks delicious as always but that spinach artichoke dip has me drooling, along with the sweet potato fries. The sandwiches look amazing too! Definitely a bunch of great meals!

Agreed - your food game is always strong! We've been feeling avocado toast lately too. Our's are plain though. Clearly, we need to be adding more stuff for max deliciousness. Your's looks amazing!

I've never tried spinach artichoke dip but I'm almost certain that I'd love it. I would also love a chicken salad sandwich wrap right now, your version looks just like the grape, celery, & poppyseed version that I always grab from Whole Foods when I'm travelling in the US.