September is NO BACON Month! 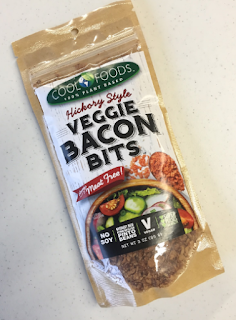 Happy No Bacon Month! The makers of the most awesome vegan bacon bits on the planet — Cool Foods Vegi Bacon Bits & Dips — have declared September a bacon-free month (or, at least, meat-bacon-free) since September 3rd was International Bacon Day. I missed posting on the actual day because I was out of town.

But it's not too late to mention their campaign to protect pigs by reducing bacon and pork consumption in the month of September (and honestly, if you can make it a month, you might as well give it up for life, right?). Cool Foods has put together a really awesome website filled with fun pig facts and a place to pledge to go bacon-free in September. They're also asking people to tweet about why they're skipping bacon using the hashtag #NoBaconDay.

I'm fresh out of Cool Foods bacon bits. I reviewed them awhile back, and then I immediately ordered two more bags because they're seriously the best bacon bits I've ever had. They're made out of pinto bean pulses, and they're super smoky and crunchy! I'm about to go order more right now. But in the meantime, I celebrated No Bacon Month today with a Vegan BLT made with Sweet Earth Benevolent Bacon, Just Mayo Light, B Free white gluten-free bread, tomato, and lettuce. 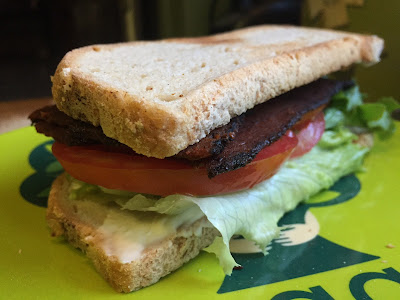 If you need a reason to give up pig bacon, here's a big one: Pigs rank #4 in non-human animal intelligence, just after chimps, dolphins, and elephants. In our culture, we don't eat chimps, dolphins, or elephants, so why are we eating pigs? Think about that. The cognition level in pigs is the same as a three-year-old child, and you certainly wouldn't eat a child (or a human of any age!), so again, why pigs? It just makes no sense. And it's cruel and awful and bad for your health.

Even though I'm out of Cool Foods Vegi Bacon Bits & Dips, I'm posting a picture of this salad I made awhile back with the bits because they're awesome. You can apparently also make an excellent dip using their bits, but I've not tried that yet. All the more reason for me to go order some more right now. 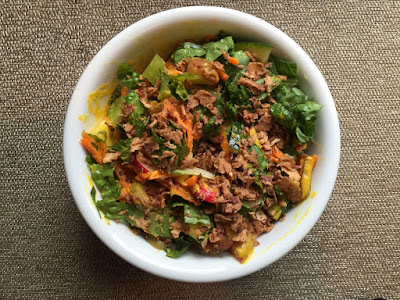 I love Sweet Earth's Benevolent bacon. I need to get some and make a BLT while the tomatoes are at their best! Those bacon bits sound interesting, made with pinto pulses? Pintos are my favorite bean!

I love making tempeh bacon, and also the Wayfare Pig Out bacon bits. What a great idea to have a No Bacon month!

Am I the only person in the U.S. who doesn't like bacon? I used to love it, then one day I just didn't, now it grosses me out.