Angela Liddon's Oh She Glows is one of those special recipe blogs where I literally want to make EVERYTHING she cooks. Her recipes are healthy, yet decadent; nourishing, yet flavorful; and simple, yet no one would ever know you didn't spend hours in the kitchen making them.

Angela released her first beautiful, full-color Oh She Glows cookbook a couple years ago. And now she's out with a new book — Oh She Glows Every Day — filled with whole foods, plant-based meals that are quick and satisfying. Again, this book is full-color, and it's filled with stunning, gorgeously styled food photos. I can't stop staring at the vegan ice cream-topped flourless brownie on page 194. CAN'T. STOP. STARING. 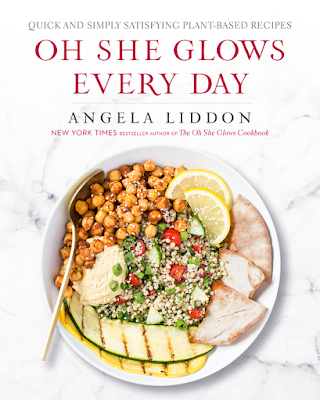 I picked a couple of recipes to try for this review, but narrowing it down to two was difficult. I'd actually been thinking a lot lately about stuffed avocados because I'd had some a couple years back at a food truck. I was thinking of just throwing some together when I saw Angela's recipe for Stuffed Avocado Salad. 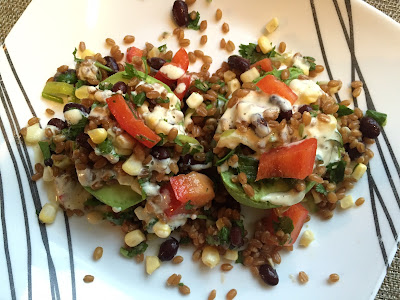 Two avocado halves are topped with a cold salad made from wheat berries (my favorite whole grain!!), black beans, corn, red bell pepper, cilantro, onion, and a lime-cumin dressing. And then that's all drizzled with a homemade lemon-tahini dressing. A salad with two dressings? Yes please! The wheat berries offer a nice chewy contrast to the soft avocado and beans, and the dressings are super-garlicky, which makes me happy.

Next up, I tried The Big Tabbouleh Bowl, which is actually the dish that's featured on the cover of this book. 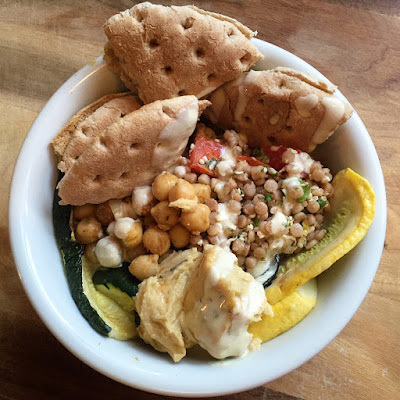 So much goodness packed into this bowl! There's a homemade tabbouleh that's supposed to be made with hemp hearts and sorghum (instead of the traditional bulgar). But I couldn't find sorghum grain, so I used whole wheat Israeli couscous. There are also falafel-spiced chickpeas, which add an amazing flavor to this cold salad bowl. Angela also includes a recipe for her homemade hummus, but I had two containers of Sabra in the fridge, so I figured I should use what I had. There's also grilled squash and zucchini, which I prepared on my indoor countertop grill. You're supposed to serve the bowl with pita, but I have a freezer full of Ozery Bakery OneBuns (leftover from a review), so I toasted and cut up one of those instead.

Plus, Angela's desserts look both healthy and delicious. There's a Peanut Butter Lover's Chocolate Tart — with a peanut/oat crust and coconut/peanut filling — that sounds like my dream dessert

I lover blog too. I just made an enchilada casserole and I used her enchilada sauce recipe and it was delicious! I want that tabbouleh bowl like now. Falafel spiced chickpeas sound amazing. Sometimes I want that flavor, but I don't want to make actual falafel.

I love her blog and first cookbook and I'm so excited for this one! The recipes you chose look amazing and obviously I want to see that brownie recipe now! :)

I have been enjoying this book so much! I made the stuffed avocado salad too, and I don't know why I don't make wheat berries more often. I love their chewiness. My favorite thing I have made, though, is the Caesar salad. If you haven't made it yet, get on it!

The lentil walnut taco meat from her blog has been one of my favorite recipes for years, i use less walnuts prob 2/3c instead of a full cup. The lettuce wraps are really messy so i just make a salad or use in actual tacos. It's so easy and keeps well in the fridge too
Ttrockwood