I'll be honest. I don't really miss cheese that much. I did for quite awhile after going vegan, but it's been 11 years now. And I honestly think the vegan cheeses — Miyoko's Creamery nut cheeses, Daiya shreds, Chao slices, Kite Hill cream cheese, etc. — are better than the dairy cheeses I remember. But there was one cheese that I just never found a good substitute for — buffalo mozzarella.

I didn't discover these fresh, soft balls of mozzarella until college, and I went vegan a few years later. So they weren't in my life for long, but they were up there on my list of fave cheeses. I tried making the recipe for fresh mozzarella (using cashews) in Miyoko's Artisan Vegan Cheese, but it was the one recipe from that book that I've tried that just didn't work out. I'm sure the error was mine. But after that, I gave up on finding a sub for buffalo mozzarella.

Until last week! That's when a review sample of Miyoko's Creamery Fresh Buffalo-Style Mozzarella arrived at my office. Unlike Miyoko's Creamery's wheels of aged cheeses, the mozzarella doesn't come in a box. It comes in a plastic tub. 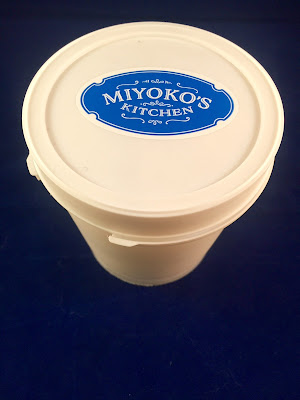 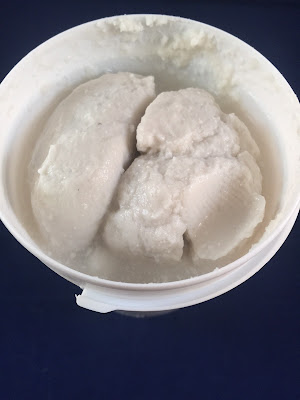 They're really soft though. So you have to be careful when removing them. As for flavor, they have a mild aged flavor that really does taste like dairy mozzarella. There's a slight tang that comes from the cultures. And the cheese practically melts in your mouth. It's so smooth and creamy! 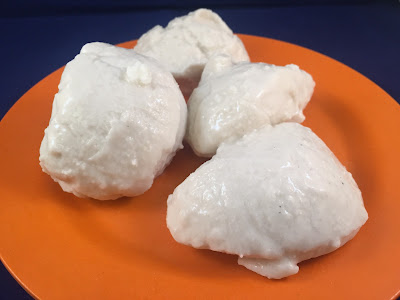 Miyoko's Creamery's website says the fresh mozzarella melts well, and I almost put some on a pizza. But then I remembered that fresh mozzarella is best enjoyed fresh, so you can really appreciate the flavor and texture. I considered making a caprese salad, but that seemed so obvious. So I googled around and found this recipe for Buffalo Mozzarella with Balsamic-Glazed Plums, Pine Nuts, & Mint from the Food 52 website. And then I veganized it! 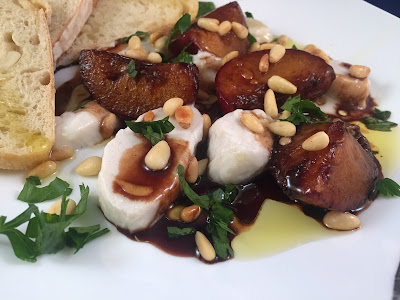 I'm not going to reprint the recipe because I didn't change anything, except for substituting the vegan Miyoko's Creamery mozzarella for dairy mozzarella. You can find that recipe here. But in a nutshell, you basically reduce balsamic vinegar until it forms a thick, sweet syrup. Then you add some sliced plums and cook them down in the syrup just a tad. Slice the mozzarella, drizzle with the glaze and plums, sprinkle with toasted pine nuts, and top off with a little olive oil and mint. I served mine with some crusty garlic bread for sopping up the yummy glaze.

Miyoko's Creamery is currently sold out of the Fresh Buffalo-Style Mozzarella. But check back soon (here's the site) because this stuff is awesome!
Posted by Bianca at 10:24 PM

I wanted to try this! My family is a bunch of cheese lovers, and mozzarella with tomato slices is a common app during holidays. I would love to be able to have it again.

Oh my goodness!!!!! Anything 'buffalo' is up my alley!