When it comes to talking about my next cookbook project (a retro vegan recipe collection), I've mostly been sharing pictures of recipes from the turn of the 20th century. At least lately. That's because, after a couple years of developing recipes all willy-nilly over the decades, I decided to start working in chronological order. I went back and started with 1900-1909 and then on to 1910-1919. And I still have much work to do in those decades (mostly need to fill out the desserts for those chapters).

But sometimes, I like to jump around and make something from a more recent decade. Last week, I veganized a 1983 Southern Living recipe for Cheezy Spaghetti with Mushrooms. 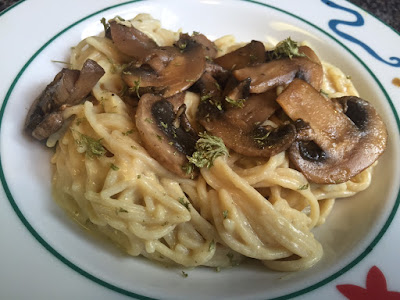 Technically, the 1983 recipe was a three-cheese spaghetti, but since I was making it vegan, I figured that was a little too over the top. One cheeze is plenty. Especially when that cheeze is nooch sauce. That was the basis for this super-simple pasta dish. Sure, I could have gone with melted Daiya or Follow Your Heart. That would have been delicious, but what would a good '80s vegan do? Use nooch! Because that's all they had back then.

So, let this dish be a celebration of the original vegan cheese — Nutritional Yeast!!! And just for fun, here's the recipe.

Boil the spaghetti according to package directions. Drain. Set aside.

In a large saucepan, combine the nutritional yeast, flour, 1/2 tsp. garlic powder, and salt. Stir until well combined. Add the almond milk and water, and whisk until the lumps are gone. Turn on medium-high heat and bring to a boil. Simmer and whisk continuously until the sauce thickens like a gravy. Turn off the heat and stir in 1 Tbsp. margarine and the mustard. Stir until margarine melts.

Just made this for dinner (doubled it for one pound of pasta). Also added some better than boullion and less salt in the sauce. So comfort-foodie and delicious!

Wow, it is one of my favorite but I haven't had the chance to prepare this lately. So, I am going to give this a shot. Anyway, thanks for sharing.

Wanted to make this for supper, but I only had the nooch and vegan margarine. Made a very pared down version. Still good, but now I am going to get the other stuff!