Hey y'all! This is my last installment in the "what I ate while attending the annual Association of Alternative Newsweeklies conference in Nashville" series. I spent last Thursday through Sunday morning in Music City for the yearly meet-up of editors, publishers, designers, reporters, marketing folks, and ad sales staff of alt-weeklies from across the country. I'm an editor and reporter at the Memphis Flyer.

You can see what I ate Thursday and Friday in my last two posts. But this post is all about Saturday (plus, my breakfast Sunday before hitting the road back home). On Saturday morning, I woke up way too early after going to bed around 3 a.m. the night before. Ugh. But my tummy was growling. Often, on weekends, I'm awakened by hunger, even if I ate right before bed. It's crazy! I only had bars and snacky things in my hotel room, so I decided to venture out in search of food.

I found a burrito shop open at 10:30 a.m.! Oscar's Taco Shop is a little hole-in-the-wall kinda place with a service counter and a couple of tables. But I spied a Vegetarian Burrito on the menu, and I knew I'd be alright. I ordered one with no cheese or sour cream. It was loaded with beans, guacamole, salsa, and rice. 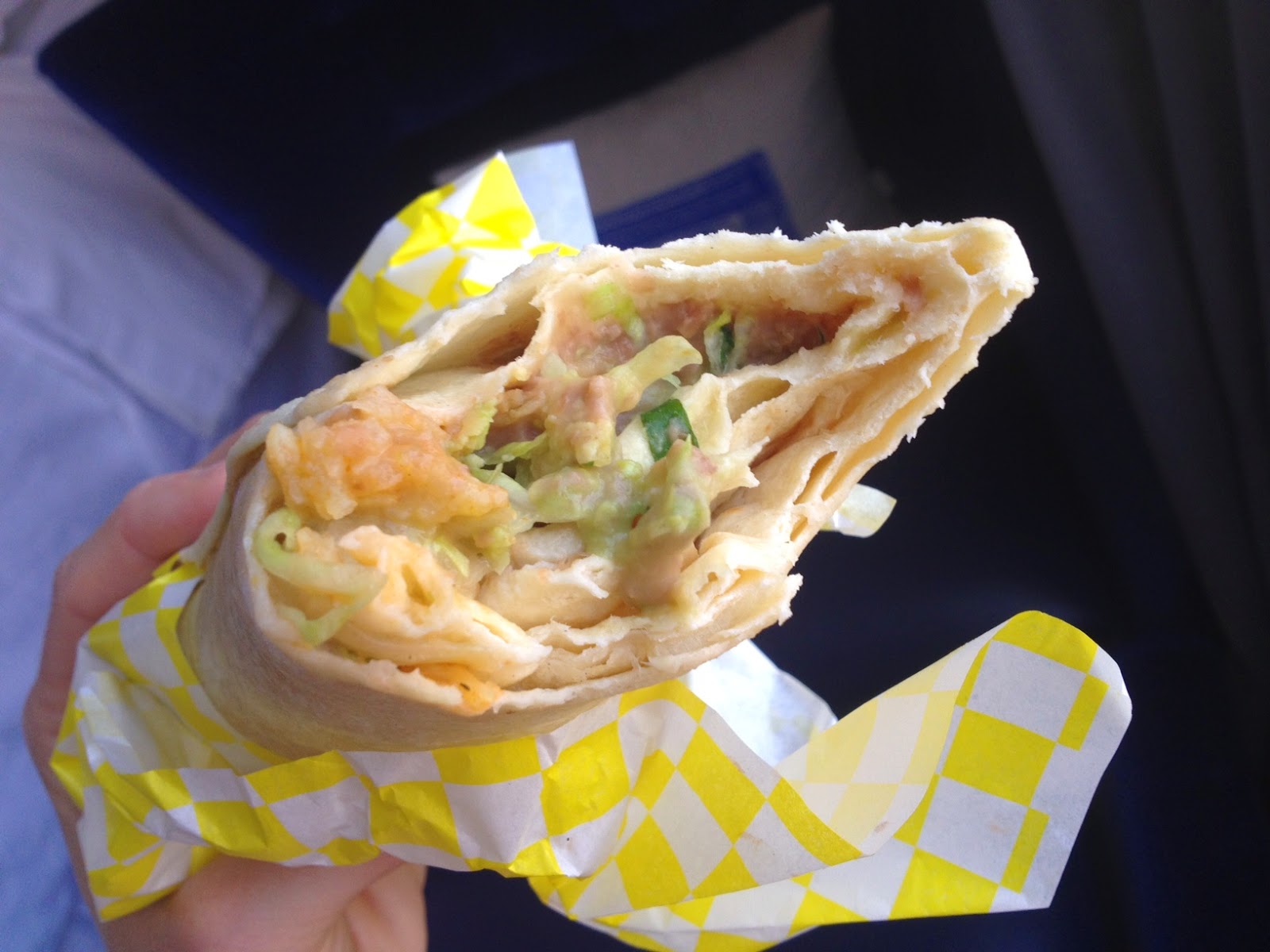 (Disclaimer: Before someone asks me if I checked on the vegan-ness of the beans, I'll tell ya. I didn't. I have a policy about that when eating out at Mexican joints.  If the menu says "vegetarian," I take their word and hope for the best. Part of that is about self-preservation. When I'm hungry and it's all there is, I'll take it and cross my fingers. But it's also about not being the vegan who asks the server ten million questions and makes veganism seem hard. My goal is spreading the vegan word, not being perfect.)

Of course, I had to order Chips and Salsa on the side. Breakfast of champions. 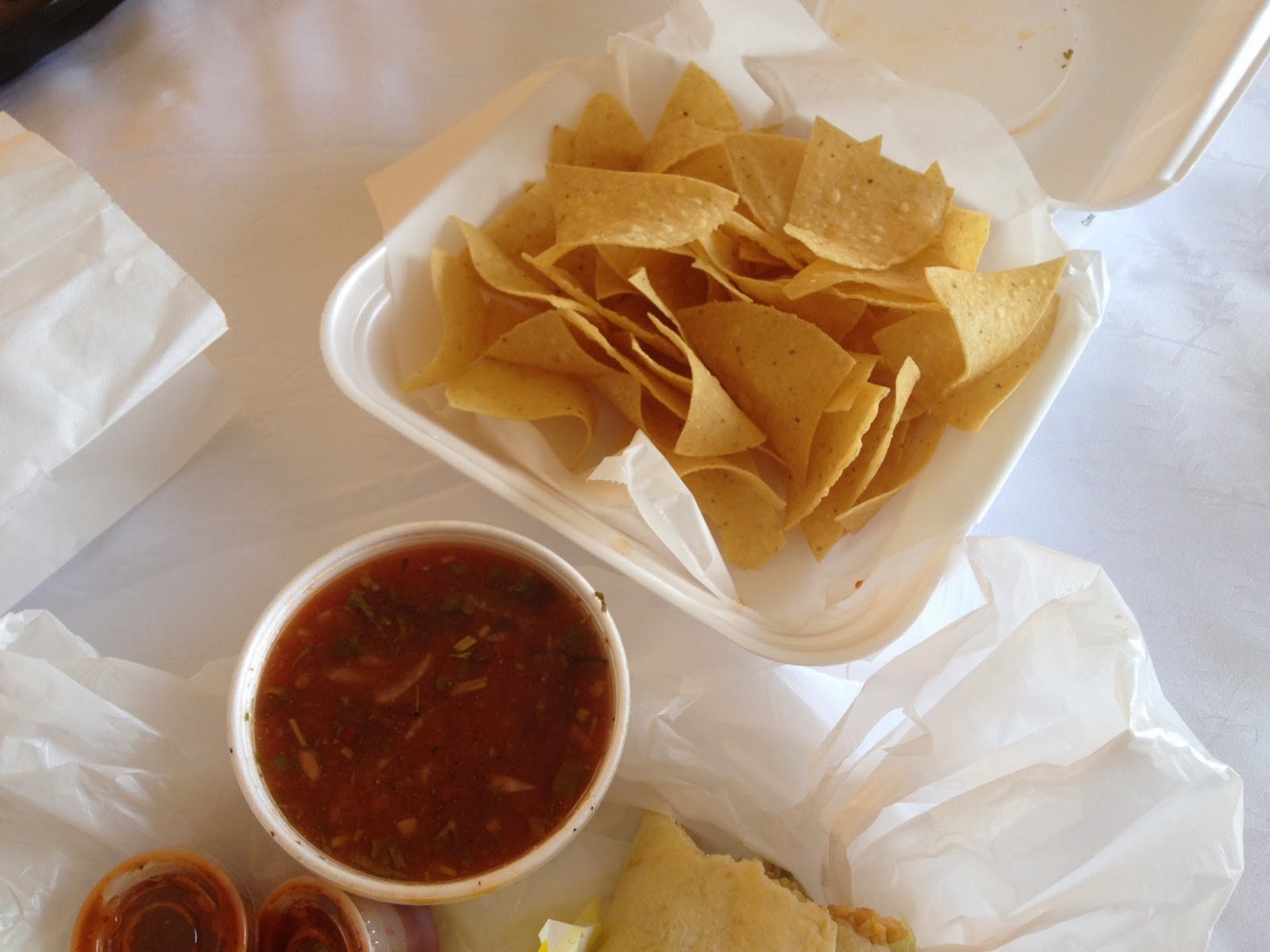 That burrito meal wasn't the best I've ever had, but it did the trick of staving off my hunger (and my slight hangover). It also kept me full for hours. I attended a few conference workshops (one on long-form journalism and one on food writing), and then I rested up in my room for the annual AAN awards ceremony.

I was up for an award this year in the Diversity Reporting category for a cover story I wrote last August called "Nice Day for a Gay Wedding." My newspaper rarely even gets nominated, so this was pretty exciting! But I read the stories I was up against (one from Folio Weekly and one from INDY Week), and they were very good. I was certain I wouldn't win. I snacked on some hummus, veggies, and homemade potato chips at the ceremony and sipped on free wine. And then guess what? When they got to my category, I heard my name! What?! I actually won first place! My award was this medal (which was placed around my neck by a drag queen), a tiny plastic pink cowboy hat, and a shot of Lynchburg Lemonade. 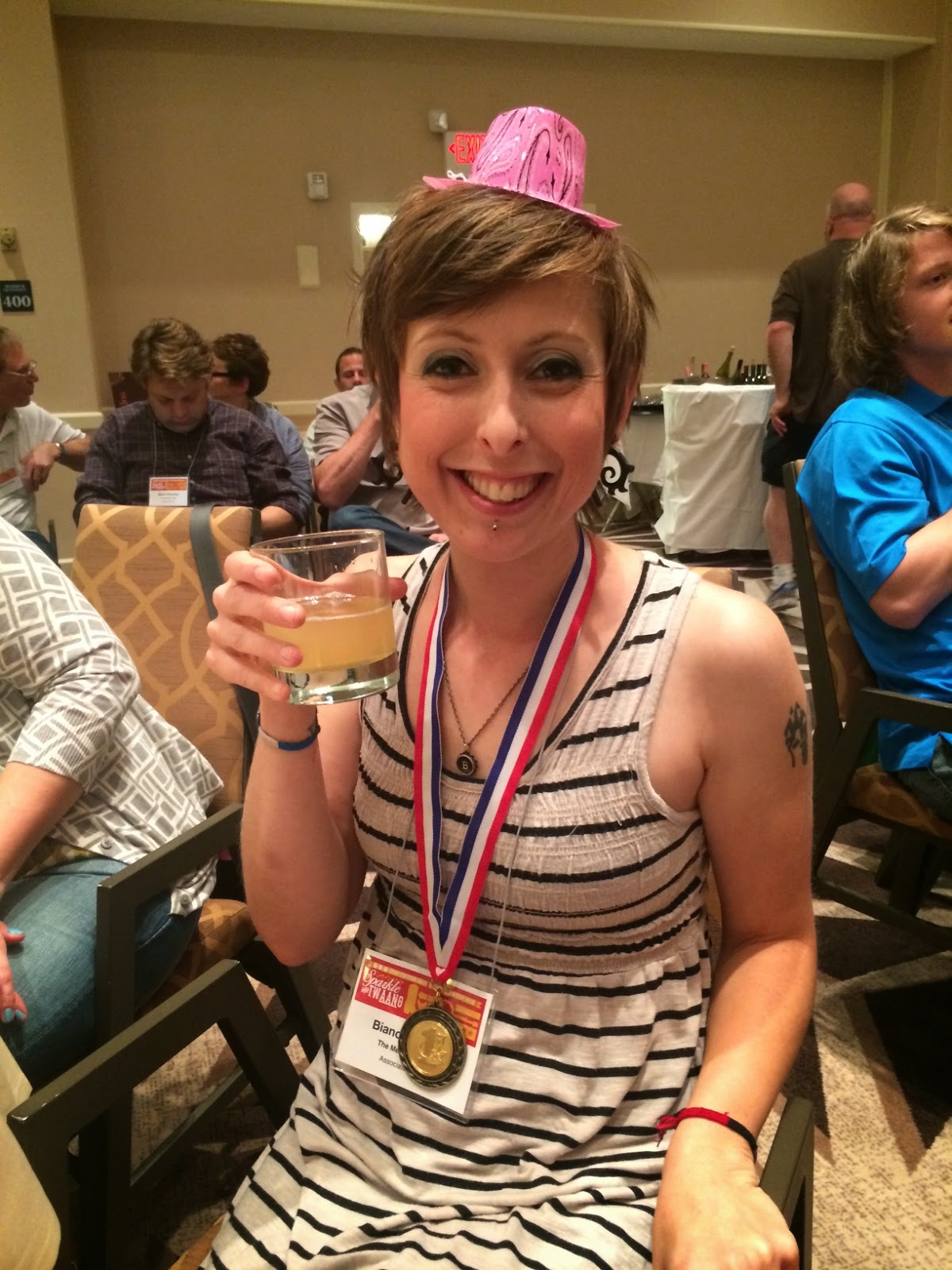 After the awards ceremony, my co-worker Mark (a vegetarian) and I took a Lyft car to East Nashville to dine at my very favorite Nashville vegan restaurant — The Wild Cow! 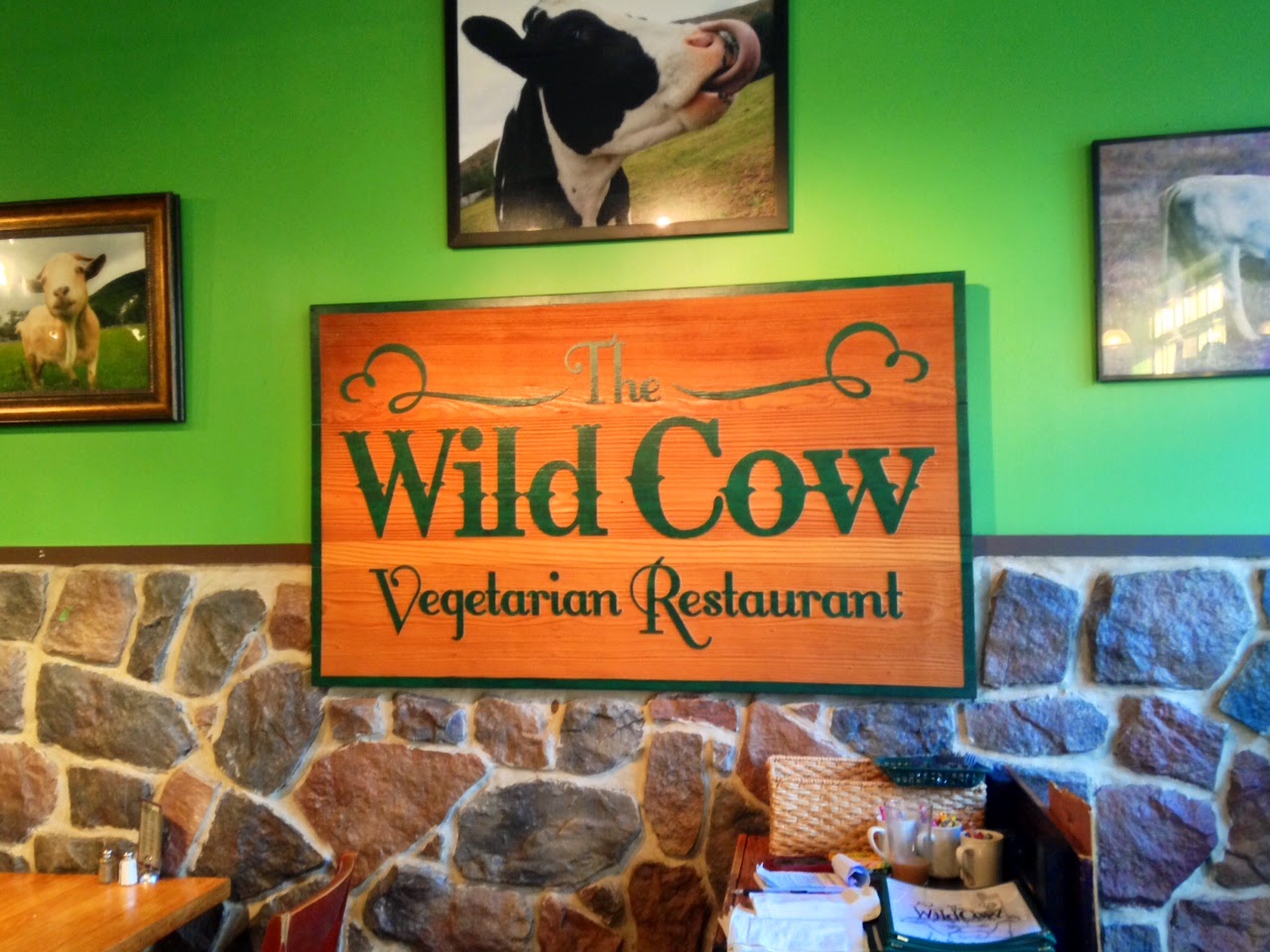 No trip to Nashville is complete without a visit to the Wild Cow. I always stop in for a meal or two. This time, I ordered the Peanut Tempeh Tacos with Avocado and Garlic Aioli and a side of Lentil Stew with Garlic Aioli. 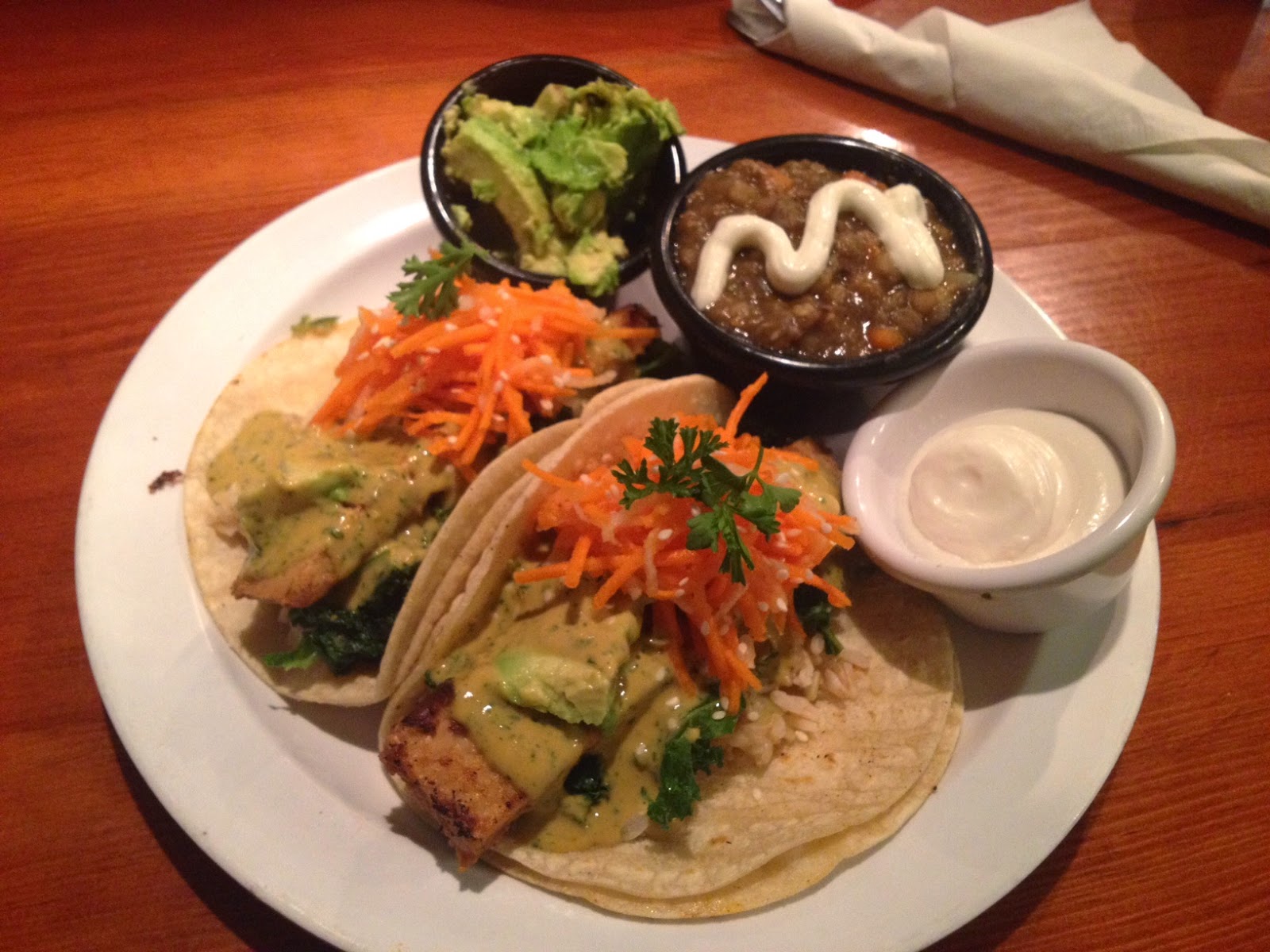 Their garlic aioli is magical, so I like to order it on as many things as I can. The tacos were perfect with big chunks of peanut-y tempeh and a carrot-daikon slaw. And the lentil stew is a long-time fave of mine. Sometimes I order it as an appetizer and sometimes as a side. 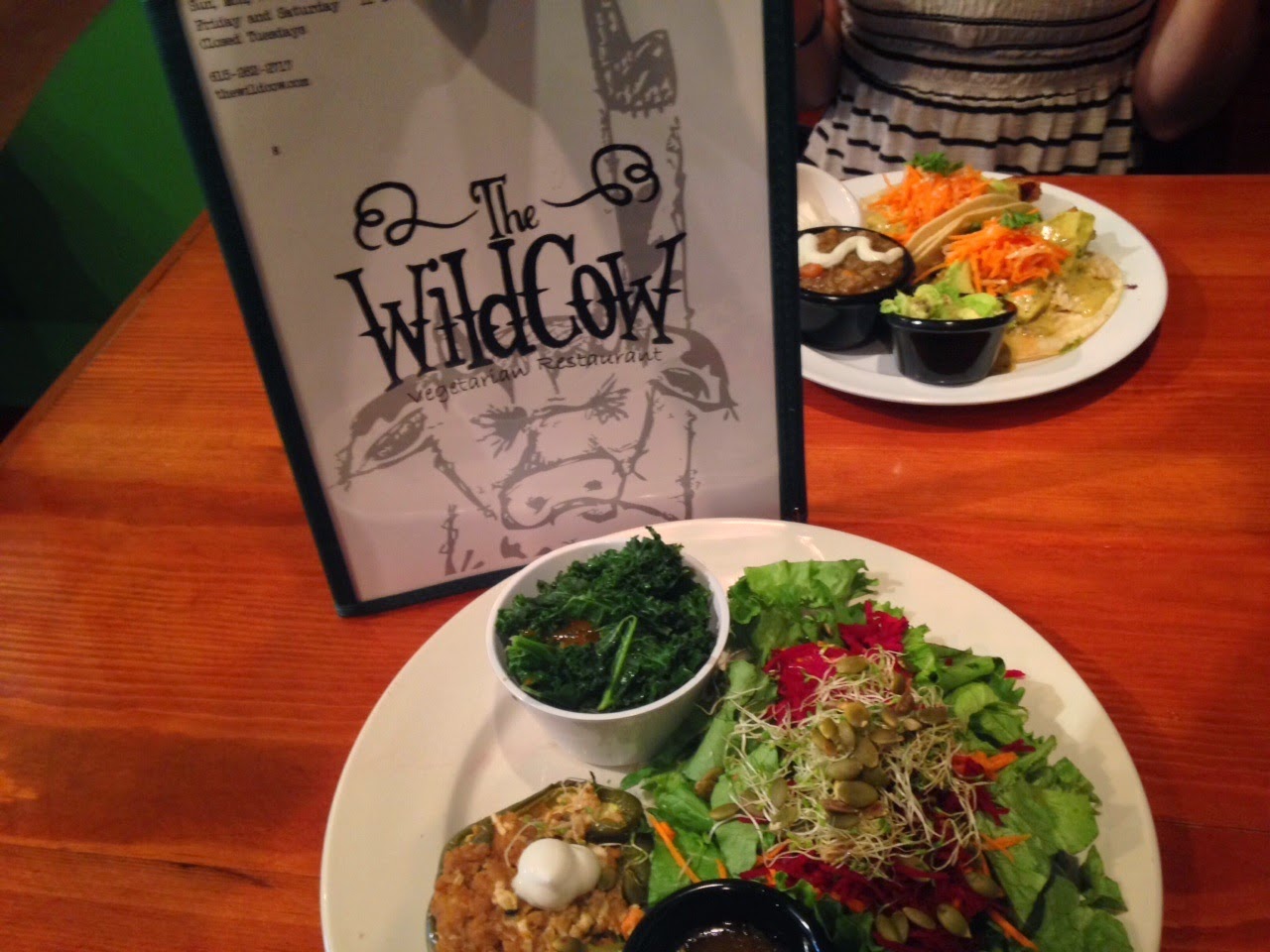 Before we left the restaurant, I had the foresight to order an extra meal to eat for breakfast Sunday morning. I planned to wake up at 6 a.m. to head home, and I knew I didn't want to try searching for burritos that early! Since my hotel didn't have a fridge or microwave, I went with something I knew would taste good at room temp and hold up okay overnight — Chickpea Salad Wrap and Couscous Salad with Sundried Tomatoes, Kalamata Olives, Sliced Almonds, and Caramelized Onions. 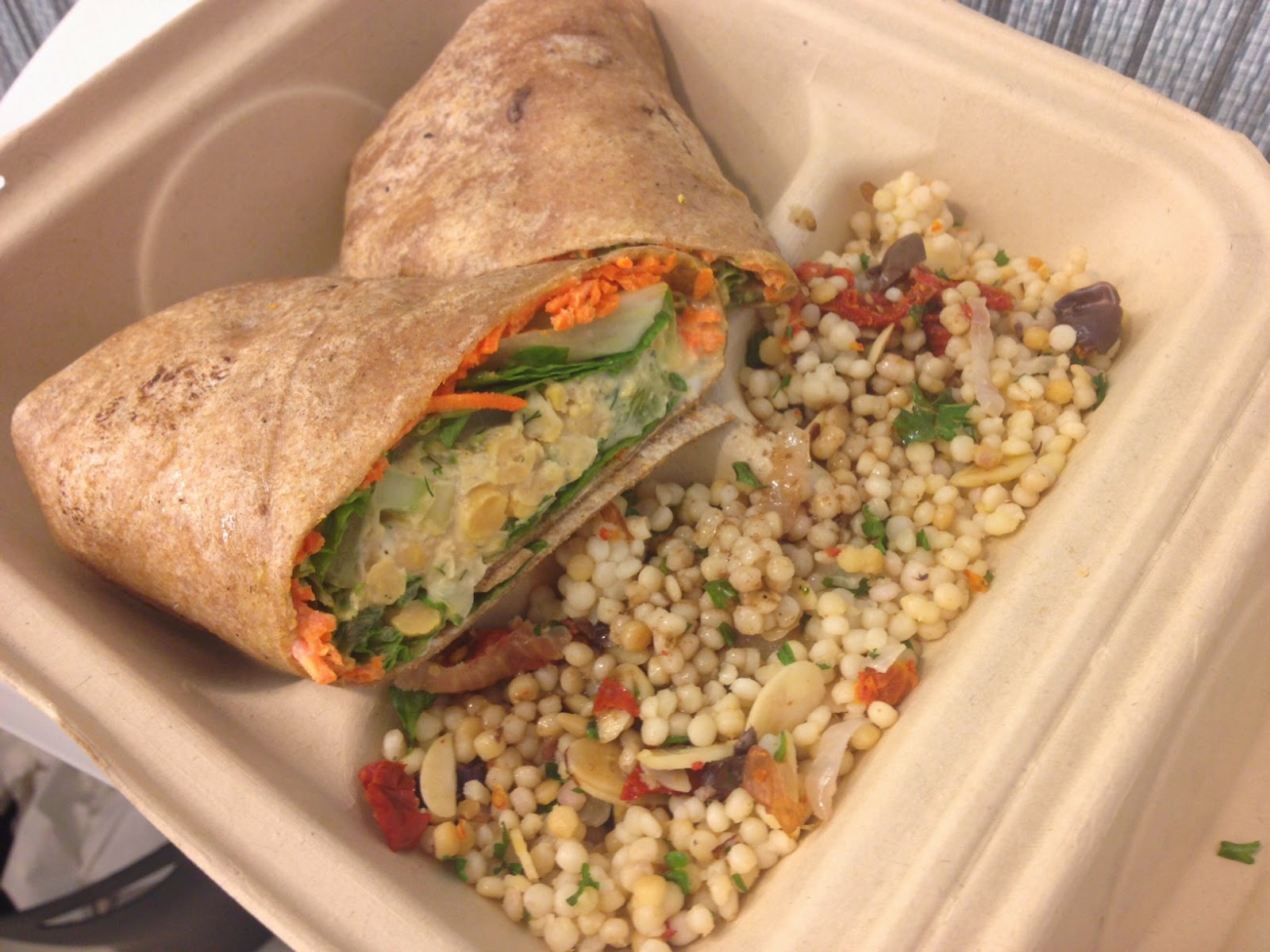 Damn, this hit the spot Sunday morning. I did wake up very hungry. The chickpea salad was loaded with creamy Vegenaise, and the couscous was the big chunky Israeli kind. Yum!

That's all for Nashville! I found so much vegan goodness in Music City. Memphis and Nashville have a little rivalry, and I always kind of want to dislike the place. But with such awesome vegan food, I can't help but love it.
Posted by Bianca at 10:10 PM

Can you say what the difference between vegetarian beans and vegan beans would be? I always assume that if beans aren't cooked in chicken or beef broth, they'd be vegan as well as vegetarian, no? What else would they throw in there?
my sister went to school in Nashville, and when my folks + brother visited her (I am not much of a traveler) they loved Wild Cow. Wish I had made it down.
Congratulations on yr win!

So much tasty looking food in this post, I can't wait to visit Nashville one day. The Wild Cow looks awesome (and such a cute name!), I looove garlic aioli so I'd definitely order that on the side of something and good job having the foresight to order breakfast to go. Congrat's on the award too, your article sounds totally deserving of the top prize.

Foodfeud, I just meant that I didn't check to make sure they didn't use lard or something. They say "vegetarian" on the menu, but I always suspect that some places may still use lard beans in their vegetarian meals. But I don't ask because I don't really wanna know. :-)

Yum! I love Wild Cow! Sure wish I could eat there more often!

Nice! You're making me miss the old homestead. I used to eat at Wild Cow every single Thursday night when I lived there. Did you get a chance to try Chuy's?

Congrats on your award, Bianca! That is seriously awesome. It's certainly nice to be recognized by your peers. And kudos again on your attitude toward veganism - I think it's absolutely refreshing that you have a healthy view towards food and the balance between being a "perfect" vegan and being a vegan who is also kind to herself. FWIW, I was vegan for 7 years and also adopted the same attitude when dining out. I'm no longer vegan, but I still read your blog because I think you're rad! :)

Congrats on the award! Awesome :) And I love your vegan attitude. Very wise and totally sensible. I always enjoy your posts. Wide variety of topics, recipe inspiration, brevity and wit, and a punk-ass perspective that makes me smile. Cheers.

I also trust them when they say vegetarian- and most places don't even use lard anymore because its more expensive than vegetable shortening.
Brilliant move with the breakfast order the night before! Somehow no matter what i ate the night before if i was drinking anything i wake up ready to eat my hand- which is weird since i usually have breakfast an hour or so after i'm up.
Congrats on the well deserved award!! Hope they gave you a raise :))
Ttrockwood

I love The Wild Cow, though I don't get over there often. Getting there from anywhere that's not East Nashville is a challenge. We West-siders joke about what it takes to get us to "cross the river." :)