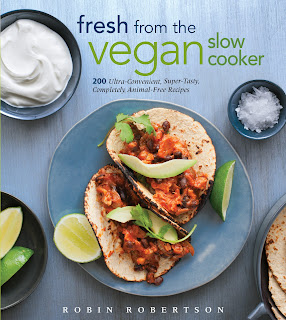 Confession: I was asked to be on a "virtual book tour" for Robin Robertson's new cookbook, Fresh from the Vegan Slow Cooker. Last week! Yes, I was scheduled to review this book last week. But last week was CRAZY with cooking for Pecha Kucha and trying to pull together a last-minute cover story at work.

And I know what you're thinking: The whole point of a slow cooker recipe is to save time when you're too busy to spend much time in the kitchen. But making any recipe involves planning, and I knew that what I wanted to make from this book involved two recipes. So I asked for an extension, and my new review date is today.

Now that I've had some time to play in the kitchen, I've discovered something beautiful. You can make a stew with a biscuit topping IN THE SLOW COOKER! Yes, that would be a slow cooker pot pie. When I saw Robin's recipe for Rustic Potpie Topped with Chive Biscuits, there was no question about what I'd try first. 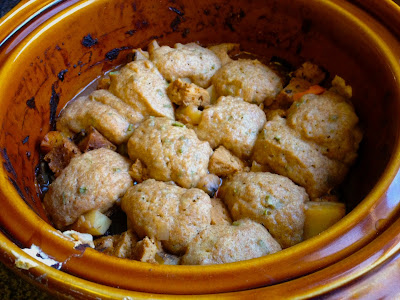 I know this isn't the sexiest picture, but stuff isn't always very pretty in the Crock Pot bowl. Stuff gets stuck to the sides and it dries. But nonetheless, this was one damn good potpie. The potpie part is made from seitan, potatoes, carrots, and a gravy made from tomato sauce and herbs. The topping is made by dropping wet, chive-flecked biscuit dough onto the hot stew and allowing the pot to steam the bread. Amazing!

Here's a much prettier shot of my potpie on a plate: 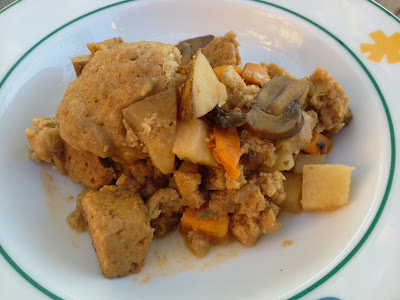 That big wheaty thing on the left is a biscuit, and the smaller wheaty things are chunks of homemade seitan. I also used Robin's Seitan in the Slow Cooker recipe for this. I've tried all kinds of ways to make seitan — boiling, steaming, baking — but this was the first time I'd attempted making it in the slow cooker. The texture was very similar to the boiled seitan method, which is what I typically make. It's soft, yet still chewy.

This was only the first recipe I've tried from Fresh from the Vegan Slow Cooker, but I have bookmarked a ton. There are 200 recipes in here, and so many sound delicious. I'm intrigued by Lasagna Primavera (lasagna in a slow cooker!!!), Mom-Style Vegan Meatloaf, and Hoison and Miso-Braised Tofu. There's a whole chapter on making stuffed veggies in the slow cooker, like stuffed bell peppers and stuffed squash. And there are even instructions for slow cooker tofu scramble in the breakfast chapter.

And let's not forget dessert! I've only ever made slow cooker dessert once — a pear cake — and it was pretty tasty. But Robin's recipes take sweet endings to the next level. I mean, Three-Way Pumpkin Bread Pudding! Chocolate Truffle Cake! Chocolate-Peanut Butter Cheesecake! No way!
Posted by Bianca at 10:54 PM

I'm tempted to get this cookbook. I have a slowcooker but I rarely use it if it's not for baked beans. There seems to have been a ton of vegan slow cooker books coming out these days, so I have to decide on one. I like Robin though, so I might choose that one. I have Vegan Planet, which is pretty cool, and Vegan on the Cheap, which I love.

Hoison and Miso-Braised Tofu in a slow cooker exotically cool, but today, when it's 50 degrees and raining outside, that Rustic Potpie Topped with Chive Biscuits would be my first choice too! And I wouldn't pass up a little slow cooker cake either. :)

That looks delicious...especially the biscuits and seitan! And with fall coming, it's perfect!

The pot pie actually looks really good. I'm so happy for slow cooker meals this Fall and Winter. I haven't tried desserts yet, but I bet they make the house smell great.