Until today, I'd never tried a Quorn product. The U.K.-based vegetarian meat company makes all sorts of faux fare, from burgers and turk'y roasts to chick'n cutlets and chick'n nuggets, made out of mycoprotein (an edible fungi like truffles, morels and mushrooms). Unfortunately, their products have all contained eggs for years.

But thanks to Compassion Over Killing, Quorn agreed to release a new vegan burger! While I was on my cleanse, a sample box of frozen Quorn Vegan Burgers arrived in the mail. But since I was avoiding processed food throughout the cleanse, that meant no packaged veggie burgers. But three days after my Crazy Sexy Cleanse was over, I ripped right into that frozen package to give them a try: 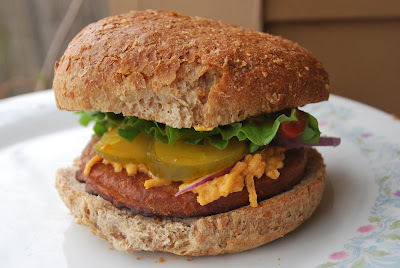 Wow! That is a burger. I like my pre-made patties meaty and toothsome, and that's exactly what this is. It reminds me of some of the non-vegan, pre-made patties that I loved as a vegetarian kid, like Morningstar Farms Grillers. For some reason, many of the commercially available vegan versions of burgers (like from Boca and Morningstar Farms) just aren't as tasty as their egg-y counterparts. But the Quorn burger is right up there with the best. The burger is also similar in texture to the Soy Boy Okara Courage Burgers. Those are a little harder to come by, but they boast the same hearty texture.

Since the Quorn burgers are made from mycoprotein, they're actually soy-free. So these would be a good choice for vegans with soy allergies (bless their hearts).

Besides releasing a vegan burger, the Compassion Over Killing website says Quorn has also vowed to reduce its use of eggs overall. Yea for Quorn!!!
Posted by Bianca at 10:59 PM

I love Quorn products (I still eat eggs). Sadly, the are not available in Canada, so I have to take a giant cooler and ice packs across the border to stock up. I've never tried their burger, but your enthusiastic review has me adding them to my list.

I have just heard that Quorn was coming to New Zealand, and was wondering about it - now I will try !Perfect timing to read this post.

Thats great news! In my pre-vegan days I actually ate a ton of Quorn. I didn't buy eggs but I would eat them in baked goods or Quorn. Then I looked at the products Quorn sells in the UK and saw they used "non-battery" eggs. I was really disgusted that I was eating battery eggs. It really made me open my eyes. I went vegan soon after.

Glad to hear Quorn is going to use less eggs!

hooray for quorn using less eggs! and i love your presentation of the burger, no one would ever guess it was vegan!

SO excited for them! I can't tell you how many times I've passed their products in the grocery store or had people ask me "have you heard of Quorn?" always wishing it was vegan!
This is very exciting!! :) the burger looks so delicious!

i was eating a lot of chicken quorn in the Uk and had no idea it was vegetarian and contained eggs. thanks for the info, so interesting! Its quite difficult to find proper burger patties here in Austria.. and dont let me get started on the buns. we have the best bread in the world (everything is with spelt, rye, kamut, millet and whole wheat) but no nice burger ingredients to find anywhere.

Quorn is the brand name of meat substitutes that are made from a vat-grown fungus. Some people have dangerous allergic reactions to the fungus and suffer nausea, vomiting, diarrhea, and occasionally hives or difficulty breathing. Some people react the first time they eat Quorn, while some react only after building up a sensitivity.

Medical studies have proven that Quorn's fungal ingredient is an allergen, but the U.S. Food and Drug Administration and the United Kingdom's Food Standards Agency still allow its sale. The Center for Science in the Public Interest, a non-profit food-safety organization based in Washington, D.C., has heard from more than 1,500 consumers in Europe and the United States who have suffered reactions to Quorn.

Despite what some of the manufacturer's (Marlow Foods) marketing materials indicate, the fungus used in Quorn is only distantly related to mushrooms, truffles, or morels. While all are members of the fungus kingdom, Quorn is made from a less appetizing fungus (or mold) called Fusarium venenatum.

CSPI urges consumers to avoid Quorn and urges natural-foods retailers like Whole Foods not to sell this product that is dangerous to sensitive individuals.

I'm glad you chose to cover this great change made by a giant retailer! Those who love Quorn and those who hate Quorn can all agree that their reduced use of eggs means real change for chickens! Yay for Compassion Over Killing!

That is great news! Quorn boxes always have the most tempting images...pure torture... these, however, will always be my favorite vegan burgers...SO good! (wheat & soy free too)

Have you had this brand??

The stuff Guitar Adoption posted is for real. I mean, I used to eat Quorn products when I was vegetarian with no adverse effects, but Joel recently tried some and had a really bad allergic reaction - he was like, violently ill all day after eating it. So, everyone's different, but it is kind of gross to think about eating mold? hahaha

On the allergic reaction issue: Sheridan, I remember when that happened to Joel! And I thought about that when I tried the burgers, but I was fine after eating it. I don't think I'm allergic to anything, so I'm not worried. But allergen-sensitive folks might want to watch out.

Very cool! I look forward to trying them! I only had Quorn once as a vegetarian, but I enjoyed it. I was in Switzerland, and they served it at a vegetarian restaurant in Zurich. I remember being so confused that it was a corn mushroom that tasted like meat! :D

Thanks for the shout-out, and so glad you liked the Quorn burger. The photo is great too! We were thrilled the company was so receptive to adding a vegan product and that they committed to reducing eggs in other products as well. We reposted your blog on the COK and COK-LA FB pages. Check it out!

Whoaaa, exciting. I remember loving Quorn sausages when I was not-vegan in the UK years ago and being sad when I came home and couldn't get them. This burger sounds great, I'm totally not a fan of most vegan burger patties in stores either. Now for a trip to the US or UK to try this thing, ha.

I loved Quorn when I went vegetarian, though I didn't miss it so much when I went vegan (so many things to try!) I then was happy to hear they were coming out with a vegan patty! Then I was sad to hear folks were having severe allergic reactions to Quorn products!

I may give it a try if I happen to see it locally, but there are a lot of great vegan burgers out there to taste, especially ones I make myself! (I may be biased.)

It's been years since I've had a Quorn product due to them using eggs. Yay for them and yay for us! ha!

I read about Quorn in my Fungal Biology textbook. Haha. It's very interesting how it's made...

But yeah, if you think you have a mold allergy (like, you're allergic to penicillin and stuff), I would avoid it.

Good news! I had heard a long time ago that they were going to get rid of eggs in at least some of their products. I hope they continue with this.

Really, burgers are not my thing, but I do love a good "chick-un" nugget.

I wonder how long it will take them to get to the States?

They are great! Aren't they?! We love them! Best thing ever for working people :-) Love your blog, by the way... I've been following it way before I moved to Memphis. And somehow I ended up here. Go figure!

sweet! I can't wait to find these in the store so I can review them :)

Thanks for giving us a heads up. Before reading this article, I didn't know Quorn had anything vegan. I remember I used to like their products before going vegan. I emailed them several times asking them to make vegan products, but they didn't seem to care.

I ate quorn twice and was violently sick afterwards on both occasions. I don't believe that my digestive system has been the same since.
There is a small but significant proportion of people who suffer allergic reactions and people should be aware before eating this.

I ate Quorn twice and on both occasions was violently sick afterwards. I believe that my digestive system has not been the same since.
If you look on the web there are a small but significant number of people who are allergic to Quorn and I believe that people should be made aware of this before eating it.

Hi there, I found your blog when I was researching for an entry I wrote on mine. Thanks for the tip. I linked to yours here: http://somethingrandomnowandthen.blogspot.co.uk/2013/05/i-am-sick-of-it-carnivores-healing.html

Hi there, I found your blog when I was researching for an entry I wrote on mine. Thanks for the tip. I linked to yours here: http://somethingrandomnowandthen.blogspot.co.uk/2013/05/i-am-sick-of-it-carnivores-healing.html

(not sure if it posted it the first time :-) sorry if it comes up twice)

My nephew just passed away from eating this product. He ate it and immediately had a scratchy throat then he couldn't breath then died hours later. He was allergic to mold which this product is derived from.

Suzanne, I am so sorry to hear that!

Suzanne that is awful. I have read that although ppl have suffered allergic reactions, there have been no fatalities as a result of eating Quorn. I hope you reported this to the FDA via the attending doctor.