I first tried the Crazy Sexy Diet Adventure Cleanse in January 2010, and although I finished successfully (for the most part), I swore I'd never do it again. But here I am in 2012 embarking on cancer survivor/author/unicorn goddess Kris Carr's 21-day cleanse once again. No caffeine. No alcohol. No gluten. No sugar. No processed food. And of course, no meat or dairy (but that's the easy part). Instead, I'm drinking loads of green juice and eating as much alkaline plants as possible.

Unlike last time, I understand why I'm doing this cleanse. So I think I'll take it more seriously. This time, I read all of Carr's Crazy Sexy Diet book before starting. Since the book wasn't out yet in 2010, I first read about the cleanse on Carr's Crazy Sexy Life website. But in doing so, I skipped all the boring stuff, like all that talk about ph balancing the body. Well, now I realize that balancing the ph is sort of the whole point of temporarily giving up all the good stuff, like booze and sugar.

I've been testing my pee on little ph litmus strips for a few weeks now, and my body is way out of whack. I'm, like, pure acid ... probably because I've been living on caffeine, fried food, and sugar all throughout December.

Anyway, I think the cleanse will be easier this time since I know why I'm doing it. You can read more about ph here, but I won't bore you with the deets. Instead, I'll show you what I ate on day one today. All recipes are from the Crazy Sexy Diet cookbook.

My morning started with this tall glass of Make Juice, Not War — kale, romaine, broccoli stems, ginger, pear, and cucumber — served in my favorite beer glass: 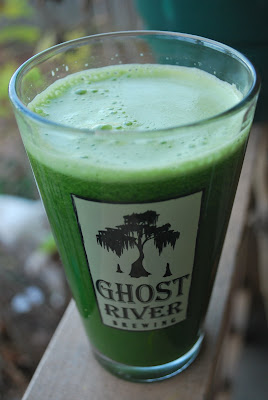 By mid-morning, I was FAMISHED!! But Carr suggests trying to make it until noon on green juice alone, if possible. So I thought I'd give it my best shot. I made it until 11 a.m., and I had to eat this Green Apple: 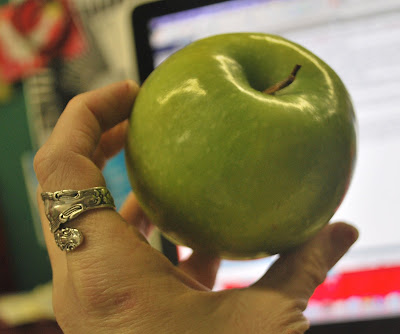 The apple helped, but it didn't really satisfy. However, I waited until noon to chow down on this massive veggie plate — Choosing Raw "Peanut" Noodles made with zucchini, carrots, pepper, and cucumber and Steamed Broccoli with Nooch: 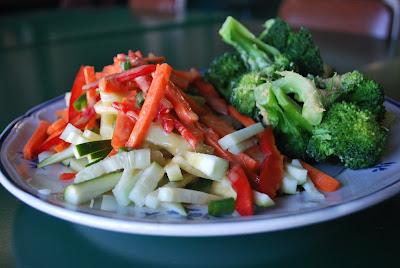 I needed some protein by about 2 p.m., so I snacked on an ounce of White Chocolate Sprouted Nuts from Living Intentions Gone Nuts. My dad ordered these for me (along with other goodies from Vegan Essentials) for Christmas: 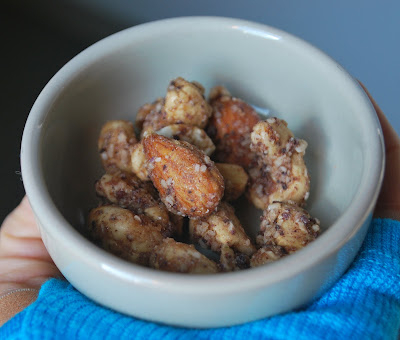 Before hitting the gym, I snacked on two brown rice cakes with garlic hummus, but I forgot to photograph them. Those kept me pretty satisfied until dinner, which was by far the most delicious meal of the day. I had this Buddha Bowl with brown rice, chickpeas, broccoli, carrot, olives, onion, hemp seeds, flaxseed, avocado, and cayenne: 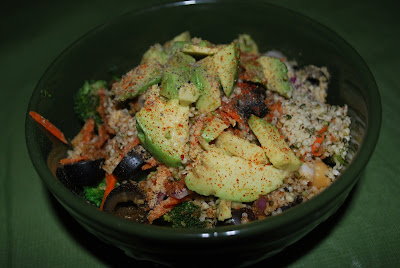 And this big ole salad, which I'm calling the Kris Carr Salad: 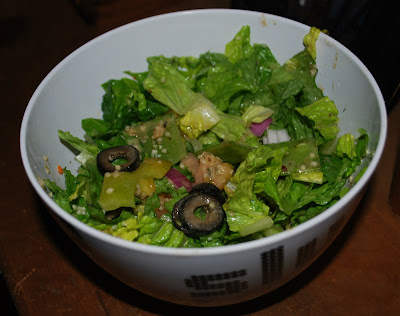 The salad isn't from a recipe in the book, but it's mentioned in the daily readings Carr provides throughout the cleanse. She says this salad of romaine, olives, tomatoes, snap peas, hemp seeds, and agave-mustard dressing is a standard in her house, so I gave it a try. Delicious!

Well, day one was a success. Even though I was hungry for most of the morning, my lunch, snacks, and dinner kept me satisfied. Carr suggests adding a heartier mid-morning snack or smoothie if you can't survive on juice alone, so I'll probably be doing that for the rest of the cleanse.
Posted by Bianca at 10:43 PM

You day looked delicious -- though I would be with you, juice doesn't tide me over than long!

I'm not cleansing this year (but I am getting back to some of my healthy basics) so I look forward to reading your updates and trying some of your recipes!

congrats on doing another cleanse even though you swore you'd never do it again(definitely going to read that post!). everything you ate looks SO delicious. i'm a big salad and veggies gal ;) those white chocolate nuts look unbelievably amazing, though. i think i'm gonna have to buy out vegan essentials soon ;)

The Buddha Bowl looks really tasty. Also, what is the agave-mustard dressing on the salad? Would love to try that... especially know Kris approves!!

Yeah, I have a really hard time with just juice, too. But I'm the kind of person who needs a big feast in the morning, lest I transform into Allysia the grouch. Yay Buddha bowl! And good luck with your cleanse!

Hey Sasha. The dressing was just a little Dijon mustard mixed with agave. That's it. Easy and delicious.

Everything looks delicious!! I am with you the juice would not last long with me also, I am going to have to try the Budda bowl soon. Have a great day!!

Congrats on doing this again! I think I'd like to try it sometime, but January is the worst month because it's my birthday and I want beer and cake!

Also, I am totally curious to start checking my pH levels now.

Everything looks awesome!! I love that juice recipe. I am making it every other day now in a big batch and sipping a couple times a day!

I don't think I'd be able to have juice only for a whole morning... but then again, I eat way too much food.

Don't hesitate to show us what else you eat during the cleanse, I find it very interesting. I'd like to do such a cleanse one day.

Your food looks good, and the points here are interesting. I'd been wondering as of late if I'm too acidic (I'm feeling that way somehow, but I have no proof of such a thing). I need to see if I can look up that book sometime.

Crazy Sexy Diet is in the mail on its way to me, and I'm really looking forward to reading it. Not sure I'll do a full on cleanse though...juice would totally not hold me until noon! The times I've cleansed before it's been juice for breakfast and a smoothie for an AM snack.

Hi! I just stumbled upon your blog and love it. I am starting the 21 day cleanse today and I was wondering if you have any tips on getting started with the shopping list? Did you shop day to day or week by week? Any info is much appreciated!