Winter Solstice doesn't happen until December 21st, but some friends and I celebrated the solstice a little early with a Yule potluck at Neshoba Unitarian Universalist Church last Saturday. We grubbed on hearty winter foods, and some folks acted out the mythical battle between the Oak King and the Holly King.

It wasn't a vegan potluck. In fact, I was the only vegan there, but there were a couple of vegetarians. To ensure I had plenty to eat, I brought an entree and dessert. On the savory side, I brought this Crock Pot filled with my Chipotle Chickpea Chili: 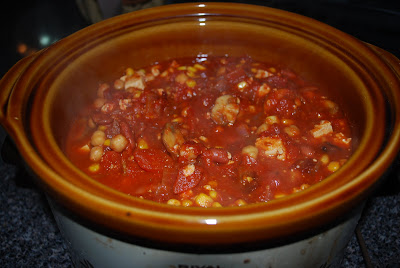 The recipe is going in my cookbook. It's a smoky, hearty chili with chickpeas, kidney beans, and cubes of tofu. Oh, and mushrooms ... because every batch of chili needs mushrooms. Sorry for the crappy, steamy washed-out photo!

For dessert, I brought this Coconut Icebox Cake: 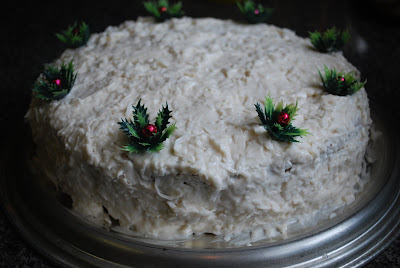 Another cookbook recipe, this cake features two layers of yellow vegan cake topped with a sweet sour cream/coconut frosting. I'm still working on perfecting the cake recipe, but it's getting better. My Granny makes this cake with a yellow cake mix, but I'm trying to develop a perfect vegan yellow cake that mimics the fluffiness of a boxed cake.

If you haven't already signed up for the Kenzoil giveaway, head over to yesterday's post and do it now. The contest is open until 10 a.m. CST.
Posted by Bianca at 12:00 AM

I love the sound of that chili, totally hearty and warming, perfect for this time of year. And that cake is a show stopper for sure, I want to come to your house for dinner!

That chili looks amazing! My bean hating son would even eat that.

Those holly sprigs are too cute! That cake looks like a snowdrift :)

I love chili! Though I have never put mushrooms in it.. That is something I can't wait to try! Oh and the cake... Oh my! That looks amazing! I just love coconut- and it's so cute with the holly! WE just can't wait for your cookbook!!

Oh man, coconut is my weakness! Sometimes I crave it even more than chocolate.

That's definitely the case with your cake. Give me that over chocolate any day!

That coconut cake is so pretty. Perfect for the holidays.

How beautiful that cake is!

Your chili looks fantastic! I wish I had some now =)

that is such a pretty cake!

Oh man, what awesome looking solstice eats! That cake looks like on my grandmother used to make too. Can't wait to see the cookbook version!

sweet gloriousness, Bianca - your coconut icebox cake looks divine! mmmmmmmmmmmm! and might i also add that your chipotle chickpea chili = the best! dan and i tested it out a while ago for a football day with friends and it went over so well - everyone absolutely loved it!

Broccoli with rice and cheese used to be one of my favorite non-vegan dishes, too! My family refers to me as the 'broccoli monster' since I crave it right up there with chocolate. I cannot wait to try your version. It looks delicious!

YUM!!! Could I possibly borrow the broccoli casserole recipe for Christmas dinner?? That sounds really good to me! Love you and see you soon!