I used to LOVE broccoli, rice, and cheese casserole — a potluck standard in the South (and probably everywhere in the U.S.). My mom made an awesome version using cream of mushroom soup mixed with rice, broccoli, and cheddar. I knew I must include a vegan version of this in my cookbook, so a while back, I developed this Broccoli, Rice, & Cheeze Casserole: 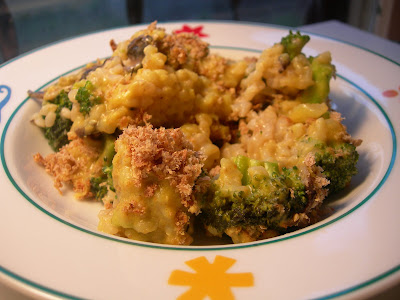 I made it again this week to test the recipe, but this is an old picture. I couldn't get a good shot this time, so I'm recycling this old one. I include my own recipe for vegan cream of mushroom soup in the cookbook since I don't know of a vegan version sold in stores. It works well in this recipe and several others in my book or it makes for a delicious creamy soup on its own.

On the side, I made the Italian Tofu from the Veganomicon: 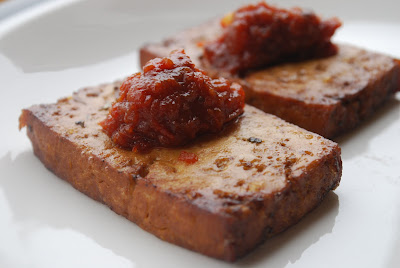 Tofu is marinated in a simple concoction of balsamic vinegar, olive oil, garlic, and herbs and then it's baked for about 30 minutes. I actually marinated mine for two days because I ended up joining some friends for dinner on the night I'd planned to prepare it.

Atop the tofu is a bit of local Tomato Marmalade: 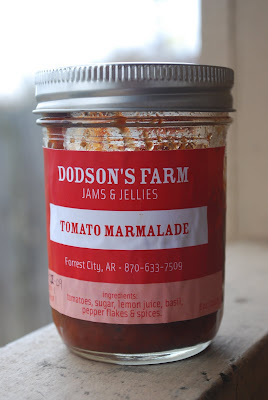 I purchased a jar from the Dodson Farms booth at the special one-day winter farmer's market downtown a few weeks ago. Made from tomatoes, sugar, basil, and other spices, it's a wonderful way to enjoy fresh summer tomatoes in late fall/early winter.

A couple of announcements:
* Don't forget to enter the Kenzoil giveaway on Tuesday's post! Contest ends Friday (12/18) at 10 a.m. CST.

* The awesome Gena of Choosing Raw is co-hosting an anti-fad cleanse in January. The Spark! Wellness and Choosing Raw cleanse offers three reasonable (and nourishing) ten-day dietary programs to help instill improved eating habits in 2010. For more info and the lowdown on signing up, check it out here.
Posted by Bianca at 11:07 PM

You need to get that cookbook out stat so we can start eating this stuff!!!!!

yum that looks seriously good. i haven't made that tofu yet but it sounds awesome.

Ooooh that casserole does look fabulous. Cheese and broccoli really is a delicious combination, can't wait for your recipe.

I love casseroles; always have...I pity all those poor fools who have an aversion to all the different, wonderful, tasty, mingling flavors & textures of these feats of orgasmic gastronomique pleasures!

That casserole looks so good! My mom veganizes hers every year at Thanksgving for me :)

Bianca what an awesome meal. That looks fantastic....DELICIOSO!

We have some friends from Louisiana that make a casserole using rice and cheese. This looks
really good! Can't wait for the recipe.

that reminds me that i still need to test out your broccoli, rice, & cheeze casserole, Bianca! it looks comforting, fo 'sho! i can't believe i still haven't tried the italian 'fu from v'con yet - i must, i must! tomato marmalade sounds super stellar, and i saw that anti-fad cleanse Gena was helping out with. it looks pretty sweet. i need to cleanse again, fo 'sho! perhaps i'll ACT again in a few weeks here to rid myself of all the holiday yummies. :)

I've been having that book on my list for a long time now. Maybe I should gift myself that :D after seeing that Italian Tofu!

That casserole looks amazing! Definitely looking forward to the cookbook...

By the way, Imagine Foods makes a vegan cream of portobello. Not *exactly* the same as the gooey Campbell's style cream soups, but with a little arrowroot in the mix, it's pretty dang close.

When is the cookbook coming out?!

Wow that tofu looks amazing. I admire you for keeping up your vegan lifestyle in what is probably a not very vegan-friendly town! Hope you have a great Sunday :)

Wow that tofu looks amazing. I admire you for keeping up your vegan lifestyle in what is probably a not very vegan-friendly town! Hope you have a great Sunday :)

the broccoli cheese dish looks great. I love the italian tofu too, I'm assuming you used extra firm tofu? I always love all your dishes.