A few weeks ago, I was contacted by the makers of Kenzoil, a salad dressing/dip/marinade made from cold-pressed extra virgin olive oil, fresh basil, and fresh garlic, about reviewing their product. The bottle arrived last week and I've been putting it on EVERYTHING ever since.

I have to admit, I did think the name was a little strange at first. It sounds more like something you'd put in your car than on your salad. But after reading a little history on the product's website, I learned that Kenzoil was created by a guy named Ken from Ann Arbor, Michigan. He was looking to create a salad dressing with no sugar or vinegar for a food combining diet he was following. The result was "Ken's Oil," later changed to Kenzoil. The oil was a hit with Ken's friends and eventually at the Ann Arbor Farmer's Market. Now it's a hit with me too!

When I first tasted the oil, I immediately thought it'd make a great bread-dipping oil. It's super-garlicky, which was the perfect accent for this slice of whole wheat beer bread: 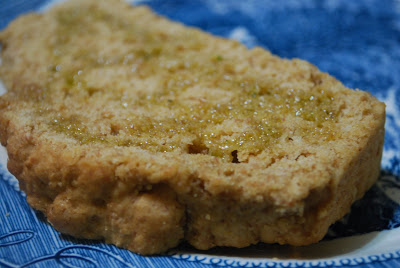 And it was delicious tossed with some cubed red potatoes and baked at 450 degrees for about 30 minutes: 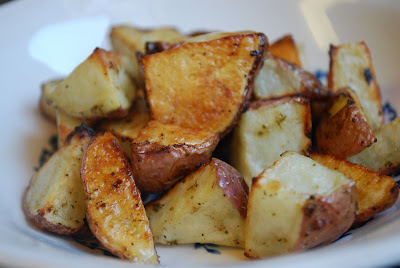 But my favorite use of Kenzoil was mixed with balsamic vinegar and tossed with a side salad: 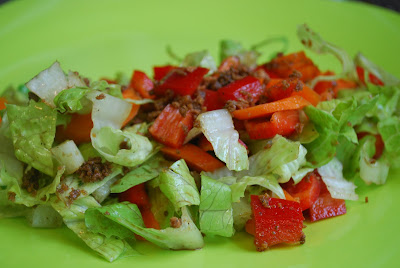 The Kenzoil took my ordinary side salad — romaine, carrots, red bell pepper, and vegan bacon bits — up so many notches.

Right now, Kenzoil is only available in Whole Foods stores in Michigan, Indiana, Illinois, Wisconsin, Minnesota, Missouri and Nebraska. But thankfully, the product is also available by mail order through Kenzoil's website.
Posted by Bianca at 11:07 PM

YUM! This looks delicious. You know how much I adore garlic so this would be going on EVERYTHING! Mmmm...a perfect dip for fresh, crusty bread, and tossed over potatoes set for roasting....heaven! Great review, Bianca.

Well, ...change one letter and you'd be getting an oil change! I've never heard of it, but Kenzoil sounds very promising. Garlic & Basil are two of my favorite items, and I do like to dip bread in savory oils. Thanks!

I definitely am going to order some of this. Thanks for the info.

That stuff sounds yummy! I could find so many good uses for that. I'll have to order some online. Thanks for sharing!

that's too funny, Bianca - i was thinking the same thing with the name Kenziol. ah ha ha! it looks awesome and the flavor sounds wonderful! when it gets to richmond i'll totally give it a whirl. thanks for the review!

Oh yum. If it's garlicky, it sounds like something I would LOVE!

We live in Ann Arbor, and we have been addicted to kenzoil for years.
ken and his business partner Ben are so wonderful and hand out samples while chatting people up at the farmers market

Wow, that sounds AMAZING. I agree, it would be great for bread-dipping!

That oil looks good! I'm into food combining myself, so it's great to hear about others, like that Ken fellow, who feel the same! Thanks for sharing!

[b]Anonymous surfing[/b]
Using our service you'll be fully anonymous in the Internet. Hide your IP address, and nobody will know that strange visitor from Germany ( Great Britain, Estonia and so ), is you.

[b]Traffic protection[/b]
Don't worry, from this moment all you data will be protected using 256 bit Blowfish encryption algorithm. Nobody can access your internet data.

[b]Wide variety of countries[/b]
You can choose one of over twenty high speed servers located in different parts of the world, from South America coast to islands in Indian Ocean.

I loved your blog. Thank you.

I found this at a farmer's market in MI about 5 yrs ago. It was absolutely delicious! I didn't get a giant bottle so, since it is so packed full of herbs and spices, I cut it with some more olive oil to help extend its life. The flavor just got better everytime I went to use it!