Classic Southern-style biscuits and gravy isn't supposed to be good for you. But while my version isn't exactly health food, it's way better for you than something you'd be served in a typical diner down here. Here's my Whole Wheat Butter-Soymilk Biscuits with Sausage-Sage Gravy: 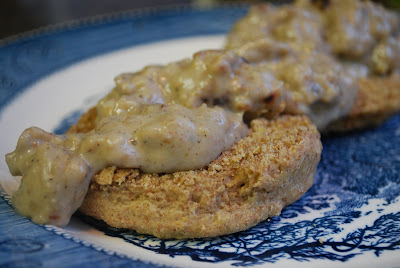 The biscuits (and the gravy recipe) are going in my cookbook. I've been perfecting these biscuits for quite some time, and I think I've finally mastered a fluffy whole wheat biscuit. Of course, they do contain a little soy margarine and non-hydrogenated veggie shortening, because you can't make fluffy, soft biscuits without those things. But at least I'm using the trans fat-free stuff.

As for the sausage-sage gravy, you'd never believe it's actually low-fat! Most gravies contain a mixture of fat, flour, and liquid (like milk or broth). But my gravy has no oil, grease, or butter. The only fat comes from a small amount present in the soymilk and vegan sausage. I use Gimme Lean (it's extremely low in fat and calories), which is mighty tasty mixed with gravy and served atop a split whole wheat biscuit for breakfast!
Posted by Bianca at 11:38 PM

Mmm, I remember those! one of my fav tester recipes!

Ooooh it is breakfast time here and THIS is what I want! Glorious glorious biscuits and gravy, one of my favorite things ever. YUMMMY! Thanks for this healthier version, Bianca.

Gimme Lean is the best, I bet its a great base for a gravy. Looks like a southern dream come true...

Super yum as always. Get that cookbook out, would ya!?

Oh, and the zucchini dipping sauce from my post was just plain old vegan mayo. Love that stuff! It’s weird, because I never liked real mayo

That looks yummy Bianca. What a treat.

I'm salivating at the thought of a fluffy biscuit that's also whole wheat!

This is just what the breakfast fairy ordered - it's perfect with the fluffiness of the biscuits and the flavor of the gravy as you describe it - anything that's not uber-fatty but still tastes like it is, is a keeper in my book!
I know you get asked this ALL the time, but, do you have an approximate kinda-sorta publishing date for the cookbook?

hey bianca,
i had some catching up to do with blog reading. i love those biscuits and gravy. i'm just now starting to be able to complete short stints in the kitchen, so perhaps i'll make some gravy this weekend.

That is wonderful, all around! I can't get a good whole wheat biscuit- mine stay really dense and grainy. My gravy with whole wheat flour stays grainy too...I can't wait to try your recipes! This ETL plan has me craving bread like nobody's business!

I can't wait to see the recipe in the book! We made vegan "chicken" and biscuits last week, but I don't think they were healthy. At all.

That looks delicious and I bet I could even get my husband to try it!

I already couldn't wait for your cookbook to come out and now you've totally sold me. My southern hubby has tried and tried to make whole wheat biscuits his family would eat and it looks like your version will fit the bill.

Oh my god. YUMMMMMMMM! I want to eat this right now. Hey, can you send me the tester site invite again? It didn't work the last time for some reason.

I can't WAIT to get my hands on your cookbook!

That really looks fattening to me. But in a good way.

Yum. Biscuits & Gravy is the best.

i've gotta say, Bianca - your biscuits are the absolute best! when we tested them a while ago (back before i was gluten-free) dan loved them so much that he requested them for thanksgiving this year. i was sad that i couldn't enjoy them - but he sure did, and so did his family!