A few months ago, I discovered Pig Out brand's mushroom bacon at Sprouts. It was in the chip aisle, and while the dried, smoky mushroom snack could definitely be eaten as a chip, I enjoyed it sprinkled on salads and BLTs. I've purchased several bags of that bacon since! And then at the start of quarantine, my friend Nicole sent me a link for a special offer of four free sample bags of Pig Out Pigless Pork Rinds! All you had to do was pay $5 shipping. Sign me up! I already knew they'd be great after my experience with the mushroom bacon. 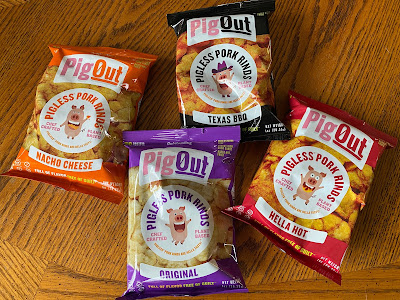 The snack-sized bags arrived on my porch a few days later, and I dug right in. They come in four flavors  — Original, Texas BBQ, Hella Hot, and Nacho Cheese.

These pigless rinds are made with rice, pea protein, pea grits, oil, and seasonings. They're basically a puffed rice snack seasoned like pork rinds. They're baked, not fried, and while they're not really a healthy snack, they're certainly better for you than pork rinds made from pigs!

I stopped eating meat (and thus, pork rinds) in 1994 at age 14, but before that, I was a huge pork rind fan (that's when I was too young to understand what a pork rind was!!). BBQ were always the best, so I opened the Texas BBQ flavor first. 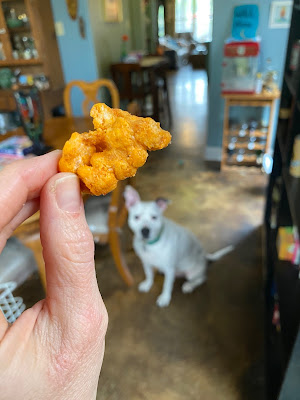 One bite was I was in love! These are so good, and they really do have the taste and texture of a traditional pork rind. But they're not made out of the skin of pigs, which is cruel and disgusting. There really is a vegan version of everything now!!

I haven't opened the Original or Hella Hot yet, but I really enjoyed the Nacho Cheese flavor too. I don't think I've seen a nacho pork rind, but why not? They get their cheesy flavor from yeast extract, tomato powder, and spices. Yum!!
Posted by Bianca at 8:30 PM