After a two-week break from takeout while self-isolating, I was sooooo ready to eat at Imagine Vegan Cafe again! I've been trying to eat there weekly during the pandemic to show my support for Memphis' only full-service vegan restaurant. I thought I'd get takeout from there over the weekend, but Paul is on a health kick (yay!) so we cooked at home. But he went back to Nashville for work on Sunday night, so Monday was junk food party time! After work, I called Imagine for a takeout order of Spinach Artichoke Dip & Chips! 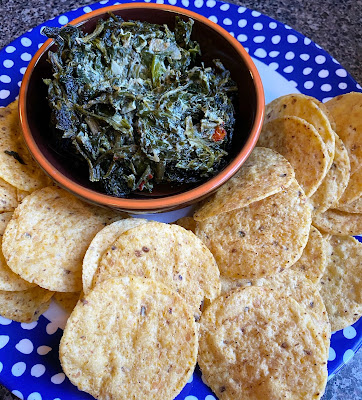 Imagine has the BEST spinach dip, and I usually just snack on this as an appetizer (shared with others). But in quarantine times, there is no sharing. So I ate the whole thing as my dinner.

Last night, I made a yummy Mandarin Orange Chick'n Stir-fry with Trader Joe's frozen chicken-less mandarin orange morsels, fresh cabbage (that had been in my fridge for a month, maybe more!), zucchini, and mushrooms. Served over brown rice. This was my first time trying the TJ's morsels, and they're really good. Very similar to the Gardein mandarin chicken. 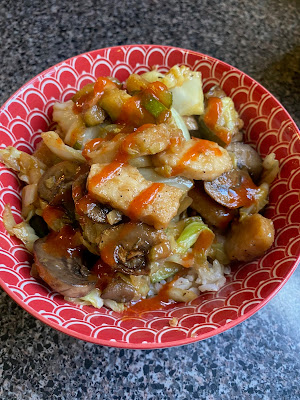 I'm still doing 14:10 intermittent fasting most days, which has resulted in a serious sparkling water addiction. I was already a big fan of fizzy water, but now that I don't eat anything after 6 pm, I depend on my nightly La Croix to keep me entertained. I just like to consume things all the time! I found this new Limoncello La Croix this week, and WOW!!!!! It has a certain razzle dazzle that I cannot explain, but it's very similar to the Key Lime flavor (my fave before I discovered limoncello). I have some homemade limoncello liqueur that I made awhile back, and I'm gonna try spiking my water for a refreshing cocktail! Homemade White Claw! 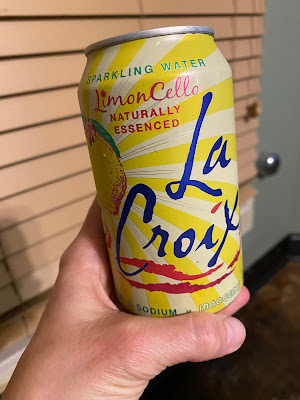 Speaking of snacks (is water a snack?), I really enjoyed this blueberry IQ protein bar! This came in a Vegan Cuts box, and I had it after a morning virtual workout class. My gym has been killin' it during the pandemic with super-hard virtual classes, and I'm taking three classes a week. I like to have a protein-y snack afterward, and this was nice. It's made with whole foods and was only lightly sweetened. 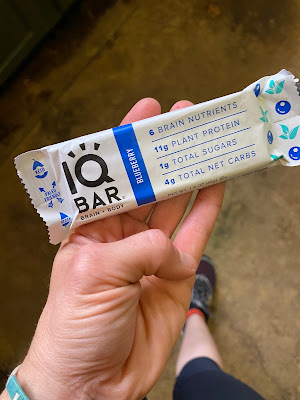 Finally, here's my breakfast from this morning! My mom gave me a leftover container of Vanilla Silk Almond Yogurt that she bought for our lemon pie the other day (but didn't use). I enjoyed the yogurt with some Love Crunch chocolate berry granola, fresh strawberries, ground flax, and walnuts. I love the Love Crunch granola because it has chunks of dark chocolate mixed in. 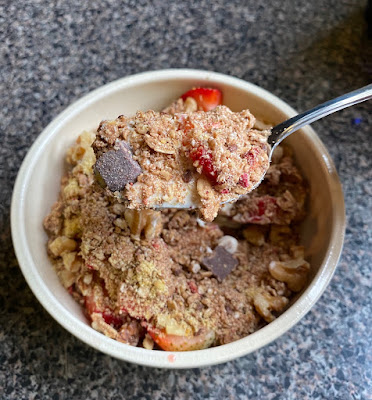 I love an appetizer for dinner!! That spinach artichoke dip looks so good, I'm Googling recipes right now!!!
The limoncello La croix is my new favorite!! I totally agree with you, this and the key lime are just a little bit better than the other flavors!!

I seem to remember the Trader Joe's orange chicken as overwhelming with the sauce. But, I didn't add veggies, I wonder if that helps balance things?

I love sparkling water! Where did you find Limoncello in Memphis? Thank you for your time!