My partner Paul recently discovered he has high blood pressure, and that was enough to scare him straight. At least for now! I told him he could lower his blood pressure and improve his overall health with a plant-based diet. Paul eats vegan food sometimes, but he's not vegan most of the time. I haven't convinced him to go fully vegan (YET!), but last weekend, I did get him to commit to eating super healthy meals from the Engine 2 Seven Day Rescue Diet.

The Seven Day Rescue is Engine 2's super-strict, oil-free, low-salt, whole foods-based meal plan. I've done the plan myself years ago as a reset, and it's hardcore. I had him pick out a couple recipes for the weekend. He chose (no surprise!) the Mighty Green Pasta Bowl, which has whole wheat spaghetti, homemade oil-free red sauce, and lots of greens. Paul doesn't typically eat kale or spinach, but both were mixed into the pasta. And he ate them! We also sauteed some mushrooms without oil, and I added nooch to mine. I made cashew parsley ranch for our salads. 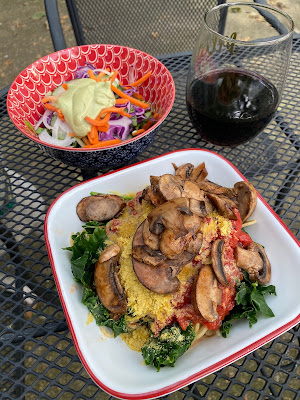 The fact that Paul ate a salad was nothing short of a miracle. He does eat "salad" in real life, but it consists of iceberg lettuce with a lot of shredded cheese and ham, and it's always drowning in dairy ranch. But he ate his veggie salad with cashew ranch, and I was proud.

The next day, he chose the Triple Pepper Chipotle Chili, which we had with brown rice and avocado. The chili has kidney and black beans, lots of bell pepper, chipotle pepper, mushrooms, and even zucchini! It's sweetened with a little BBQ sauce, which is different, but we liked it! 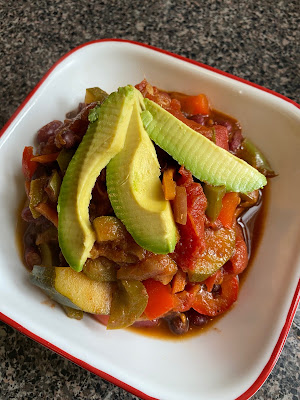 He'd also picked out the Hummus & Avocado Flats for a Sunday lunch, but we ended up snacking on oil-popped popcorn (not Engine 2 approved) for lunch (because we were binge-watching You on Netflix). So the next day, I had the flats (open-faced sandwiches) for lunch on my own. These have hummus, avocado, cucumber, tomato, balsamic, and romaine on sprouted grain bread. I made some corn chips in the air fryer with corn tortillas and enjoyed with some homemade salsa (from my dad!). 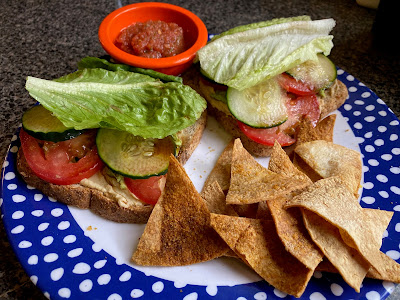 And finally, here's last night's leftovers. I had some red sauce left from our spaghetti night, so I had more pasta. But I added broccoli (instead of kale) and topped with chickpeas and nooch! 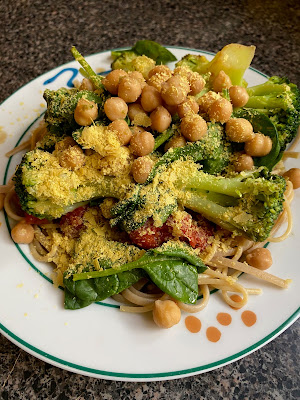 At the end of the weekend, Paul's blood pressure was back to a normal rate! All it took was cutting down on salt (he consumes WAY too much) and eating a healthy vegan diet. Since then, he's had fish a few times, but he's stuck to a mostly vegetarian diet so far.
Posted by Bianca at 9:00 PM

Go Paul!! All the meals look amazing, and how cool that after one weekend his blood pressure is back to normal!!!