There's a new vegan-friendly restaurant in Crosstown! After months of construction, The Doghouzz is finally open! This new gourmet hot dog bar is just across the street from Crosstown Concourse in the old Metro nightclub building.

Metro was a gay bar back in the early- to mid-2000s, and we used to hang out there. So it's cool to see something fun happening in this spot again. The inside looks similar, only they've taken down the wall that used to separate the bar from the dance floor. The back patio, where we usually hung out, looks the same!

The Doghouzz serves a Vegan Braised Carrot Dog, and it can be customized in all kinds of ways. I went in for lunch today and ordered the carrot dog on a poppyseed bun with added mustard, avocado slices, and raw onions. The braised carrot was just the right texture — soft but still firm enough to be toothsome — and it was massive. So big that it barely fit into the bun! 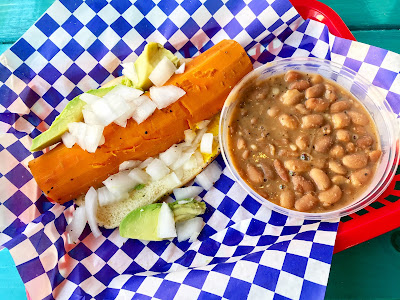 It's cool to see a carrot dog offered rather than a plant meat dog since that's available elsewhere in Memphis. Plus, I feel better sticking with whole foods, like carrots, as much as possible.

Vegan sides include pinto beans or chips. I went with the beans and they were mind-blowingly good! Owner Steve says they're prepared with his secret recipe.

The Doghouzz is currently only open for lunch until they get their beer license and liquor license, but they'll eventually be open til 3 am!

Since the place is named The Doghouzz, there are plenty of dog-themed touches, including these adorable bathroom signs. 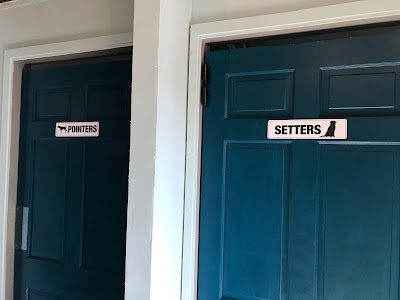 The Doghouzz is located at 1349 Autumn Avenue.
Posted by Bianca at 9:00 PM

It's amazing how much they got the carrot dog to look like a plant meat hot dog! If done right I think carrot hot dogs are great, especially with all the toppings!!