I usually blog about vegan food, but lately, I've been throwing in some CBD product reviews too. Because CBD products are awesome (and if they're also vegan, they're fair game for reviews). Daddy Burt Hemp Co. shipped me some of their hemp extract oil. 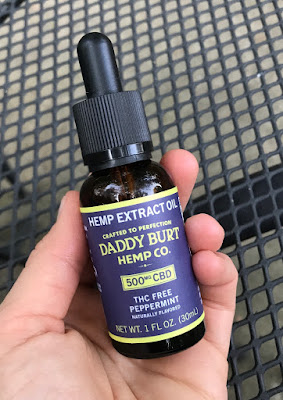 This stuff contains 16 mg of THC-free CBD per serving, and it's peppermint flavored! It's made with Kentucky-grown hemp. I've been experimenting with CBD products to help me stay asleep. I can fall asleep with no problems, but I tend to wake up several times throughout the night (and sometimes struggle to fall back asleep).

I've been taking a dropper-full of this after work in the evenings, and I'm happy to report that I'm sleeping better. I've gone from averaging about 45 minutes of deep sleep to getting closer to an hour and a half (according to my Garmin sleep score). Now to be fair, I think some of that may also be due to me trying to get in bed earlier so I'm sleeping longer overall.

CBD is also supposed to help with anxiety, and though I don't experience anxiety often, I sometimes have situational anxiety. And today was one of those days.

I took some of this stuff today after being released from jury duty. I have a lot of anxiety around being responsible for determining someone else's guilt or innocence. Like a lot. And I was a bundle of nerves all day while I waited to be called. When they finally called me, it was for a murder trial. ANXIETY CITY. As the judge and lawyers were questioning me, I was a nervous wreck. I'm sure they could tell, and they dismissed me. Whew.

Though I was relieved, I was still so wound up when I got home. I took a dropper of this CBD oil, and it definitely helped me calm down. There's no high or head change. It's THC-free, but there's a sort of calm that washes over you after you take it. It's subtle, but when you're all wound up, it's noticeable.

The Daddy Burt oil has a nice minty flavor that doubles as a breath mint. And it works! Daddy Burt also sells CBD gummies (and they're vegan too!).
Posted by Bianca at 5:38 PM

Yikes, that sounds stressful. I wouldn't want to be responsible for that either, so glad you were dismissed.
I have been curious about CBD oil. You can't get it in Australia, but I recently found a place that will send it and apparently it gets through customs OK. I have a lot of pain, and a lot of anxiety, so I do wonder if it would be helpful for me.