This past Sunday, Paul arranged a kayaking trip down the Harpeth River, right outside Nashville. I made the drive over to Nashville Saturday morning with plans to stay the night Saturday and Sunday. And I got there JUST IN TIME for the BE-Hive Summer Cookout pop-up. This all-vegan fest featured food multiple food vendors, including the host BE-Hive (a vegan butcher shop).

But the fest started at 11 am, and I didn't make it in from my three-hour drive from Memphis until almost 2 pm. So all the vendors were sold out except for BE-Hive. Lucky for me, that's where I was planning to eat anyway since I saw on IG that they were having Nashville Hot Chik'n Corn Dogs (omg) and Chili Cheese Fries. 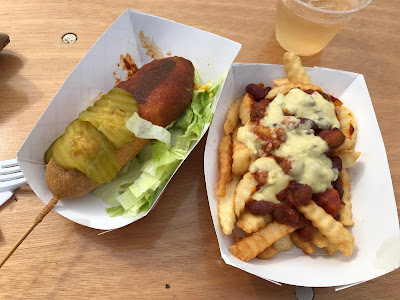 Y'ALL. This deep-fried hot chicken seitan on a stick was FIRE. I savored every bite. And the chili cheese fries (made with a homemade cheese sauce) were top-notch. Washed down with a vodka strawberry cocktail. Everything was so good that I didn't even mind that I had to stand in this line for an hour to get food. Shout-out to BE-Hive though for SUPER-fast food delivery once the orders were made! I had my food less than five minutes after ordering! 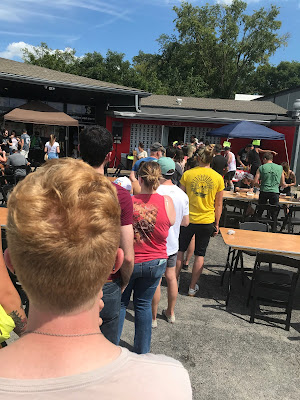 On Sunday, Paul and I met up with his sister Sheila, her daughter Samantha, and our friend Kevin (who drove over from Memphis) for an 8-mile float down the Harpeth. This was waaaay easier than our last canoe trip down the Wolf River in Memphis because 1) kayaks are BETTER and 2) the Harpeth is a wider river with less swamp and more banks for stopping to rest. 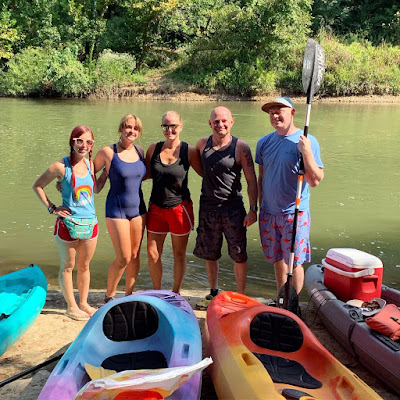 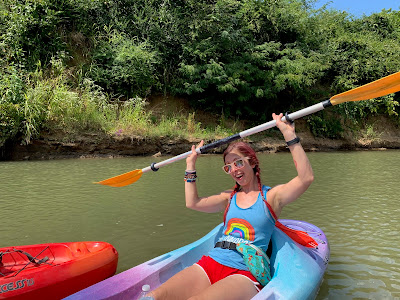 I snacked all day on the river (PB&J, Clif Bar, NOKA Superfood Pouch, vegetable chips, pickled carrots), but I was still famished by the end of the trip. I'd planned to eat some food I'd stashed back at Paul's parents' house afterward, but on the drive back, we passed Tailgate Brewery.

We decided to spontaneously stop in for a beer. When we entered the brewery, I noticed a pizza menu. And then I saw the words "vegan" and "Beyond sausage"! They had a Meatless Sausage Pizza (which could be ordered with vegan cheese!!!). This really hit the spot. Washed down with a Hazy IPA! This pizza was EXCELLENT. Paul tried a bite, and he said it was the best vegan pizza he's ever tried (and he's not typically a fan of vegan cheese). 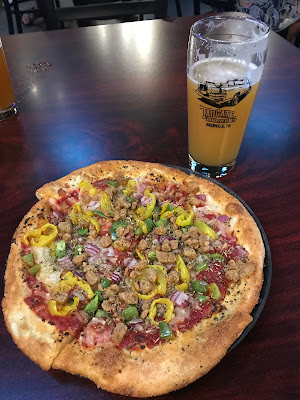 By the way, I'm still doing my 80/20 Plants plan! Last week (including this past weekend), the focus was on breakfast. So even though I indulged in crazy lunches and dinners, I made sure to have oats with berries for my breakfasts. This week is snack week, and I'll be checking in about that later this week.
Posted by Bianca at 1:29 PM

I am so glad that you got there in time for the B Hive food, sounds like it was worth it. And what a lovely surprise to find that pizza!