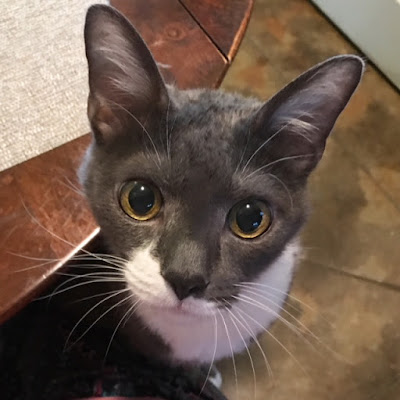 Akasha came into my life as a tiny kitten with giant ears and giant eyes. Just look at this little baby! He never quite grew into those ears and eyes, but he turned out to be a very handsome little man.

My ex and I adopted Akasha from a friend who'd gotten a kitten for her kid (but she didn't anticipate how much work went into caring for a kitten). We already had an amazing puppy — Datsun — so we figured we could handle a cat too. We brought Akasha home in September 2002, the night before I was scheduled to walk in the Memphis Peace Walk with Buddhist monk Thich Nhat Hanh. I'll never forget waking up super early on a Saturday morning for the walk, which I was covering for The Memphis Flyer, and coming home afterward, all zenned out, to my brand-new kitten.

Akasha and Datsun, who was only a couple months old at the time, got along great! They play -fought ALL THE TIME. 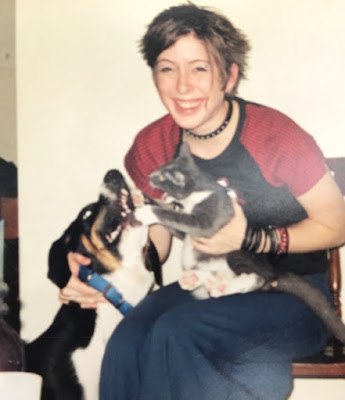 And they drank after each other. Y'all, this is probably dairy milk cause I was just vegetarian back in 2002-2003, not vegan. Look at Datsun waiting patiently in line. 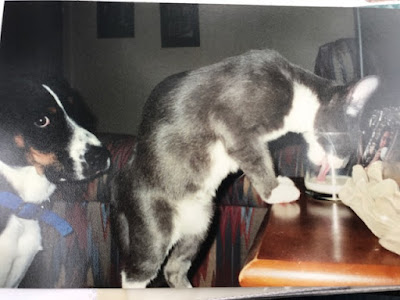 Eventually, we took in more cats. But Akasha was always number-one in my heart. Although I grew up with many, many cats over the years, he was the first cat that I was responsible for raising without the help of my parents (although they made great grandparents and helped greatly with cat-sitting over the years!).

We were convinced Akasha had a sixth sense. His eyes were always HUGE and staring off into space. He'd stare at a wall for long periods of time, and were certain he was seeing ghosts. 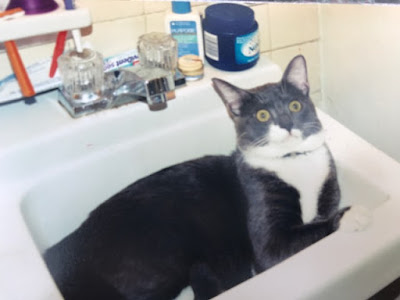 He loved hugs and being carried around like a baby. Nothing made him happier than dry food and head skritches. When you stopped petting him, he'd head butt you until you started back. When he was freaked out, he'd burrow under bed covers. He'd get under layers and layers of blankets, and you'd wonder if he could even breathe under there. 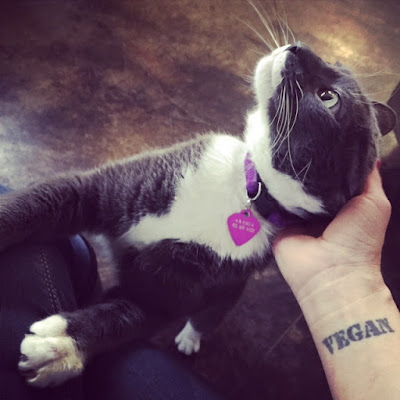 At some point a few years ago, Akasha was diagnosed with mega-colon, a condition that made it hard for him to poop. He was prescribed two medicines twice a day, plus Miralax on his special food. Every six months or so, he had to make a special trip to the vet for enemas. But despite his condition, he survived with mega-colon for 5-6 years after diagnosis. Sadly, his condition meant he could no longer eat dry food (his fave). But that didn't stop him from trying to steal any leftover dry stuff from the other cats' bowls or the dogs' bowls. He could still have dry treats sometimes, and he would devour them like he'd been starving for days. He was also a tomato thief, and if you left one sitting on the counter after slicing, he would sneak off with it. 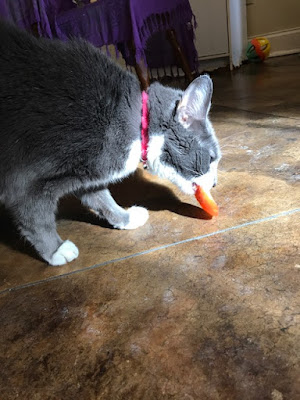 Anyway, he was the best. I had six cats, and I'm not gonna lie — Akasha was the favorite, hands down. His older brother Datsun passed away two years ago on June 2. Akasha left this world on May 29. It's crazy how close together their death dates are. 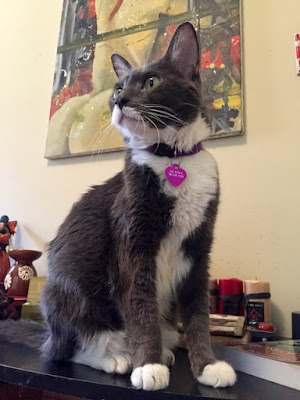 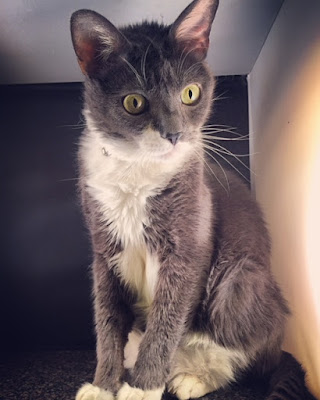 I came home from work one day in March and noticed that Akasha wasn't running to his food bowl at dinner time like he usually did. I picked him up to take him to his bowl, since his special diet required him to eat in a separate room from the other cats. But he cried when I lifted him, and when I sat him down, he started limping and favoring his right hind leg. And then he refused to eat. I rushed him to the vet, and they did X-Rays. Turns out he'd lost all bone mass in his right leg, which the vet told me was most likely a rare bone cancer. We didn't do a biopsy because it would have required putting him under anesthesia, and he was 16. The vet prescribed some steroids, and after a few days, he perked back up! 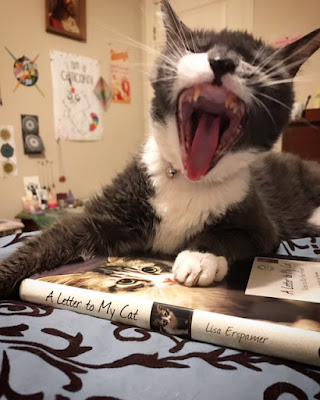 But I knew the steroids were just a band-aid and that his days were numbered. After a couple months of doing well (and even walking on his back leg!), this past weekend, Akasha stopped eating again. His back leg got super swollen. He couldn't walk without a really bad limp, and he seemed to be in a lot of pain. On Tuesday, I called the vet, and he came over for a house call to take Akasha to the Rainbow Bridge. It was the saddest thing, but we got to spend most of the day together Tuesday, watching Netflix on the couch. Sadly, Paul was working in Nashville and couldn't make it home in time. He's known Akasha since he was two years old, and it was hard for him too. We cried a lot on the phone together that night.

Akasha, you've left a massive hole in our hearts that can never be filled. But I'm so grateful for the years you gave us. Thanks for all the head butts and cuddles. We'll miss you, buddy. 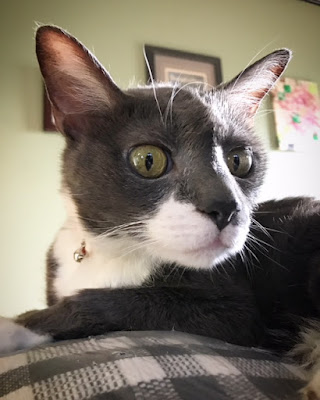 My heart is breaking for you..... it’s not easy to manage the loss of a loved family member. He sounds like such a really unique wonderful personality. I never knew another kitty that would head butt you! My parents kitty Piggy would do that- it was so funny/odd.
Beautiful post in his remembrance, he was so lucky to have such a wonderful mom :))
Ttrockwood

I'm so sorry, Bianca. That was a lovely tribute. Reminds me of my most special guy, Butchie. Even though he died many years ago (October 2000), I still cry like a baby when I think about the day we had to let him go. My condolences.

What an amazing and beautiful cat. I'm so sorry for your loss. From reading your beautiful tribute it seemed like he had a long, happy life with a loving mommy and beautiful fur siblings. Thank you so much for sharing him and his memory with us. Sending you so much love and lots of hugs.

I'm so very sorry for your loss. Akasha was a very handsome boy. What a wonderful eulogy and tribute to your little man.

I am so sorry! He was an adorable fantastic boy, and I'm glad you two had so many years together!!

I’m so sorry for your loss, he sounds like a wonderful floof xx

What a special little kitty. Sending lots of peaceful thoughts your way.

I’m so sorry for your loss, Bianca. Akasha seemed like a really special little dude with oodles of personality. I love the picture of him in the sink :) I hope the happy memories comfort you and Paul during this difficult time.

I am so so sorry. He was so incredibly gorgeous with those huge curious eyes! I'm sending you all so many hugs.

Bianca, I'm so sorry for your loss. He was such a beautiful kitty! He was so lucky to have you for a mama. Big hugs. xoxo

Oh Bianca .you know how well I understand this painful loss .It's so hard. I loved reading your lovitl tribute to Akasha. What an amazing thing it is to spend so many years of our lives with these special creatures. I'm sending love and hugs . Amey

I have tears in my eyes for you and the big loss in your family. What an incredible soul you were able to know and share your life with. Thinking of you, Paul, and Akasha with love and light. <3

I'm so sorry for your loss. Akasha sounds like he was such an amazing, special cat. I hope the memories of his many years with you bring you comfort as you go through this difficult time. Big hug from Texas.

Oh Akasha, what a sweet sweet cat. It looks as if he lived a wonderful life with you. I'm so sorry for your loss.

Sorry to hear about your loss. It sounds like Akasha was a wonderful soul.

I am so sorry. This was such a beautiful tribute to such a special cat. *lots of hugs*