Another weekend on Reclaim & Revolt has come and gone. And I'm feeling great! This is actually a 4-day weekend for me (sort of) because Friday turned out to be a SNOW DAY! Remember how I said in my last post that I'd believe it would snow if I saw it. Well, I saw it. And Maynard did too, but he didn't like it, so he closed his eyes! Ha! Maynard hates any kind of precipitation. 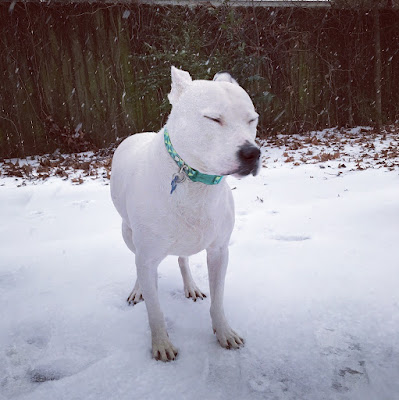 My work called a snow day, and even though I'm walking distance from the office, I opted to work from home and stay warm. We weren't supposed to do any work unless it was absolutely necessary, but I had some Friday deadlines, so I had to work for a few hours.

Before all of that though, I woke up at my usual 5 am, looked out the window and saw snow, and knew I'd be skipping my usual Friday morning bootcamp since the gym is about a 7-minute drive downtown. Instead, I opted to do the workout that Lacy sent us on Tuesday. The Reclaim & Revolt plan includes recipes, workouts, gut health tips, Tarot lessons, astrology lessons, and journaling prompts. After Lacy's workout — a leg-heavy set of lunges and squats — I had more of my Savory Breakfast Oats from earlier in the week.

For morning snack, I had a few roasted peanuts while I worked. And then I had the salad I'd so carefully packed into a jar the night before to take to work. It had smoked tofu, cashew ranch, brown rice, and veggies. 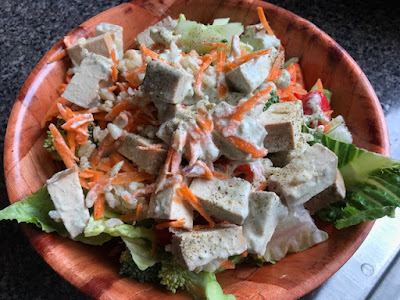 I was able to wrap up my work by 2:30 or so, so I used my free time to make Hannah's recipe for sauerkraut that was sent to us on Thursday. This should take about seven days to ferment, and I can't wait to try it! 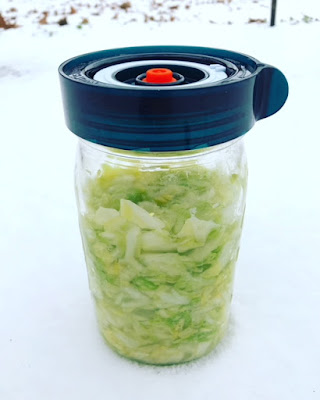 Paul got home from work early too, so we braved our way down the icy street to the Redbox and rented a couple of movies. I poured a glass of red wine and made Lacy's Socca Pizza with Cashew Cheese (from last year's Reset & Restore recipes). I used my leftover Slow Cooker Chunky Red Sauce from last week's spaghetti squash meal. This was so good! 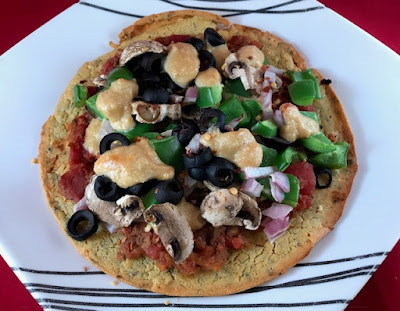 I was starting to get sleepy mid-way through our second movie, so I popped some popcorn in garlic-chili oil (another of Lacy's recipes! This one is from her e-book, The Super Anti-Inflammatory Kitchen). 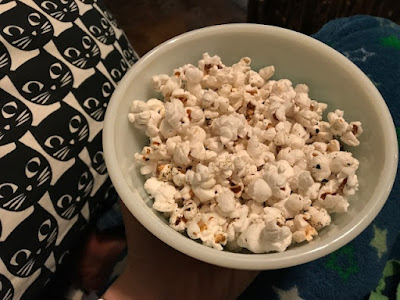 On Saturday morning, I slept in and then got up and made some Oats with Almond Butter & Blueberries, enjoyed in my PJs while catching on the The Sopranos. 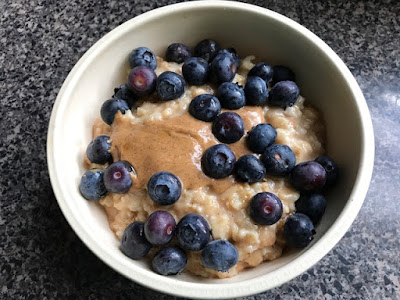 I had lots to do on Saturday — cleaning, meal planning, grocery shopping — but I had to nix the shopping part since it was still too icy out for me to drive. I have to be chauffeured around when it's icy! So I made another salad to snack on while I cleaned. I love eating while cleaning. It makes cleaning more fun. 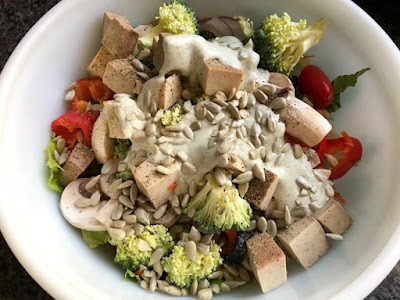 Dinner on Saturday night was more Socca Pizza, and then we made a pretty scary drive out east to celebrate my friend Shara's birthday at Billy Hardwick's All-Star Lanes bowling alley. The roads were clear in places and terrible in others, but we made it! While there, I had a couple beers. I know I said I was only drinking red wine during this reset, but hey, I changed my mind! I'm trying to be better about not restricting. It's more important that I focus on moderation, and two beers is a-okay. I thought I was done, but then our friend Mary came out with surprise vodka shots for every single person there. And it would be rude not to accept, right? ;-) Even still, I felt like I did a good job there. 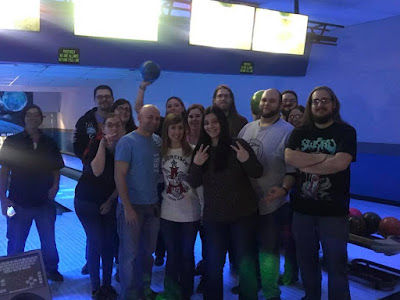 I was SUPPOSED to have my first trail race today! But sadly, it was canceled due to the icy condition of the trails in Overton Park. But when I awoke at 7 am, they hadn't made the call yet. So I had what I thought was a pre-race breakfast of Slow Cooker Apple Pie Porridge (another Lacy recipe). I put this porridge of apples, steel cut oats, dates, and maple in the slow cooker last night. It was sooooooo comforting and delicious. 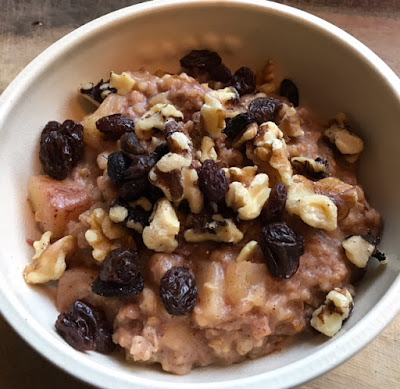 My race was supposed to be at 2 pm, and I didn't want to eat much fiber beforehand. Just carbs and protein, so my morning snack was Smoked Tofu Strips, enjoyed while reading Erin's Tarot lesson from this week. 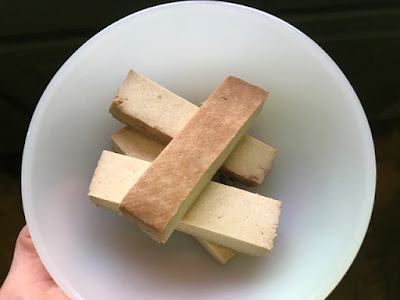 Around 11 am, they called the race off. But Paul and I had already planned to get more running in post-race, so we just extended our Sunday run to a 6-miler. We planned to go out at 2 pm since the race was canceled, so I had this lunch snack of Brown Rice Cakes & Nut Butter with Bee Free Honee about an hour before our run. 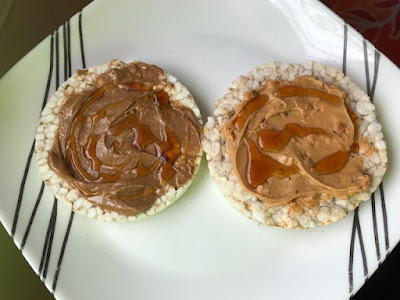 Then we headed out! Our neighborhood roads weren't too icy today, and some of the sidewalks were clear. We just made sure to walk the icy stretches and go slow. We even explored Overton Park, where my race was supposed to be. And, indeed, it was quite icy. 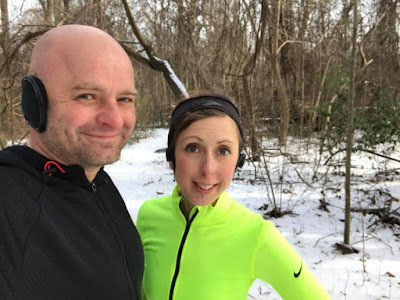 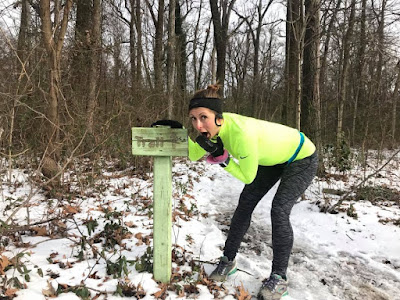 After our run, I had a No Cow Lemon Meringue Protein Bar. I am trying to limit processed foods in January, but I'm making an exception for protein powders and bars. These No Cow bars have rice and pea protein rather than something less wholesome, like a soy protein isolate. 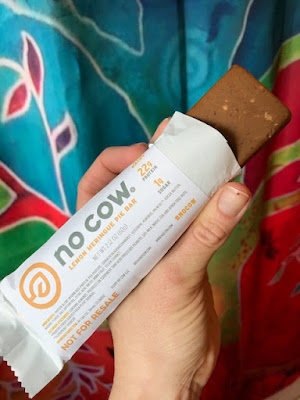 Dinner was Lacy's Vegan Kale Quiche, a recipe that she included on this year's Reclaim & Revolt and last year's Reset & Restore. I made this last year and loved it, so I knew I wanted to make it again. It has a silken tofu base, plus kale and red peppers. The crust is gluten-free and made with almond flour and almond butter (she called for tahini, but I was out and subbed almond butter instead). I had a slice with a side salad. It was so nice to have some veggies after a day of brown food! 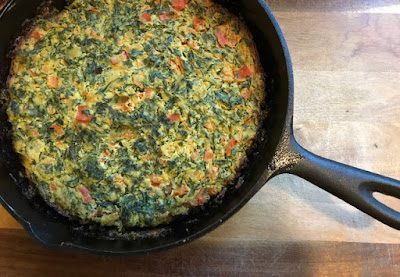 After dinner, we went to Ghost River Brewing Co. for a couple beers and Connect 4. I kept it light with a Bloody Beer (Grindhouse Cream Ale mixed with Nikki's Hot Ass Bloody Mary Mix). 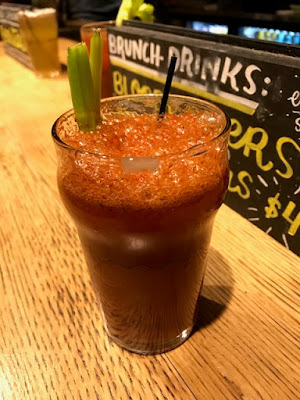 And a Beermosa (gose sour ale mixed with OJ). Each of these probably only had 8 ounces of beer and 2 ounces of mix. 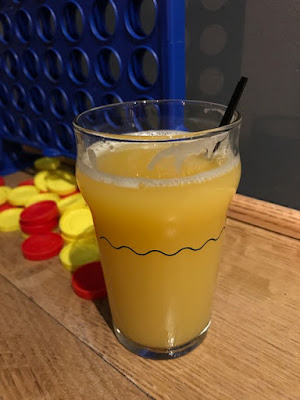 I'm off tomorrow for MLK Day! So I expect I'll be sleeping in again. Yay!
Posted by Bianca at 5:43 PM

I absolutely adore that picture of Maynard! I feel like he speaks for all of us!!
I need to try a socca crust pizza, what an amazing idea!!!

I love seeing animals react to snow. I remember one morning when I had my pet minature poodle Madison, we would get her all excited about going out to pee and stretch her legs. She was jumping and barking, and swung the door open and she ran.... but only got her front feet out the door... in the snow And just stopped She was clearly trying to figure out if she should walk around or just pee and GTF back in. lol

Just wondering, why are you doing some protein powders but not soy? Is it that soy protein isolete just taking more steps to process compared to something like pea protein? Just wondering.

I’m glad you’re extra cautious about driving in snow or ice, that is really scary stuff! Unfortunately nyc gets a lot of snow (more on the way tonight) and working from home is so appealing. But as long as the subway is running we have to go to the office, ugh.
Please update us on the sauerkraut! If it ferments at room temp you might need a few extra days in the winter, my kombucha is taking much longer than it does in warmer weather.
Ttrockwood