Another Halloween has come and gone! It's definitely my favorite holiday. Mostly because I love dressing up but also because Halloween is also Samhain, the night when the veil between the worlds of the living and the dead is at its thinnest. It's a fantastic day to hold a little ritual honoring your friends and family members who have passed. I also love Halloween because it means squirrels in witch hats! 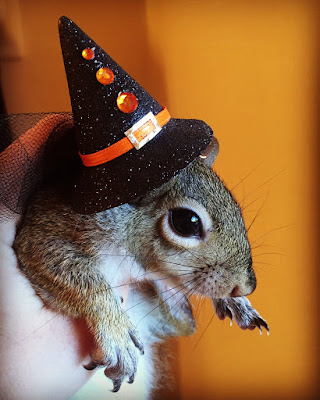 I know, I know. You can't even stand it, right? I can't believe I got Mabel to hold still long enough to pose for this adorable pic. But more on Mabel in a few. Here's what I ate yesterday.

For lunch, I stopped by Imagine Vegan Cafe and picked up a Messy Dog (hot dog with vegan cheese sauce, chili, kraut, vegan mayo, jalapeno, & relish). I always eat a hot dog on Halloween because my Me-Maw usually throws a Halloween party (with chili dogs). This year, she couldn't have a party because she just had hip surgery, but I can't let go of tradition. 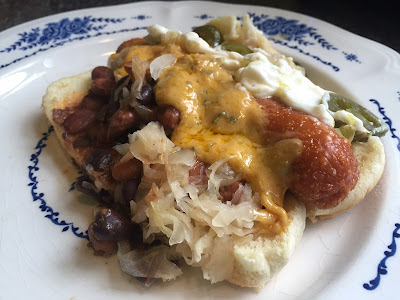 For dinner on Samhain night, I always have a little Feast of the Dead. I set out photos and tokens at the dinner table representing everyone I know who has passed. Then, I light a candle for each person, and then we eat together — just me and the spirits. It's quite lovely. I usually make this awesome seitan & plantain stew from Bryant Terry's Grub cookbook. But this year, I mixed things up by making another of my favorite fall recipes —Punk-kin Pasta from La Dolce Vegan. This is whole wheat pasta with pumpkin puree, vegan burger crumbles, and sauteed onions, and it's topped with vegan cheddar. Had a slice of garlic toast with Viana Onion Butter on the side. 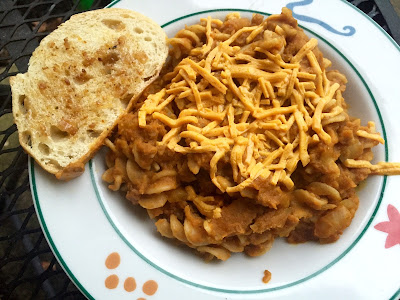 I also made a salad with yummy J&D's Bacon Croutons (yes, they're vegan!) and Wayfare Bacony Bits — both treats that my dad ordered me recently from Vegan Essentials! 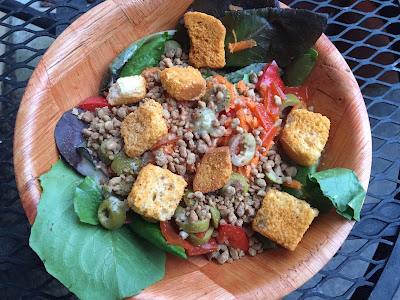 For dessert, I picked up a Pumpkin Cupcake with Cinnamon Buttercream from Pink Diva Cupcakery! 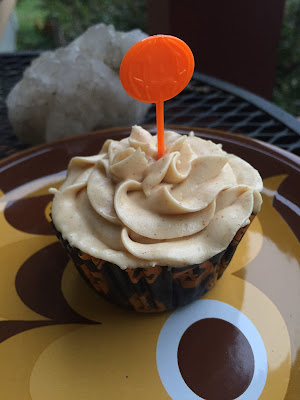 Now I promised more Mabel, so here ya go! Today was Mabel's first unsupervised outdoors adventure. Our rescued baby squirrel is 12 weeks old now, so she's ready for release. I opened the window today and let her explore outside on her own. She didn't get far before coming back inside to the nest she's created with toilet paper on top of the toilet! But she did spend some time climbing some boards we propped against the house for her. 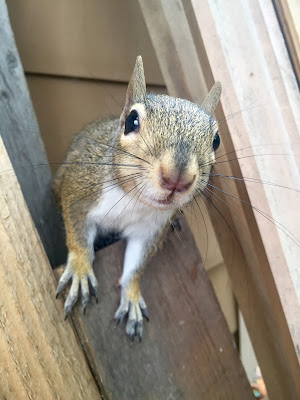 She's free now to come and go as she pleases. But it's been our experience with Herman, our last rescued squirrel, that newly released babies like to stay inside at night for a few more weeks until they can make their own nests. And as long as she wants to stay inside, we'll let her! And of course, we'll provide food all winter since she hasn't had time to gather her own nuts. Gonna miss having her running around the bathroom all the time though!
Posted by Bianca at 10:04 PM

Mabel gets cuter and cuter! She's so lucky that you rescued her and are giving her TLC.

Mabel is so sweet! I hope she hangs around your yard all winter, and I'm still hoping for a return of Herman!

And also that Punk-kin Pasta is so good! It is a quick dinner that we do often at my house.

Mabel in her witch hat... I die from cute!

Mabel in the witch hat! Cuteness overload! Blessed Samhain to you.