Howdy, y'all! I'm back from Austin, and boy do I have some stories and pics to share! I've decided to break my VVC posts up into one per day of the trip, so tonight, I'm covering everything that happened last Thursday. The official con didn't begin until Saturday, but the unofficial (but basically official) meet and greet took place on Thursday at 3 p.m. at Buzzmill.

Paul and I set off from Memphis around 2 a.m. Thursday morning with the hopes of making it there in time. Austin is about a 10-hour drive from Memphis, but we knew we'd be stopping lots to eat and pee and stretch. Twelve hours later, we were in Austin! And we had about an hour to kill before the event. So we went straight to Sweet Ritual, the totally vegan ice cream shop! 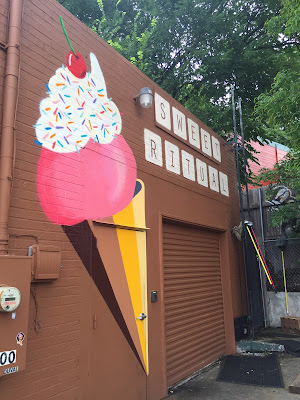 I went with the Peanut Butter Cup (with chocolate chunks!) ice cream in a cone. And OMG!! Best ever way to say hi to Austin. 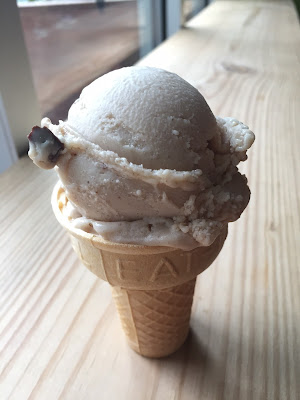 Paul went with Salted Caramel. He's really been into vegan ice cream lately, and he proclaimed this to be better than dairy ice cream. 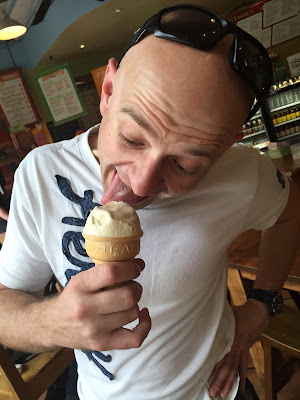 After ice cream time, we headed to Buzzmill, a little coffee shop/bar with homemade infused liquor and a vegan food truck out back. Notice the puddle in the lot. Austin got some serious rainfall just a few days before VVC, so Thursday was a muddy day. 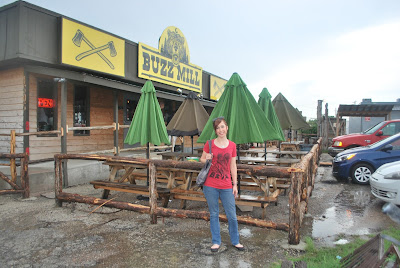 Since we were a little early, there weren't many people there to mingle with. So I went straight to the bar and ordered one of the VVC specials — the Orange Dreamsicle (orange, vanilla vodka, and almond milk). 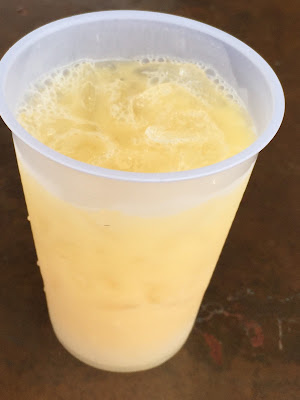 I quickly finished that drink since it was small and a tad weak. So I switched to beer (a hoppy brew from Houston), and then I got an order of Egg Rolls from the Golden Spike Rail Cart. One was stuffed with bahn mi ingredients and served with sriracha for dipping and the other had buffalo soy curls and ranch sauce. YUM!! 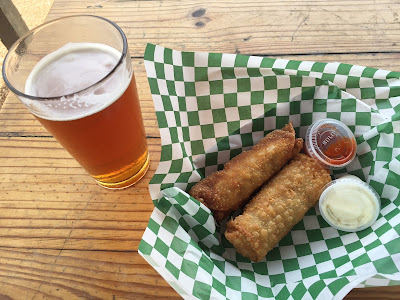 Slowly, vegans started pouring in, including my BFF Sheridan and her partner Drew! They drove in from Little Rock for their first Vida Vegan Con (and sadly, last VVC, since the event isn't happening again). 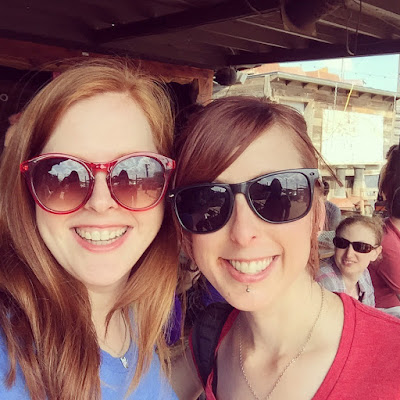 Once the event was kickin', I got the chance to chat with all my old blogger buds! There was Sayward of Bonzai Aphrodite and Joni of Just the Food. 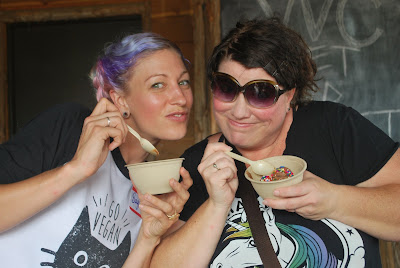 And my VVC homie Katie of Vegan Noms and her boyfriend Philip! They were about to chow on some tacos from Golden Spike. 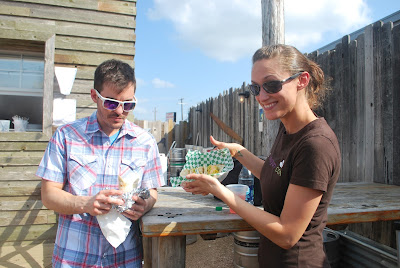 Here's Cadry of Cadry's Kitchen and her partner David! 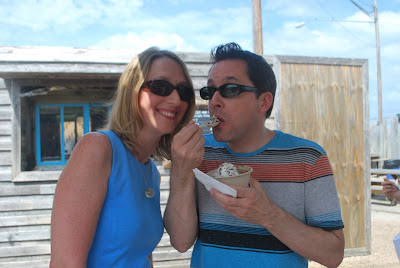 Our buddy Susan from Kittens Gone Lentil traveled all the way from Australia to be at VVC! Sheridan and I were both so excited to connect with her since we've all been internet friends forever! 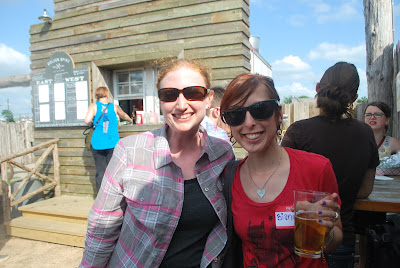 Jojo of Vegan in Brighton traveled a very long way too!! So happy to see her smiling face again! 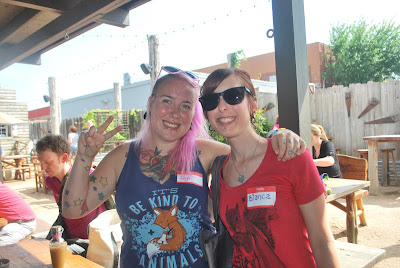 And VVC just wouldn't be VVC without the magical energy of Dan from The Gay Vegans! 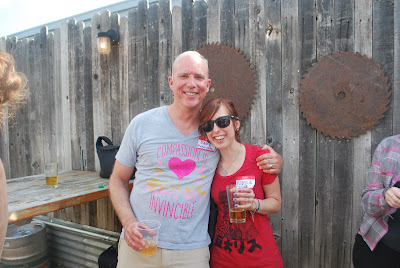 And of course, VVC co-organizer Jess (of Get Sconed) was there, holding a giant ice cream cone. Like you do. By the way, Sweet Ritual was at the meet and greet too! But since I'd already ice cream an hour earlier, I skipped seconds. 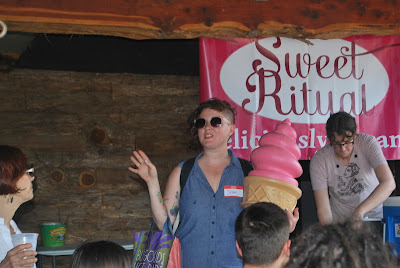 After the meet and greet, Sheridan, Drew, and I went out for dinner at Counter Culture while Paul hooked up with an old buddy from high school who lives in Austin. 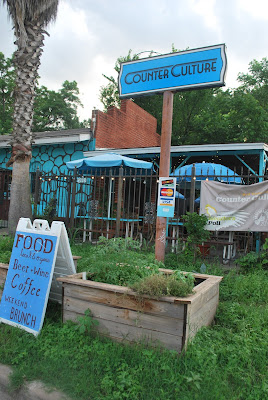 LOVE the inclusive bathrooms at this place!! 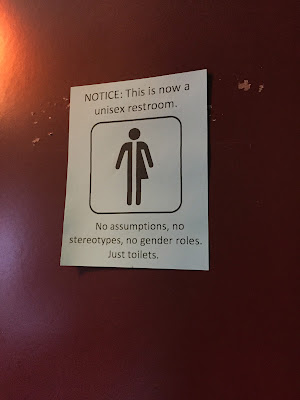 For my dinner, I ordered the Mac & Cheeze with Kale Salad and Roasted Veggies. The warm and creamy mac was loaded with broccoli and breadcrumbs. Very comforting! 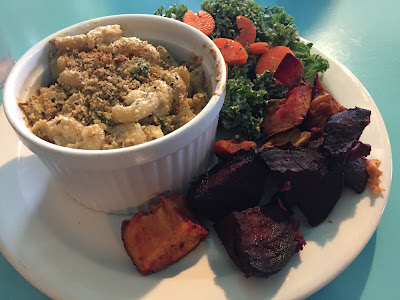 Since Sheridan and Drew got into town a little later than Paul and I did, they weren't able to join us at Sweet Ritual before the meet and greet. So they wanted to check out the ice cream shop after dinner! And of course I was down for ice cream twice in one day! We all got scoops in bowls with various toppings. 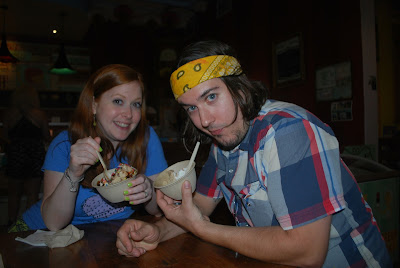 This time, I went with the Chocolate Chip Cookie Dough Ice Cream. When I asked the ice cream guy what topping he'd suggest, he said "cookie dough." So yes, I got cookie dough ice cream topped with cookie dough. No shame. 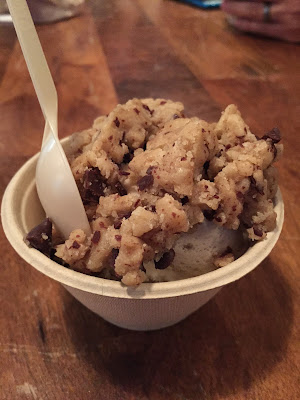 So that was day one! Lots of food and fun! I'll be back tomorrow with recap of Friday's VVC Vegan Bazaar!
Posted by Bianca at 9:34 PM

hah, i love sweet ritual! funny coincidence, i just went there today and got two scoops, one of peanut butter cup and one of salted caramel. sadly couldn't make it out to the vida vegan bazaar since i had non-veg family in town, but i'm glad you enjoyed austin and look forward to hearing about what else you checked out while you were here!

Love all the coverage!!!!! The memoriiiiiies… :)

OMG all the food looked so great! I just watched Drew's video, and it looked like you guys had a blast. I'm so sad it's the last year. Hopefully someone will carry the torch.

I just got home last night so I am reading through a million blog posts right now about VVC and feeling so nostalgic! :D
I was kind of nervous to come up and say hi and the meet and greet, but so glad that I did. Thanks for being my VVC buddies for the weekend. :D