Before I get into tonight's photo-heavy post, I've been asked to announce that Cassi is having a giveaway on her blog, The Pretty in Pink Vegan. She'll give a handmade gingerbread man holiday ornament by Memphis artist Funlola Coker to one lucky commenter. Click here to enter.

Each year, our Memphis vegetarian club, Food Awareness, has some sort of Thanksgiving potluck/meal/get-together thing. We used to hold the event at a comedy club, and a few members (myself included) would act out skits and sing crazy songs and do stand-up. But that club closed a few years back, and ever since, we've been holding the event at members' homes.

This year, Barbara and Ken (yes, they're names are seriously Barbie and Ken ... how cute is that?!) held the Thanksgiving potluck at their cute, Asian-inspired East Memphis home (the house has a pagoda roof!). It wasn't a traditional potluck where everyone brings a dish. Vaughan, who founded Food Awareness with me years ago and does most of the leg work on organizing, brought most of the food. And everyone else was asked to bring something only if they wanted to. Most people just brought wine or snacks.

One couple brought some of the best Vegan Sour Cream 'n' Onion Dip that I've ever had! 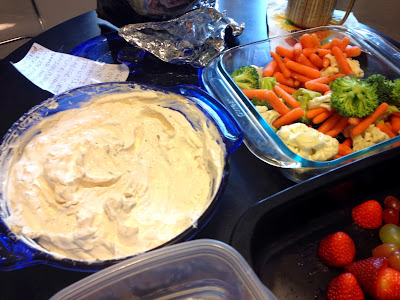 Diane brought vegan cheese dip in a Crock Pot, and it was so good! But I forgot to photograph it.

I brought a yummy stew from Robin Robertson's One Dish Vegan, but I'm saving that picture for a review post of her latest book tomorrow night. Here's a little glimpse at everything else we ate though.

Rather than roast a traditional Tofurky, Vaughan grilled and sliced Tofurky Sausages. Since I'll be eating plenty of faux turkey over the next few days, sausage was a nice twist. 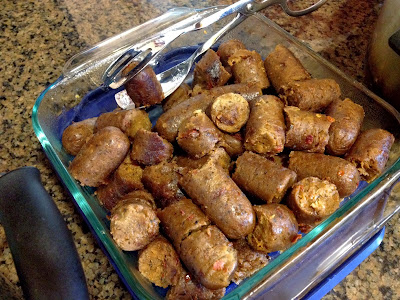 Perhaps my favorite dish was Vaughan's Curried Fingerling Potatoes. These were coated in a spicy curry sauce that was just awesome. 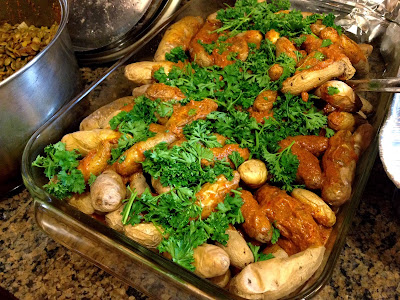 I also really loved his Wheat Berries with Raisins and Walnuts. Chewy wheat berries are probably my favorite grain ever. I should really cook more wheat berries. 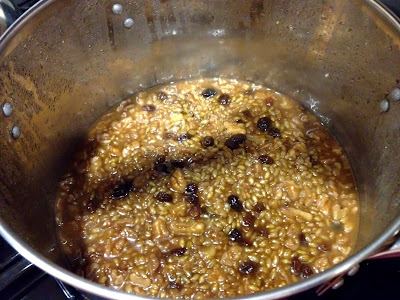 We also had a Tomato Millet Pilaf. 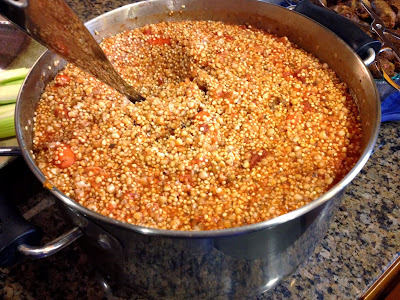 And there was Vaughan's Vinegar-Seasoned Kale. 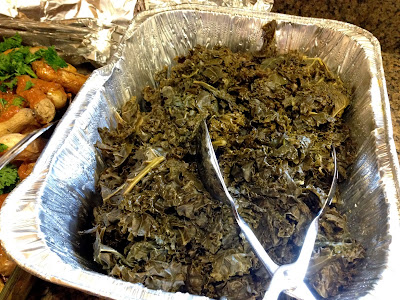 And we had Green Lentils with Baby Carrots. 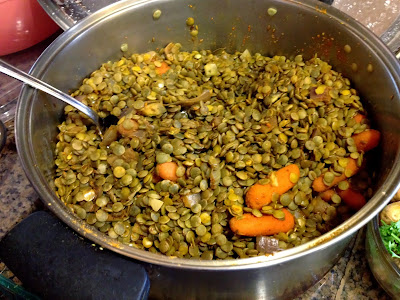 As you can see, Vaughan cooks very healthy vegan meals. Grains, beans, and veggies are his staples. He eats way healthier than I typically do! But it felt good to go crazy with a massive plate of low-fat, whole foods-based vegan dishes, especially considering that this Thursday, I'll be eating so much Thanksgiving madness.

Sadly, no one brought dessert. So Cassi, Greg, Brodrick, and I went back to my house and made mini Vegan Donuts in my Bella Donut Maker. I picked up the donut maker at the Goodwill a few months ago, but this was my first time trying it out. These were so soft and cakey! 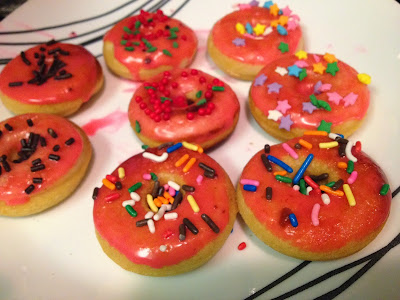 Whoa that is a CRAP TON of tomato millet!! Looks like an all around great spread, but...no dessert??? What were they thinking?