This Saturday, the India Association of Memphis hosted the 11th annual India Fest at the Agricenter. My friends and I go every year, and we stuff our faces with samosas and dosa and all manner of Indian fare. It's a huge event with thousands of people roaming the aisles of food vendors, getting henna tattoos, and shopping for saris.

Here I am in front of the awesome chariot they built to honor the past kingdoms of India. 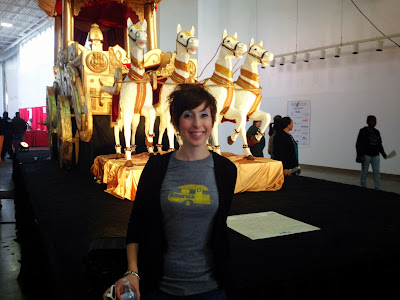 And here's my friend Cassi with her son Keithon. 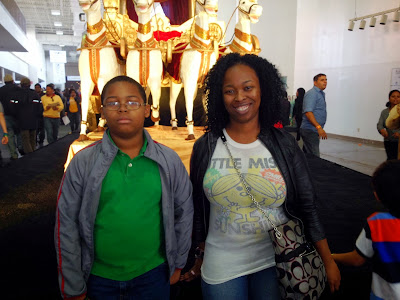 When we arrived, we were famished, so we went on a mission for food. Vendors sell regional fare from most of the states of India, so there's plenty of variety. I always seek out chaat (Indian street food) because it's usually super-cheap, and eating snack foods means I can eat more before I'm full. I started with Pani Puri. 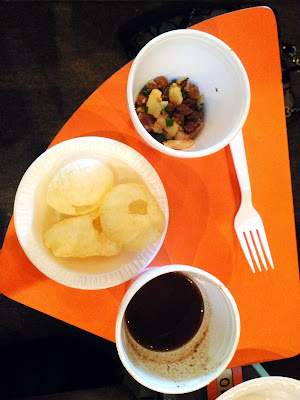 Pani Puri are these little crispy, hollow pillows that you stuff with a chickpea and onion mixture. And then you pour a sweet and tangy tamarind sauce inside. These are fun because you get to build your own snacks. Here's a pani puri that I assembled and promptly stuffed in my face. 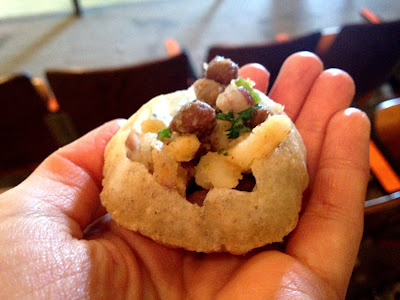 Next, I grabbed a Samsosa, because, samosas! Nothing says comfort food like a potato- and pea-stuffed fried dumpling. 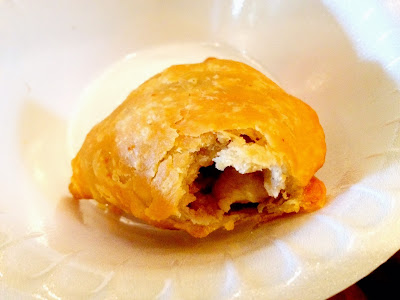 When I spotted the Bhel Puri at another vendor table, I had to have it. This is one of my favorite Indian snacks — crisp puffed rice, crunchy sev sticks, cilantro, tomato, onions, and bits of fried dough coated in tamarind sauce. 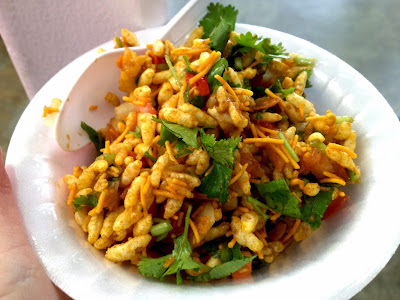 By this point, I was getting pretty full. But I couldn't do India Fest without a Masala Dosa served with Sambar and Coconut Chutney! Dosa is a thin, savory pancake, and these were stuffed with seasoned potatoes. You tear off bites and dip them in the sambar (veggie stew) and creamy chutney. 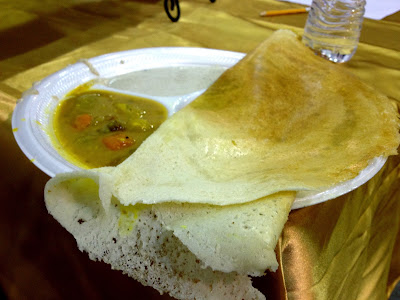 With full bellies, we were finally ready to venture into the marketplace area where people were peddling saris, bindhi stickers, and all manner of shiny jewelry. These necklaces were 5 for $20! 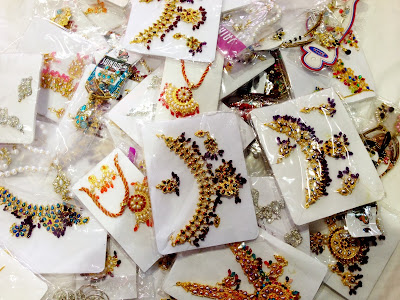 Cassi and I both picked up lots of jewelry we intended to buy, but in the end, we put everything back and Cassi settled on a scarf. I bought this adorable statue of Ganesha, the Overcomer of Obstacles. 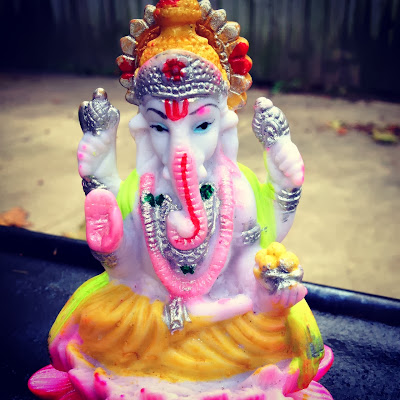 I usually get a henna tattoo on my hand while I'm there. Most henna artists there charge about $5. But last year, when Cassi and I both got henna, Cassi quickly learned that she's apparently allergic. Her hand got all puffy and itchy under the henna ink. I didn't want to make her wait on me to get henna since it takes awhile. So I forwent the henna this year. We had a lovely time, and now I have some serious exercising to do to work off all those fried carbs.
Posted by Bianca at 7:59 PM

Fun! I was in a Punjab/Guyanese part of town today and really loved all the wafting smells and decorations up for Diwali.
Do you usually ask if they use ghee, or is the food labelled as vegan? I am always too paranoid to eat even seemingly vegan food out.
Bummer about the henna! Have you ever tried to do it yrself? I have a kit I've never used, it's been around for years!

How beautiful! That chariot is amazing.<3

I LOVE samosas but haven't eaten any since I moved out (about 2 years!)
I'd definitely want to attend an event like this. Different cultures have always interested me and food is just like the cherry on top. (:

Hey Maud, I don't usually ask about ghee and just hope for the best. I've found that many South Indian dishes (the dosa, much of the chaat) are less likely to have ghee. I avoid naan cause I know it's typically made with ghee. Cold stuff like Pani Puri and Bhel Puri doesn't seem like it'd have ghee in it.

Wow, I would LOVE to go to an India Fest! I'd get henna and food, too. I have 2 Ganesh statues already, so I'd look for a different deity this time, but I love yours!

I love this! I wish we had a festival like this in Chicago (though I am so greatful for our Devon Ave neighborhood which has amazing Indian food and culture every day!). Bhel Puri is my absolute favorite!!! And what a great event for your friend to bring her son to. I love getting kids excited about other cultures and think its so important.