Hey everybody! I'm back from Atlanta VegFest, and I didn't even get eaten by zombies (okay, I know ATL people are tired of the Walking Dead jokes, but I can't help myself). My friend Cassi (who came with me) and I ate so much food, watched some great cooking demos, got Isa to sign Isa Does It, and met some fun new friends.

I have so many pictures from the weekend-long trip, so I'm breaking my pictures into several posts. Tonight, I'm posting about the festival itself, and tomorrow (and maybe the next day) I'll show y'all what I ate when I wasn't at VegFest.

This was the second year for Atlanta VegFest, and it was twice as big as last year! I've had the honor of doing demos and signings both years, and those Atlanta kids are so much fun. And so well organized. The event took place at Le Fais Do-Do, large event venue with two speaker/demo rooms and two vendor rooms.

I made the Eggless Tofu Olive Salad and Vegan Pimiento Cheese from Cookin' Crunk during the first demo of the day. It was nice to get done early. Here's my standing-room only crowd!! 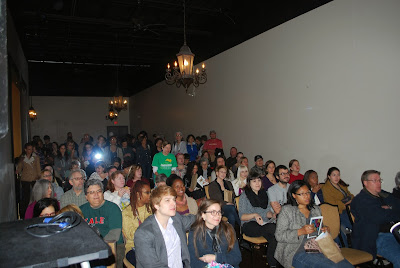 It's so exciting when I can demo to a packed room. I've had more than one occasion where only a couple folks showed up to watch a demo (not at VegFests but at local events on occasion). In the words of the great Macklemore, "that shit will check your ego." But Atlanta had a great audience!!

We had a little time before my demo, so Cassi and I took care of the basics —bought a VegFest tee, some Crazy Rumors vegan lip gloss, and entered tickets into the raffle giveaway. And then Cassi went on a quest for sugar. She found the Mama Bakes Safe Cakes booth. Look at that giddy face. 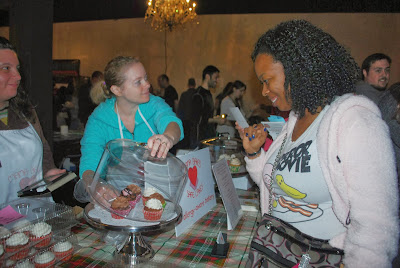 And she settled on a Chocolate Raspberry Cupcake. 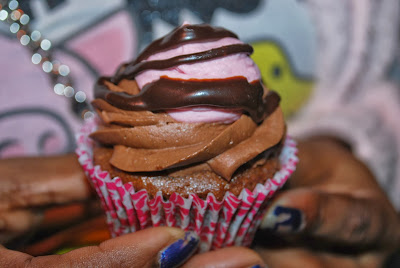 One of my favorite vendors was Judyfood. She lives in Georgia and makes this amazing vegan artichoke dip and spinach dip. She wasn't selling it at the event, but the local Atlanta Whole Foods stores carry it. I went looking for some at a Whole Foods after the fest, and they were all sold out. Sadness. 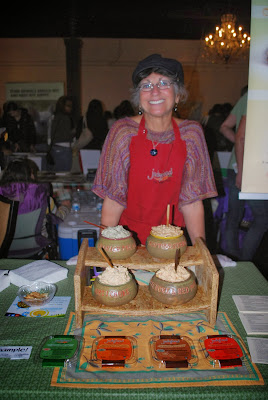 Gutenfleischer's Deli/Dough Bakery had the best crowd all day since they were giving away samples of their homemade vegan meats, cookies, and Treeline cashew cheese. Here's Simon sampling some roasts. This stuff was so good. 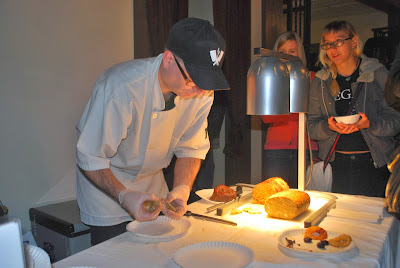 Lots of vendors were selling meals this year. So around lunchtime, I tried the offerings from Loving Hut's booth — Tofu Spring Rolls and Vegan Ham Fried Rice. 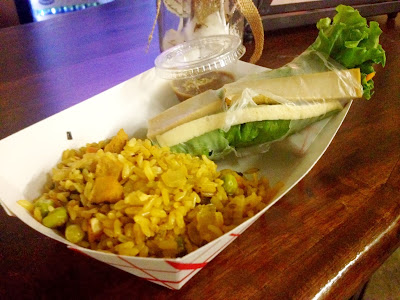 I spent much of the day at my publisher's table signing copies of Cookin' Crunk. Here I am with the Book Publishing Company's Rhiannon. 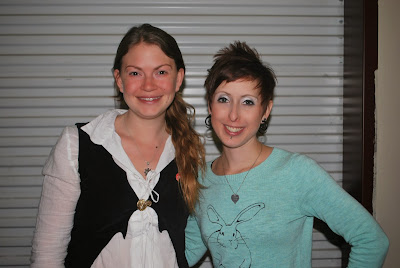 VegFest had a stellar cooking demo line-up this year. Vegan rock star Isa Chandra Moskowitz was there demo-ing a quinoa salad from her new book, Isa Does It. I'd been waiting to buy my copy at this event so I could get her to sign it. 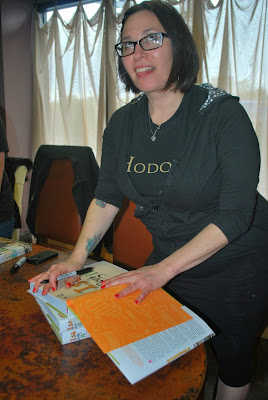 And finally, the day ended with an awesome demo by my internet pals Annie and Dan Shannon of Betty Goes Vegan. 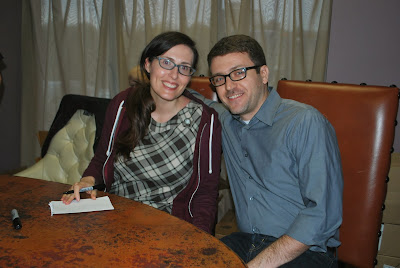 They made macaroni salad and vegan ranch dressing. I've been following them since the old Meet the Shannons blog days. And Betty Goes Vegan is one of my favorite vegan cookbooks. I brought my own copy to have them sign it there, but stupid me left the book in the hotel room. D'oh! Instead I had them sign a piece of paper that I can tape inside my book.

Well, that's all for VegFest! Here's Cassi excited that the day was ending so we could grab dinner and wine. But more on that tomorrow. 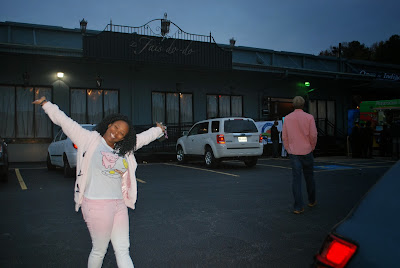 The heat lamp is so awesome on the vegan meats from Gutenfleischer's. I've heard lots of good things about them. I hope I'll get to try them someday!

I wish I could have gone... It would have been quite the road trip, but I'd faint if I met Isa. She had to cancel her trip to Austin this year.

Sounds like such an amazing day! We didn't have any sort of vegan fest in my city this year, next year I am heading south the celebrate in some of the other states that have them.

It was really great to see you. Thanks for coming. Elena and I always talking about Cooking Crunk.

Geez what an amazing event. As what feels like the only vegan in Louisiana, I'm sure it's a long time before we have this kind of show in Cajun Country!!! Looks Amazing!!!
Kati
louisianavegan.com

Great demo. I've had your book for a while, but I totally want to try the stuff you made now. My husband and I are in the crowd photo! omgz we're famous.

I wish we had been able to go earlier to catch your demo! We could only stay for a bit and it was later in the day when all the food was like sold out :-(