Every year around this time (April 21st-29th this year), vegans the world over hold bake sales to raise money for the charity or nonprofit organization of their choice. Since the Worldwide Vegan Bake Sale phenomenon began a couple years back, I've been wanting our Memphis veg group, Food Awareness, to participate. But I was just lazy every year and let the bake sale dates pass me by without organizing one.

But this year, we changed all of that! Food Awareness held its first vegan bake sale on South Main during the monthly Art Trolley Tour, when hundreds of people crowd the downtown arts district for gallery receptions (with free wine!). That means lots of foot traffic, which is perfect for a bake sale.

I put a call out to my baking friends on Facebook, and you wouldn't believe the response of people willing to help with this! We had some bakers who weren't even vegan but whipped up amazing vegan goods! I wish I could share pictures of everything, but if I did, this post would be ridiculously long. So I'll just share the items that photographed the best. Some were packaged in such a way that the pics didn't turn out clearly, so I'll just name those off sans photo.

I made three items — the Peanut Butter Blondies and Cowboy Cookies from Vegan Cookies Invade Your Cookie Jar (neither pictured) and the Peanut Butter Rice Crispy Treats with Chocolate Chips from The Kind Diet: 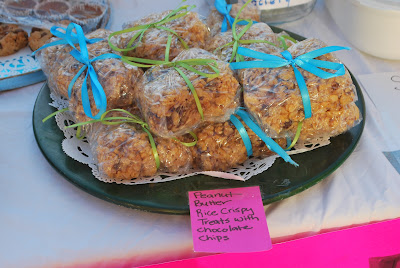 Karina Khan, who bakes all of the cakes for Imagine Vegan Cafe and Nashville's Wild Cow Vegetarian Restaurant, donated a dozen big cupcakes, a few cream cheeze brownies, and about 100 mini cupcakes in several flavors! 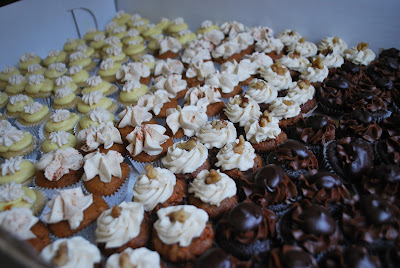 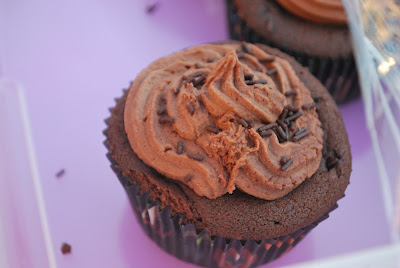 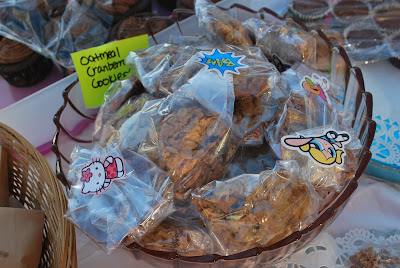 Amy Schiller and her family brought these awesome Orange Cupcakes: 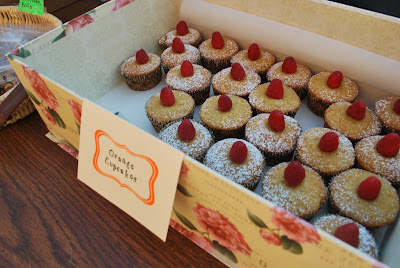 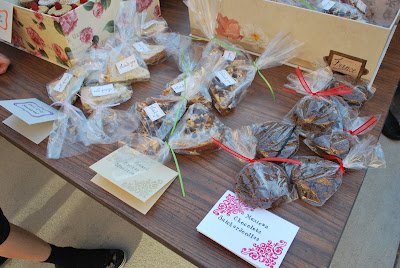 Stephanie (Poopie Bitch) made Peanut Butter Oatmeal No-Bakes (not pictured) and Double Chocolate Mocha Cupcakes, which she wrapped individually in plastic cups and cellophane. People seemed to love the portability of these: 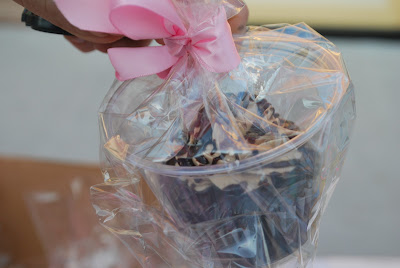 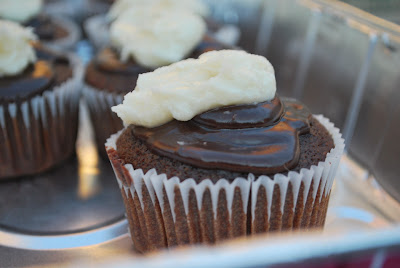 From the Southern Table bloggers Angela and Paul Knipple, who recently put out The World in a Skillet cookbook, brought some super-spicy Mexican Hot Chocolate Cookies made with chipotle, cayenne, and a sea salt topping (not pictured) and Pumpkin Molasses Cookies: 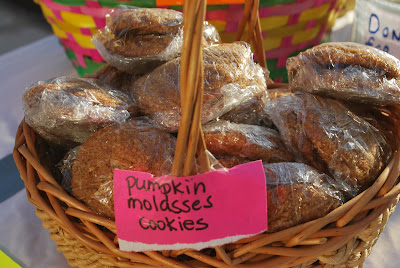 Lots of non-vegans stopped by our booth, gasping in amazement at how normal vegan desserts were! Some buyers were vegans and were thankful to find lots of egg-free, dairy-free treats for sale for a good cause. And others, like this guy Vaughan (plant costume guy) and I are talking to, were just looking for tips on cutting back on meat: 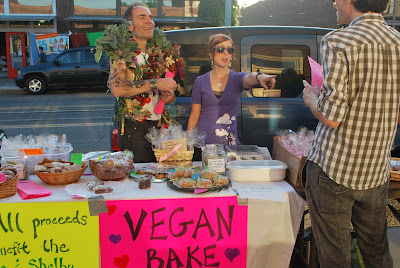 At the end of the night, we had made some new friends, sold about a three-fourths of our goodies, and raised a ton of money! Yea for vegan bake sales!
Posted by Bianca at 10:06 PM

Oh my, everything looks sooo delicious! My university held a vegan bake sale this weekend but the treats didn't look nearly as nice as yours, but nevertheless they were delicious!

Those blondies look especially incredible (my favorite treat)! What an awesome bake sale!

Wow those are some incredible sweets! Great work!

Such a wonderful thing you all did and such a great accomplishment :) All of the goodies look so yummy!

So much yumminess! Congrats on raising lots of money!

Will this type of worldwide bake sale happen every year? (Yours looks beautiful, btw).

Awesome! I bake monthly for an animal welfare org. bake sale and I love being involved!

I have yet to tap into the vegan baking world! I have tried vegan baked goods from whole foods, but i havent made anything myself. I hear nothing but amazing things about vegan baking, I definitely wanna try it and maybe even host a bakesale here in my area!