If there's one thing that all vegans have in common, it's that we LOVE to eat. Thankfully, for most of us who don't live in vegan meccas like Portland or New York, our dining out options are somewhat limited. In other words, when we go to the all-you-can-eat buffet, well, it's probably a good thing there's only a few dishes we can eat. But last night, I experienced what non-vegan food addicts must feel every day — food coma!!!!!!!!

Imagine Vegan Cafe hosted an all-you-can-eat vegan appetizer and dessert buffet for their one-year anniversary celebration, and um, well, I literally ate all I could eat without vomiting. I left that place so full that I had to go home and lay down for an hour without moving. I was still stuffed when I woke up this morning. Here's why:

Here's Imagine co-owner Kristie and her new baby Madalynn, taking a break from stocking the buffet to actually enjoy her own party: 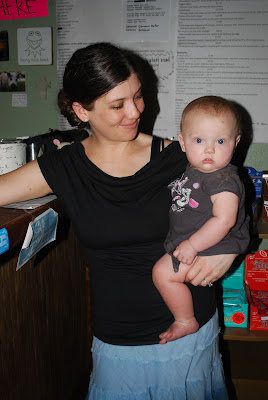 And here's her husband/co-restaurant owner Adam, looking wide-eyed as he noticed how very packed the place was. Every seat was full, and people were having to stand to eat! I'm so impressed that a vegan cafe can draw such a crowd in Memphis: 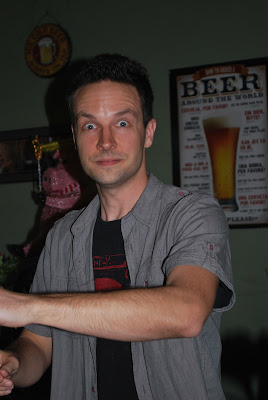 After I let my first three plates settle a bit, I hit the dessert table. This adorable cake was just for looks: 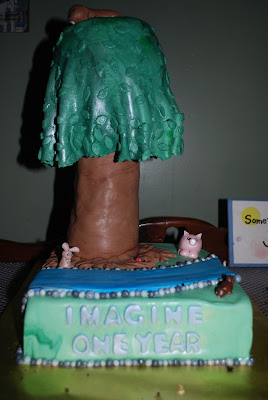 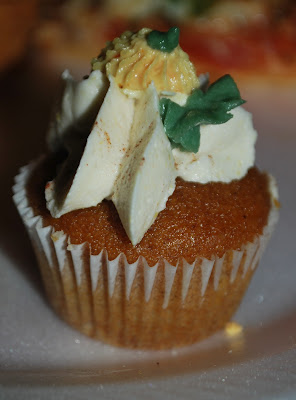 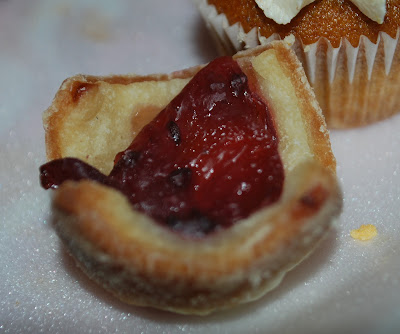 And if that wasn't enough, I couldn't resist a slice of the Triple Chocolate Birthday Cake: 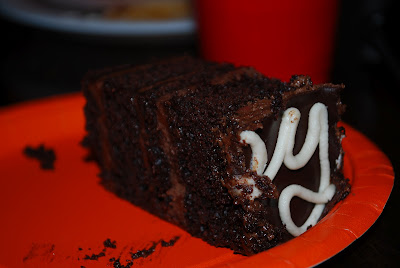 Every bite hurt at that point, but I was no longer eating for satisfaction. Rather, I was eating because I could. As you can see from how stoned I look in this picture, food coma had already set in: 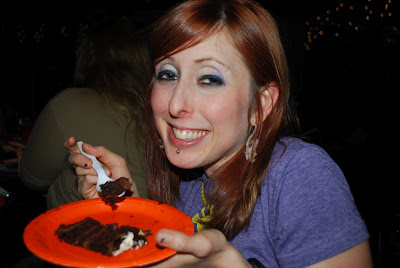 I wish I could have just a few of those yummy looking treats... if I had been at the buffet, I probably would've eaten until I died :)

You crack me up! Looks like a side-splitting party!

Hahaha I've been food drunk before :) Looks like an amazing spread! That spinach dip looks really delicious and the pizza and potato skins look great too! I would love those pumpkin cupcakes and the chocolate cake looks perfect! Yum!

Wow, everything looks incredible. I really don't blame you for overindulging! The tater skins look crazy.

So much food! I love all the vegan takes on classic appetizers. And the pumpkin cupcake is so cute, the little pumpkin on top!

I wish I could attend such an event. The food looks amazing and so comforting! I'm happy too us vegans cannot stuff our face everywhere, like in dessert shops and all.

What fun!! Happy anniversary to a magical-sounding place. :)

This post made me laugh so much. Thank you for sharing!!! Every last morsel looks divine and I respect, 100 percent, your choice to continue eating despite your extreme discomfort...ha!

Reading this and seeing the photos was the best vicarious thrill in a long while! Thanks.

Your pizza's not even on the plate, that's how full it is!

It all looks amazing! You are so lucky to have a place like Imagine so close.