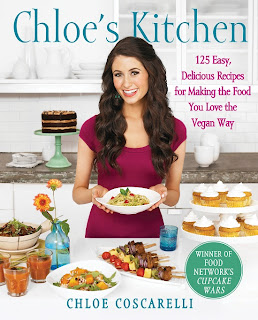 You might remember Chloe Coscarelli as the baker whose vegan cupcakes beat out non-vegan cupcakes on Food Network's Cupcake Wars in 2010. It was a big moment for vegans. Proof that our vegan baked goods are not only "just as good" as their dairy- and egg-containing counterparts, but actually better. I mean, vegans have always known that, but Chloe's cupcakes gave proof to the world.

Now the award-winning baker has released her first cookbook — Chloe's Kitchen: 125 Easy, Delicious Recipes for Making the Food You Love the Vegan Way. Yep, it's a mouthful ... of awesomeness. This full-color book is loaded with stunning photos of classic comfort food.

In fact, everything looks so delicious that I had the hardest time deciding what to try first. But since Chloe's family is of Italian descent, I figured I'd better start with pasta. There's a whole chapter on pasta called "Oodles of Noodles" with recipes ranging from Italian classics like lasagna and fettucine alfredo to Chinese chow mein and Drunken Noodles in Cashew-Shiitake Broth.

But the gorgeous photo of Stuffed Shells with Arrabiata Sauce was calling my name. Unfortunately, I couldn't find jumbo pasta shells anywhere! So I settled on manicotti, which wasn't nearly as attractive: 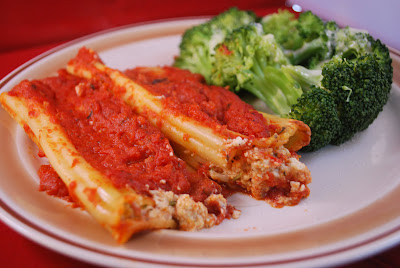 Don't let this ugly picture fool you. This dish was deeeelicious! The manicotti is stuffed with a homemade tofu-based basil ricotta and then it's topped with a homemade spicy tomato sauce (I added extra spice to mine). Yea, shells would have been prettier, but I'm sure it tastes about the same.

What I love most about this book (besides the lovely pictures) is that it focuses on real food. You won't find any fancy-schmancy uber-gourmet crap and, while healthy, the recipes aren't over-the-top with nuts and seeds and hippy vegan stuff. It falls somewhere in the middle, in that comfortable place where mom's home cooking falls.

Other savory dishes on my to-make list include the Avocado Pesto Pasta, Country Meatloaf and Golden Gravy with Orange-Scented Cranberry Sauce, Tempeh Piccata, Pancakes for Dinner (!!!), and BBQ Pineapple Pizza. Also, the recipe for Chloe's Award-Winning Mango Masala Panini looks like a must-try.

But you're probably thinking, "Wait, I thought Chloe won Cupcake Wars for her cupcakes? What about dessert?"

If you're looking for a compendium of easy-to-prepare, food-for-the-soul recipes, you'll find just that in Chloe's Kitchen.
Posted by Bianca at 9:52 PM

I'm really looking forward to receiving this book (whether it's for my birthday or I get a review copy, I will have this book in my hands at some point soon, I hope!) and I'm happy you're enjoying it!

I'm on the waitlist for this at the library, and I'm #2 on the list, so I'll get to try it out very soon- can't wait!

I made the Fettuccine Alfredo yesterday from her cookbook, it was AWESOME!!

Tomorrow is the lasgna, Im having surgery next Thursday, so will portion and freeze so I will have healing food to eat while healing!

That's another tempting book. I love full-color books, and I find there are so few of them in the vegan world.

TAKE A LOOK AT THIS: ♥♥♥♥♥
Biological, creative energy.

BREAD TYPE KR-IRL WE CAN ALSO PACK BY VACUUM PACKING:
For example 3 pieces, after that it’s able to use for OVER 1 YEAR. Biological energy 80% of ENERGY (low carbohydrates) for so called ROUTES, trips, long journeys in other words: LOGICAL PROHEALTHY NECESSITY. Also ACTIONS of HUMANITARIAN HELP !!

I love this book! I;ve also made the stuffed shells (I had a hard time finding shells too; had to go to 3 stores before I found some) and I've made the pancakes for dinner (for brunch) the last 2 Sundays. I have yet to make a bad recipe from this book. Her buttery biscuits are sooo easy and yummy!

Biscuits?? I've had this book for a while now and didn't realize there was a recipe for them.

Best cookbook ever, and the recipes I've made so far have been pretty easy.

My favorites so far are the spinach artichoke dip and the chocolate creme brulee.

I can only find large quantities of basil in the summer. Can you freeze the garden ricotta?