I feel a little ashamed to say I'd not been to Al-Rayan in nearly six years, and that long-ago visit was my only one until this past Friday. You see, this quaint Middle Eastern eatery is in walking distance from my house. I've lived in this neighborhood for three years, and Al-Rayan just so happens to have the best Middle Eastern fare in town. What have I been waiting for?

Honestly, I'd forgotten how delicious the food was or I'd have been back a long time ago. Thankfully, I had my reminder this Friday at a dinner meet-up with my vegetarian/vegan besties.

The place is tiny and tucked into a rundown shopping center strip, the same strip that houses an H&R Block, a ghetto corner store, and a not-so-impressive Vietnamese joint. The sign is faded, and you can barely make out the name "Al-Rayan." You kind of just have to know where it is. Inside, a large television plays a station from Yemen, and traditional decor hangs on the walls. There are a few small tables and this adorable seating arrangement on the floor: 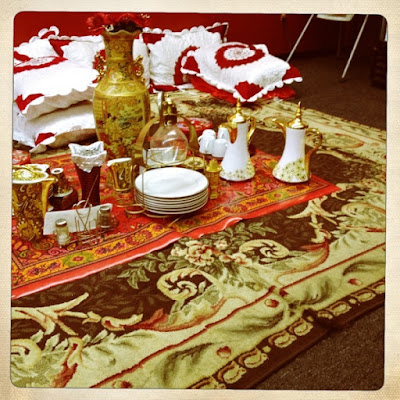 I wasn't going to order anything but water to drink, but when my friend Steve's cute little cup of Arabic Coffee arrived, I knew I had to have my own: 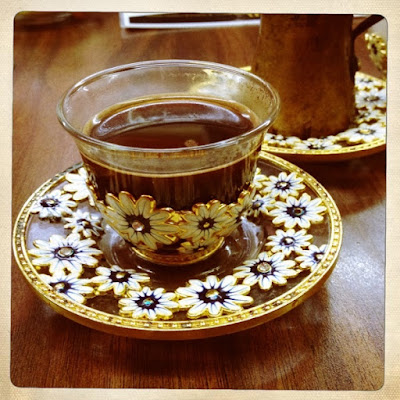 This teensy cup of thick, black coffee was unlike any coffee I'd ever had. I've tried other ethnic coffees, and I'm used to the thick, almost-sludgy consistency. But this coffee had a slight floral aftertaste. It was amazing! I wish I knew their secret and I'd make Arabic coffee every morning. Or I guess I could just walk down to Al-Rayan and buy some.

The server brought us a basket of fried pita strips as an appetizer, but I forgot to photograph those. For my entree, I went the traditional route and ordered the #7, a platter of falafel, hummus, salad, pita bread, tahini sauce, and chili sauce: 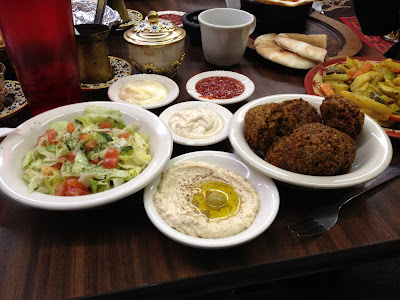 Besides the usual ground chickpeas, their falafel is also made with ground vegetables. I couldn't tell what vegetables, and the menu just says "vegetables". They definitely had a heartier, more satisfying bite than most falafel I've had. I stuffed the falafel and salad into pita bread spread with hummus, tahini, and chili sauce. 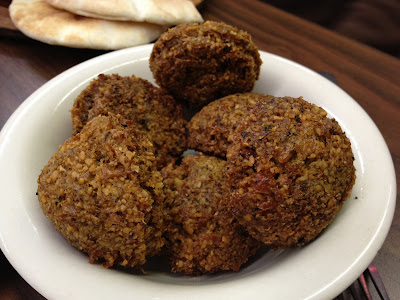 The hummus was also perfection. It was creamy and garlicky in all the right ways. Plus, look at that generous pool of olive oil and the olive garnish! 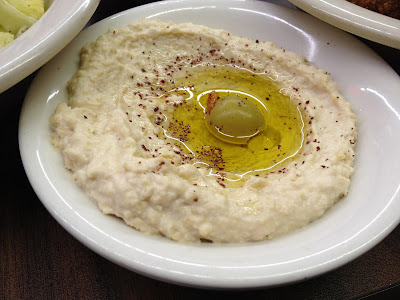 My friend Lara, who suggested the restaurant, knew a secret about the menu that I wasn't privy too. Al-Rayan also serves a few Ethiopian/Etrian dishes like Ful (mashed fava beans with olive oil, lemon juice, onion, and garlic). It's served with raw tomatoes, onions, and pita bread: 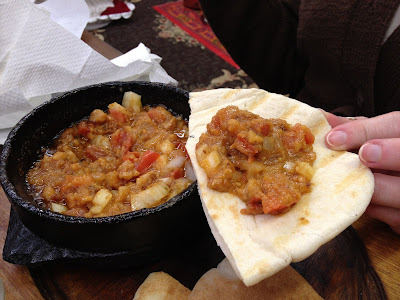 I took a bite, and her dish was phenomenal. I'll definitely be ordering that next time. It's listed on the menu, but it's tucked on the backside and written in smaller letters. There's also a Vegetable Sandwich and a Falafel Sandwich, both wrapped up in a massive pita wrap. Needless to say, there's plenty for vegans at Al-Rayan. Plus, the ladies who work in the place are the nicest people ever. And I got my falafel spread (enough for two meals) and coffee for only $8!

As far as I know, living in the Middle East and all, while ful is grown in Ethiopia, it is also a traditional Middle Eastern dish. It's considered Egypt national dish, too. However, the dish on the pic you posted looks quite different from what is served in local hummus joints, that use recipe similar to this one: http://www.epicurious.com/recipes/food/views/Ful-Medames-Egyptian-Brown-Fava-Beans-352993

(I love your blog, it was one of of the thing that pushed me back to veganism; keep it up!)

wow, that meal looks phenomenal! your falafel looks absolutely perfect, so crispy and hearty. now i'm in the mood for falafel ;)

The coffee was probably flavored with a cardamom pod - that's what separates Turkish coffee from Arabic coffee (the method is about the same). The Ful is also an Egyptian dish, though I have to say that doesn't look like the ful I ate in Egypt (no tomatoes there - just a garlicy bean paste drowned in olive oil). The whole spread looks yum!

I love that you can sit on the floor!

I would've ordered what you did, but minus the salad, add lentil soup (if they have it)...or maybe that ful!

Yeah, I think Sarah is right -- almost certainly cardamom in the coffee. You can buy coffee roasted with cardamom in most middle eastern markets.

Hey Bianca,
I really love reading your blog, and I always leave hungry and inspired. I wanted to comment though on your use of the term "ghetto" as an adjective. I've seen it used that way a few times on your blog, and it always leaves a sour taste in my mouth (which conflicts deeply with the rumbling tummy the rest of the post induces ;p). To be honest when people use the word "ghetto" in this context, it has overtly racist and classist overtones. You seem like a very socially conscious person; blogging against oppression in our food industry, as well as working at an alternative paper on LGBTQ issues. Both of these things show me that you are progressive with very good intentions. I assume that your use of ghetto is idiomatic, and that you have probably not thought about the racial or class implications of the word. I'm not trying to tell you how to talk, just offer you a little bit of insight into why it might not be the best word choice. :) Thanks for your time.

Well looks like I have another place to add to my list of restaurants I want to try in Memphis! Haha! That falafel looks amazing!

Vanessa, I certainly didn't intend for "ghetto" to sound racist or classist. By ghetto, I just mean rundown and kinda skeezy....like dudes-drinking-40s-out-of-paper-bags-in-the-parking-lot skeezy.

That looks wonderful! On the list for future Memphis trips!

Oooh! We have a place like that here too! Totally forgot about it. Def place for our next date night!

I love Middle-Eastern fare. The humus with that olive oil looks insane.

I've been wanting to make some ful for awhile. I found a bunch of dried beans and now it's just a matter of finding a good recipe! :)

I ate SO MUCH ful for breakfast when I was in Ethiopia. It is so incredibly delicious. I wish I lived within walking distance of a restaurant that sells it! Or even driving distance!

Loved this review! Count me in for the next visit.

OMG that looks like paradise! I must go to there :)