Just about everywhere you go, there's a veggie burger on the menu. But often, restaurants resort to using Boca patties or some other pre-made frozen disc. Now, I love me some Boca. But I can have that at home. When I dine out, I want a homemade, original patty. Luckily, there are several delicious vegan burger options in Memphis. Here are my favorites: 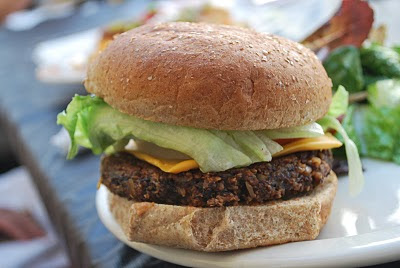 This housemade patty is, hands-down, the best burger in town. It's firm enough that it won't fall apart when you eat it, but soft enough to prove that it is, indeed, a veggie burger. It boasts a smoky flavor, and though I'm not sure what's in it, it seems to have some sort of grain base. And, best of all, they offer vegan cheese and vegan mayo. 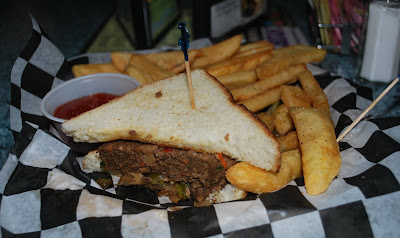 Before Fuel came along, I never believed anyone could top Huey's veggie patty. It's firm and meaty, even though it's packed with veggies. You can actually see flecks of carrot and other vegetables peeking out. Plus, it's served in all kinds of ways. My fave is the one above — Texas Toast-style with jalapenos, mushrooms, and onions (ask them to leave the butter off the toast). You can also order the patty West Coast-style on a whole wheat bun with guacamole or the traditional Huey's burger with lettuce, tomato, onion, and mustard. Huey's also serves a black bean patty, but I've never inquired of its vegan-ness. The veggie patty is definitely vegan though, as I once had them read me the ingredients. 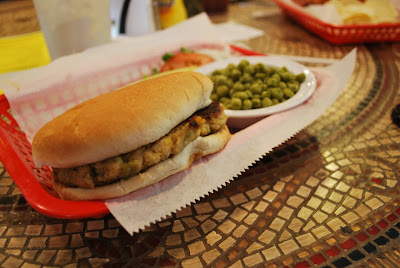 This burger is generally always vegan, but be sure to ask first. It's made fresh daily, and the last time I ate there, the server told me the cooks sometimes add cheese. But he was more than happy to check, and lucky for me, it was dairy-free that day. The patty is really veggie-heavy, and different from any other burger I've tried. I detect a hint of broccoli, maybe. Or potatoes. Honestly, it's a mystery, but whatever's in it is delicious. Plus, its fried, so that adds to the flavor. The flat patty is quite large, but not too filling. It comes served with chips, potato salad, or the fresh veggie of the day. I love the English peas! 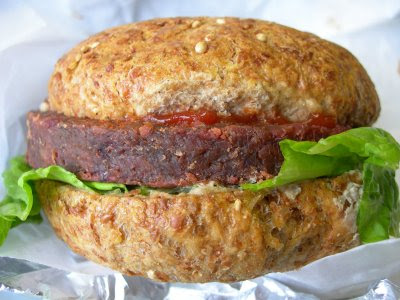 This patty is totally raw! Memphis' own raw guru Balewa prepares several different versions of his famous raw veggie burger in a dehydrator. But he'll have to kill you if he tells you what's in it. You really just have to trust him on this one. The burger obviously has some beets, which would lend it that pink-ish color, and I detect some nuts. But who knows? It's served on an Ezekial sprouted grain bun, so that makes it not quite as raw. But if you're a purist, order sans bun. I prefer it on a bun with a tasty side salad.

So there you have it. If you live in Memphis or you plan to visit soon, these are the best places to grab a burger. If you need address and phone number information on any of these locations, check out my Memphis vegan restaurant guide.
Posted by Bianca at 11:29 PM

YUM! They all look good to me!

Yummy yummy. I've never tried vegan burgers before. I think it's high-time I tried some.

Sometimes I worry it may seem to obvious for a vegan to get a veggie burger, but who cares when they're that good! I've been having trouble finding vegan veggie burgers in restaurants as of late...perhaps I should start a list, too!

Oh, yeah. I could go for all five of those right now. Next time I'm in Memphis I'll have to check out Fuel.

That first burger does look amazing! That's great that they offer vegan mayo and cheese - that is almost unheard of in Tucson. Maybe I should start my search....

Yum! I might go a veggie burger tour when I come back to Memphis!

Wow & yum, these all look amazing!

I completely agree!! I have the same trouble with some restaurants using a frozen patty and I'm like, ummm, yeah, I can have that at home right along with my lean cuisine. I LOVE a good homemade veggie burger. These look yummy.

I love this list! Hope I can take a trip out to Memphis to try some of them someday :)

Dang. I feel a strong need to seek out a veggie burger ASAP.

Awesome post. These look great, especially number 3. I am very disappointed when places claim to have veggie burgers but then it says something on the menu like "boca" patty or "morningstar farms". I'm with you, I can make those myself. I want my veggie burgers to be something just a little different, something I am too lazy or unable to make.

Awesome! I wish I could've tried all those in Memphis! They look amazing!

Hey! I couldn't find your email address but I wanted to put FitFluential.com on your radar because I think you would be a good fit. Check out http://fitfluential.com for more info on who we are or feel free to email me if you have any questions-Tiffany@fitfluential.com

i am so jealous! i am from portland, but am stuck in alabama, where they have NO veggie restaurants period. can't wait to get back to portland!

I love Huey's black bean burger- never tried the veggie burger but it's on my list now! And I have yet to get to any of these cool places in mid-town cause I live way out, but Fuel will be my first stop- that burger looks goooood!

Thanks for the tip. I've followed your advice twice now and was not disappointed. Fuel was closed when I stopped by on Thursday, but I spotted Hueys and drove down. That burger was great. And the onion rings!! I had the classic style. Yum, yum. Next time it's Balewa.

Eclectic's Blackbean patty is not vegan (asked owner yesterday) nor are their buns. Bummer because they are so good.
Not sure about the others on this list, but almost all veggie burgers in town that I've asked about contain egg as a binding agent and some have cheese in them too.

That's a bummer Bethany! I was told by a server when I ordered the burger that it was vegan. Oh well. You live and you learn. I never inquire about buns though ... I just take my chances since the only thing that's not vegan in some bread are dough conditioners used in minimal amounts.

All the other burgers on the list are definitely vegan though. Fuel's burger was created by their vegan chef. I once had Huey's read their ingredients to me over the phone to confirm, and the Trolley Stop's burger is vegan most of the time. But they change the recipe up from time to time, and I always ask to make sure it's vegan that day. Balewa's burger is raw and vegan. But I heard he's out of business now...

I'll have to try Fuels next time I'm craving a burger. Def bummed about eclectic's though. It's my fave by far.
I can't tell you how many times I get different info from different servers. Unless someone is veg themselves, they often say stuff is vegan when it's just vegetarian.

Im not sure of the days or hours yet, not posted by the door, though I noticed a building near the sears ower w/ Balewa's signs on it. Looks suspisciously like good things are in the works :)