With the chilly weather kicking in, all the vegan bloggers have been making creamy butternut squash soups. And well, if all the vegan bloggers jumped off a bridge, I probably would too. Okay, maybe I wouldn't go that far, but I did go so far as to make this spicy Orange & Chipotle-Kissed Butternut Squash Bisque from Vegan Planet: 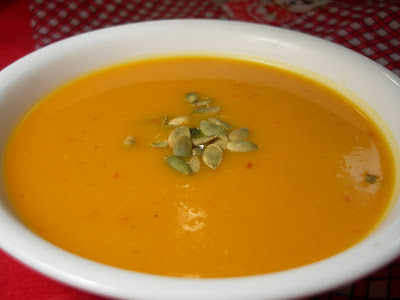 With only a few ingredients, this creamy autumn soup manages to tempt quite a few taste buds — namely the one that likes spicy stuff, the one that like citrus, and the one that loves tender winter squash. The squash is pureed with one chipotle pepper and a few tablespoons of frozen orange juice concentrate, as well as veggie broth. Those are pepitas sprinkled on top, by the way. The soup (paired with crusty Teese toast) was a perfect meal today since I'm a little on the sicky side. Stupid cold. My nose fells like it might fall off right now.

But woes aside, I've been tagged by Agnes of Agnes' World of Vegan Pleasures and Jennifer at Vegannifer to participate in a meme. So here goes.
Weird stuff about me:

1. My comfort food is Ramen noodles. Anytime I'm stressed, sad, or just need a bowl of comfort, I make Ramen. I usually buy it at Asian markets, where they tend to have more vegan flavors (and a lot of artificial meat flavors). Top Ramen Oriental is also vegan.

2. I used to eat sticks of butter. I was a fat kid because I ate lots of bad, bad stuff. I was also a big fan of the fat chunks on steak and bacon. I know this is disgusting. But I was like, 7 or 8 years old.

3. I'm kinda OCD. I plan out all my meals for the week and make little menu sheets. And I plan my grocery shopping trips up to a week in advance. Because I LOVE to make grocery lists! On the OCD thing, I also tend to lock my front door in the morning as I'm leaving for work, only to get in the car and freak out about how I may have left the hair straightener plugged in/the heater on/the back porch light on...then I have to go unlock the door and start all over again. Sometimes I even check twice.

4. My boyfriend Paul lives 3 1/2 hours away from me. We've been dating for four and a half years, but he's only lived far away for two of those years. I visit him twice a month, usually. He is not a vegetarian.

Here's Paul and a stray kitten that was hanging at my parents' house. 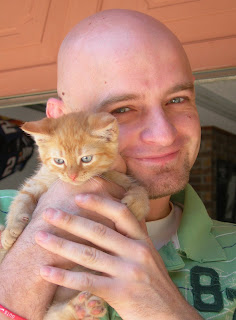 5. I LOVE John Waters films. Pink Flamingos is all-time favorite, but Female Trouble comes in a close second. And though it's one of his newer works, I totally *heart* A Dirty Shame.

6. I'm currently obsessed with those reality shows on TLC that feature people who have a million kids. There's Jon and Kate Plus 8 and 17 Kids and Counting. This is mostly due to the

fact that I only have 19 channels and not much to choose from. Also, the 17 Kids and Counting family is from Arkansas (my home state) and they're crazy radical Christian fundamentalists, which I find scary and somehow fascinating.

7. I think my next tattoo is going to be the "animal rights, human rights" logo, but I don't know where to put it on my body. Perhaps inside my left wrist? To match the Vegan tattoo on my right? What do ya'll think?

And yea, yea, I know I'm supposed to tag 7 people but this linking stuff takes forever! So I'm changing the rules! :-P
Posted by Bianca at 11:04 PM

My daughter and I went to see a "concert" by John Waters several years ago. It was the best 50 bucks I spent in a long time. He showed old snippets of long lost films, talked about his parents and how he got them into his movies and gave us fits of giggles for days. So glad I didn't take the sofa slug. He would have snored thru it all.

Hope you're feeling better! Soup usually helps. Woot for John Water's! For the new tat, I think the wrist is a great idea! I'm a firm believer in being able to see people's tats!

Love the facts!! I too am obsessed with making to-do lists, food-shopping lists, and more, haha :-D

haha I'm OCD about grocery lists too. I make a list of all the recipes I want to make and then make my meal plan for the week. I think it actually helps with groceries so I get the things that I need, not just want.


Your sick?! Oh no! Get better soon. What's really weird is that I haven't gotten sick since becoming vegan! No colds, flu, nothing. Another plus to being vegan.

We are creepily alike on 3, 5, 6, & 7! Whoa. I love John Waters as well (Desperate Living is my fave). I make menu lists and write the weekly items on a little chalkboard I made for my kitchen. I am nuttily weird about thinking I left stuff on. It takes forever to leave the house for a trip of any kind. And finally, I have VEGAN tattooed on my left inner wrist! Yay! I'm off to do my list.

we've got Vegan Planet, i think we're gonna have to try out that soup! it looks so delicious, Bianca! and i love the pumpkin seeds on top! yay! and teesey toast?! yes please! i hope you're feeling better soon!

my friend heather got me in to John Waters film - he's amazing! and his films make me laugh & feel squeamish! i love that about him! ramen, ramen, ramen! i love it, too! i even eat the stuff dry, right out of the package. i think i'm addicted. one would think i would have overdosed on it - eating so much in college and such - but i still love it! glad i'm not the only one feel'n the ramen love! :D hooray for OCD! gotta love those lists! ahahaa! yay! i always fear leaving the hair straightener on as well - and the dryer. even if i'm not doing laundry i still think the dryer's running - it's nuts. i'm funny about locks, too - and labels. all my stuff that i've got in the fridge or pantry has to have the label facing out. ;)

thanks for sharing, Bianca! oh yeah - and i think that would make for a sweet tat! anywhere peeps can see it would be best, i think! i agree with Shelly - being able to see tats is cool! i mean, why hide them, right?!

I love the orange twist you gave to your soup! What a great idea!

I'm so envious of your list-making talents. I only wish I could plan out a meal. I'm okay doing it one day in advance, but I have never been successful at planning out a week of meals. You may think it's OCD, but I call it begin a good organizer!

I LOVE MAKING GROCERY LISTS! its like the funnest thing in the world!!

a) i like making lists too, i just never finish anything on them

b)yay for wacky christians like the duggers! to quote a LOL i saw: "vagina...not a clown car."

c)your man is a cutie!

I seriously can't stop watching the Dugger family either. That darn TLC. I think they're on the way to 18.

And your soup looks awesome, too!

Fun to learn more about you! Cool lady, you are.

I have to try that soup. Vegan Planet has so many good recipes.

The soup looks beautiful; I must make that one! I too, am OCD. I check to make sure the door is locked at least 4 or 5 times. I also worry that I didn't unplug the iron, turn off the oven, put away the knives... Sigh... It simply means we are thorough human beings!

I totally used to snack on sticks of butter, too. :)

i used to be obsessed with ramen noodles!!!! my mom makes this amazing ramen noodle cole slaw using the oriental packets. i'm so glad it's vegan. i had no clue.

thanks for tagging me! i posted it all on my myspace blog instead of on my recipe blog. read number 1 and you'll know why. :)
my tag

i LOVE the possible tattoo..it's very strong, in an awesome way. my best friend is a tattoo addict (21 and counting) and has been trying to get me to get one for such a long time. i'll go one day when i get over my fear of pain...

i think the combo of the chipotle and the squash is something i need to try. i'm kinda addicted to spicy stuff right now so i think it's a necessity.

Thanks for the tip on vegan top ramen - I had no idea any existed!

I LOVE it that your comfort food is ramen - mine is too! If you ever get a chance, try Potato Noodle Soup by the Korean brand Nongshim. The front of the package says "Chewy Potato Noodle!" and lives up to its promise. These noodles have a great texture; to veganize them, I discard the powdered flavor packet and use 1 heaping T. of white miso instead, with fresh ginger & soy sauce. There's also a fun dehydrated veggie packet that is quite good. (if you Google image "Potato Noodle Soup" and you'll see what the package looks like for easier recognition)

Your soup is so orange and pretty! I didn't know soup could be pretty, but there ya have it!
I LOVE to make grocery lists too! And unfortunately we share the same OCD stuff, double and triple checking things.

That soup looks good. I need to share my 7 random facts too
FEEL BETTER

Wrist tattoos are so cool.

I was going to make this soup today, but I made one from Dreen's Everyday Vegan instead and now I'm wishing I had tried Vegan Planet's instead. Maybe later on this week...I have a lot of squash!

My hubby and I did the long distance thing while we were dating...it is tough. We could only take it for for 6-9 months before I moved closer to him.

I didn't know you're in a long-distance relationship! I'm in one too... 5 hours apart. but we've only been doing the long distance thing for 5 months and I have to say... it's pretty hard!

Lovely soup, you had me drooling at the name alone!

I love making grocery lists too! I waste way too much time at work doing menu planning and list-making.

I watch the kids show too. I sit in amazement and shock while watching them. I like the tattoo idea.

For a while, my favorite quick meal was ramen noodles minus the spice packet, but with cayenne pepper, Braggs, rice vinegar and sesame oil. So bad for you, but so good.

I saw John Waters walking down the street a couple months ago!

I love your weird facts. If I took the time to blog, maybe I would be tagged and I could answer such questions, but I don't blog. At least not nearly enough to keep up with you!