I'm back. After my unfortunate burglary incident, my parents loaned me one of their old digital cameras. But I left the next day to visit my boyfriend Paul in Clarksville, Tennessee from Wednesday through Sunday morning.

I was a nervous wreck about my house getting broken into again while I was away, but luckily my super friends Wes and Greg stopped by my place several times a day to hang with my cats (my dog was at a sitter's house). I also had a cop friend patrol the neighborhood while I was gone, and my dad installed security camras. Thankfully, the burglars stayed away. I also need to thank all ya'll for your supportive comments on my last post. You have no idea how much better they made me feel. Vegan bloggers are the BEST!

Though I was worried about burglars the whole time I was gone, I arrived home to a sweet surprise. Lindsay from Cooking for a Vegan Lover sent me a care package! The two of us are package swap partners, and my pack arrived way ahead of schedule (I still have one more thing to buy her before I can send hers ... but it's coming soon, Lindsay!). 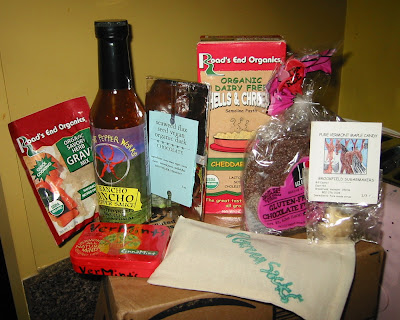 Thanks so much Lindsay! You have no idea how much this brightened my crappy week! I can't wait to sample all this awesomeness!

On the way home from Paul's this afternoon, I stopped by my friend Vaughan's for a Food Awareness Thanksgiving Feast! Food Awareness is our l0cal veggie society, and we get together before Thanksgiving every year. Sometimes we do potluck, but this year, the food was catered by Bastet, a local vegan chef from DejaVu Creole Soul Food & Vegetarian Restaurant. 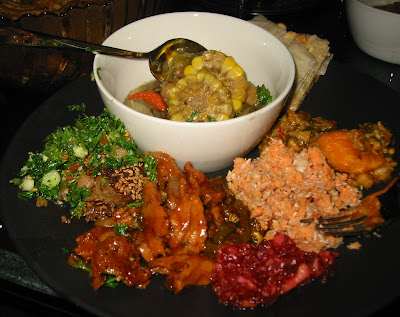 From left to right: Taboulleh, Falafel (it's hidden under the taboulleh), Barbecue Seitan (so good!), some kind of blueberry coconut raw spread (the purple stuff), raw sweet potatoes, a veggie stew concoction, and in the bowl, there's some tasty vegetable soup.

Hiding on the back of the plate was some non-vegan Baklava. Now, I thought it was vegan when I ate it because I assumed all the food was vegan (it typically is at our gatherings), but I later learned that someone picked it up from a Mediterranean restaurant. So it likely was not vegan. But it was in my belly when I learned, so I sucked it up. Next time I'll ask.

And finally, I made the Jerk Seitan with Coconut Quinoa last Tuesday before I left for vacation: 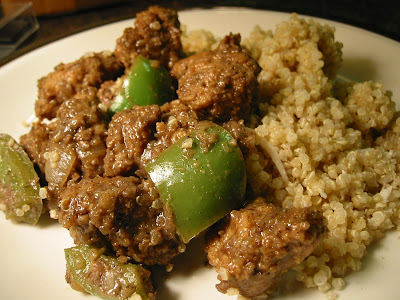 The jerk seitan recipe is from Vegan with a Vengeance and it's so amazing! Lots of ginger and allspice and other Jamaican flavors. My mom tried it and said the seitan tasted like real meat.

VwaV suggests serving the dish with coconut rice, but instead I made the Coconut Quinoa from Grub: Ideas for an Urban Organic Kitchen. It's a simple recipe involving coconut milk and shredded coconut, and the quinoa was a perfect complement to the seitan.
Posted by Bianca at 10:31 PM

I was thinking about you all weekend, Bianca. It's hard to feel like your home is "safe" after something like that. That being said, it sounds like you've made all the right decisions & it'll be just fine! I'm so glad you were able to receive some happy mail - that nearly always makes things better!

Bianca, I too have been thinking about you - I still can't believe what you had to endure, and it really makes me sad to think that ANYONE would rob someone.... sickening. Hang in there!!!

Thank goodness you had a lovely feast - hope everything else brightens up for you as well!! :-)

YAY! I am so excited your stuff came and that you like it all! You'll have to tell me how that seaweed chocolate bar is I haven't tried it yet. Enjoy!

I'm glad you are feeling better, I can't imagine what you are going through and just know you are in my thoughts =)

I am glad you feel better, too. I cannot imagine how you must have felt.
Wow, that's such a nice care package
and your thanksgiving plate looks so yummy.

So glad you got to spend some time with your boyfriend- I'm sure that helped a lot. Along with the security cameras, that's huge!

And awesome comfort food doesn't hurt either... here's to hoping they find your stuff soon!

Package swapping is such a cool idea! I just picked up some of that Road's End Organics Savory Herb Gravy for Thxgiving. Hope it's good! Your veg society dinner looks awesome! Definitely better than the one we had here in Houston on Saturday. I didn't even take photos!

Hi Bianca,
Glad to see you are back and that you got a cool care package to lift your spirits. I hope you can feel safe in your home again. It's awesome that you have so many friends and family to pitch in while you were away.

On a foodie note, I totally agree that the Vwav Jerk Seitan is a totally amazing recipe. So good. I haven't made it in a long time - thanks for the reminder!

I'm glad you were able to go on your trip and there be no more issues with your place. That is too cool of your friends to look after your place and kitties like that.

bianca, i'm glad yer back with a camera! that food looks hella good. how do i get on a care package exchange? that would be pretty awesome. btw, i've given you a cheezy butterfly award because i really like your blog. see my blog for details.

YAY for some cheering up goodies! And YAY for a yummy Thanksgiving Feast!

I love the jerk seitan from VWAV. It is freakin' awesome. The cheese I used on the enchiladas is veganrella. I set the oven on broil, so it would melt the hell out of it.

I'm glad to hear you had no more mishaps when you were gone!

Hey, thanks for the comments :]
everything looks absolutely delicious! I'm pretty jealous. I'm glad your friend Lindsey cheered you up, and your house was relatively protected :]

Glad you're hanging in there--and what a great piece of mail to come home to! Everything looks terrific. And that jerk seitan--oh, wow! I wish, wish I could eat wheat!!

Lindsay is too sweet! look at all the glorious goodies! yummah! :)

that's very cool on people to keep an eye on your place while you were gone. very awesome, indeed! don't you just love how considerate & rock'n people are! makes me so happyfaced! :)

good to see you're back. The thanksgiving spread looks so good, and the tempeh and quinoa is my kind of food - coconut and jerk spices are the perfect combo.