Though I usually go totally raw for my monthly day-long raw food cleanse, I called today a "high raw" day since I cheated a little bit at lunch with this delicious Live Burger from Bawala's Vegan Gourmet, a new semi-raw cafe inside the Smooth Moves smoothie shop in Midtown: 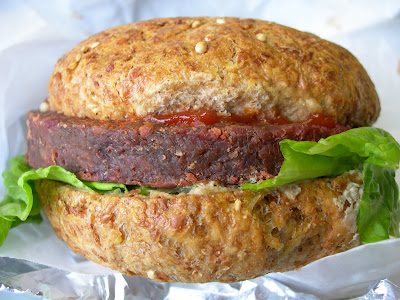 I've been hearing about these raw burger patties for a few months now, and I'd been waiting until raw day to give them a try. Balwala (who's name I'm probably spelling wrong) wouldn't tell me what was in his live patty (says he's planning a patent), but he assured me the burger part was indeed raw. He did say it contained lots of dehydrated veggies, as well as walnuts and flax seed.

Unfortunately, I didn't realize the patty was served on bread until Balwala was putting it together. It's sprouted grain Ezekiel bread though, so I figure that's okay. He also added ketchup and mustard, which aren't really raw either ... but I was already cheating with the bread, so... anyway, it was delicious and I can't wait to try the raw barbecue portabella sandwich next! 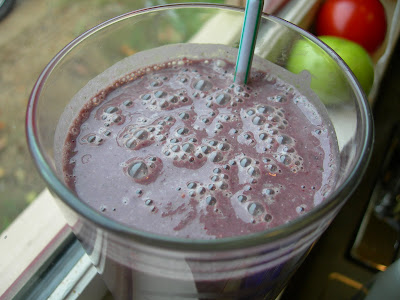 I called it "Not Green" because it was supposed to be green since I added spinach. But apparently purple trumps green since the frozen blackberries dominated the look of this creamy breakfast. Also in the smoothie — frozen banana, juice of one orange, a couple dates, 1/4 cup hemp seeds, and 1/4 cup raw oats.

For dinner, I had another Raw Buckwheat Pizza using the dehydrated crackers my friend Judith made me for my birthday: 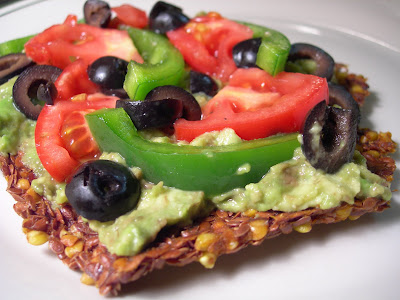 This time I added mashed avocado, tomato, bell pepper, and olives. Does anyone know if olives are raw?

I served the pizza with this Salad of Baby Greens, Radishes, Carrots, and Black Grapes and drizzled with a Tahini Lemon Dressing from Raw Food Made Easy: 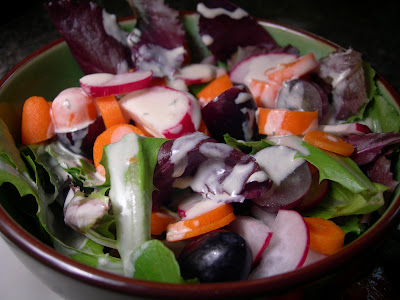 Finally, I made one of the tastiest raw desserts I've ever had — Raw Brownies: 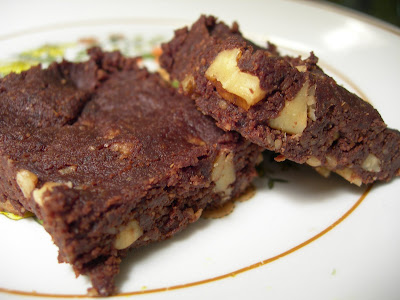 These Raw Brownies (also from Jennifer Cornbleet's Raw Food Made Easy) had a base of walnut, dates, and cocoa powder. They're really rich, and I enjoyed them crumbled in a bowl with sliced bananas.
Posted by Bianca at 11:33 PM

Yay for high raw days! It's okay that you cheated, it's ezekiel bread which is like the healthiest bread ever! haha and that burger looks amazing.


I always mix berries with spinach and it seems that the purple and the green are always fighting for top spot...and then it turns into this awful brown color =P Yummy!

those brownies look so good! And the cafe sounds like a cool place.

You know, I was thinking about making those browines...I think I'm gonna now!
I've been too much of a pixie-princess to do my weekly raw days - it's just too darn cold outside (here)! I'm wanting your food, though!

That raw burger looks really good. Actually it all looks good. I try to incorporate raw food into my diet, but I've always imagined being painfully hungry if I were to have a "raw day", but looking at what you eat on your raw days, I think I could do it. That raw pizza looks really good, and the tahini dressing sounds great!

i need to get over my fears and just do it. i hesitate because a) raw food scares me and b) it's getting cold outside and raw food doesn't sound good.

Good job on the high-raw day! Hopefully you can start eating more and more raw if you'd like to. Olives in general are not raw, as they are heated and jarred, but you can find raw ones here and there at specialty shops from special raw companies.

Also, I tagged you for a meme. Details are on my site. If you participate or not - it's cool either way!

For the Love of Guava said...

mmm... I've been meaning to try a raw day but haven't quite gotten there yet... those pictures are pretty motivating though!! YUM!

need some raw brownies for sure...
i want to experiment more with non-baked desserts.. that sounds like a good idea to me!

That pizza looks so good! I love avocado on anything.

That burger looks good too.

It doesn't sound you missed your cooked food! I wouldn't mind trying a 'raw brownie day'... ;)

i am addicted to raw brownies!!! i've been eating brownies like crazy lately. i don't even think i could stomach one anymore haha today's my first brownie-free day in like a week.

that burger looks soo good. there's no fun cafes like that around me. pittsburgh sucks haha

Wow...I haven't had a raw day in ages. In fact, I have been pretty bad when it comes to indulging in too much unhealthy stuff.


Guess I ought to get back on the wagon. If I had raw food like that everyday, I'd bet set.

The pizza and brownies look like pretty good arguments for eating raw more often - I need to check out the cookbook with the brownie recipe. That smoothie is impressive too.

I've heard great things about those raw brownies. I should make those soon since I recently bought that book. All the raw food looks very appetizing!

I'm enjoying raw food all the time for bout three months now and LoVinG everything!!! It's chilly here too and I'm not missing anything =)) !! it IS POSSIBLE REALLY!!!

Really delicious-looking day! That burger patty looks like one I had in San Francisco that was mainly made up of beets. SO AWESOME.

YRM! Everything looks drool-worthy despite its rawness. And I like that term "high raw"- it sounds western, like "high noon" or something.

that's one tasty look'n raw burger! oooooooo! the bbq portobello raw sammie sounds awesome, too! report back if you try that one soon! yay! ezekiel is sooo good though - i love their sprouted pasta.

i love your "Not Green" Green Smoothie - it sounds super yummy! the salad and the buckwheat pizza are both make'n me hungry! and the raw brownies - oh man, those sounds glorious! especially crumbled with slices of bananas! yay!

oh thats ok!!!!! i was looking forward to meeting the real you too!!! its all good though :) your raw day looks delishhh...im jealous

I am seriously considering to go raw now. All the food looks so good, especially the burger and those brownies.