Oh my gosh, y'all don't know how hard it is for me to choose a favorite cookbook. I have so many cookbooks, and I have a whole handful of favorites. I think, for years, I'd have said Vegan with a Vengeance was my fave. And it's definitely still in the top five. But if you're gonna make me pick just one now, I think I'll have to go with Isa Does It. 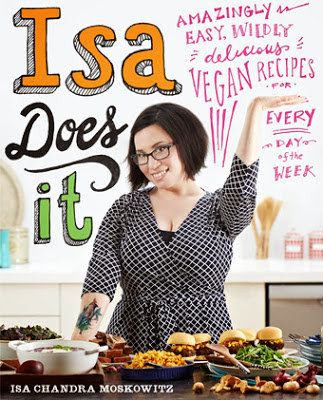 I love all of Isa Chandra Moskowitz and Terry Hope Romero's cookbooks, but Isa Does It tops the list for a couple of reasons: 1) It's gorgeous (hard-cover, full-color photos of every recipe, great graphic design), and 2) The recipes are for whole foods-based meals that are super-healthy without pretension. I feel like so many books or cookbook authors who focus on whole foods tend to do so with an air of "fake is bad, whole is good."

Isa doesn't use plant meats but instead relies on tofu, tempeh, and seitan. But she does so in a way that doesn't make people feel bad for eating more processed plant meats. Does that make any sense? Like, I love the hell out of some plant meats, and, in a limited capacity, and I use them in my cookbook, Cookin' Crunk. My next book, which I'm working on now, will also include a few recipes using plant meats. But I'm all about everything in moderation, and Isa Does It helps me create whole foods meals that feel decadent. I may have a packaged veggie burger or hot dog for lunch, and when I do, I want a bean- or tofu-based dinner. Get it?

Anyway, everything I've made from this book has been beautiful and delicious. In fact, one of the most lovely dishes I've ever made was from Isa Does It. I mean, just look at this Mushroom Hotpot! 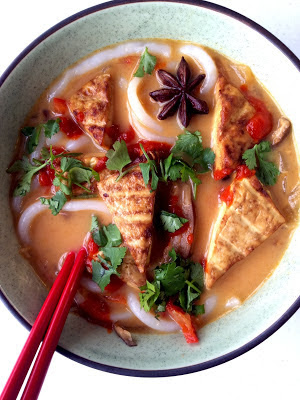 For some reason, I'm really drawn to the chickpea recipes in this book. These Scrambled Chickpeas with a miso-tahini sauce were the first dish I tried. Such a wholesome and satisfying breakfast! 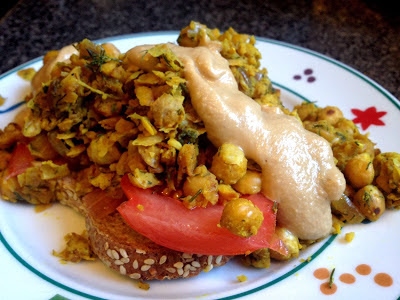 Just this week, I made Isa's Chicky Tuna Salad Sandwiches. By far, the best chickpea tuna I've ever had. This is loaded with veggies — carrots, celery, onions — and it's made fishy with a touch of dulse flakes. I used a little less than the recipe called for because I don't like an overly fishy taste. 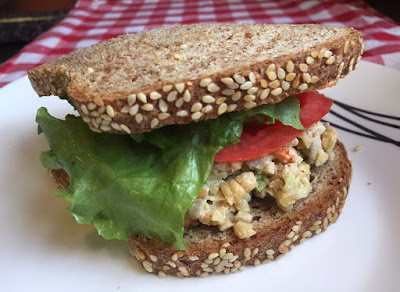 Other favorite cookbooks: Hearty Vegan Meals for Monster Appetites, Veganomicon, Vegan Brunch, Eat Like You Give a Damn, How It All Vegan, Vegan with a Vengeance, Betty Goes Vegan,  and Teff Love!
Posted by Bianca at 4:52 PM

Isa Does It is a beautiful book. I was tempted to choose it too went with Vengeance in the end. I must try that chickpea tuna.

one of my faves too, the pictures are stunning and the whole look and feel of the book is gorgeous.

This is such a beautiful book. And I know exactly what you mean about the plant based meats and some other people trying to make you feel bad for including them in your diet. None of that from Isa!
That chickpea salad sounds delicious, I think that will be the next one from this book for me.

I know!! It's crazy hard to have to pick a favorite book. I've been cooking a lot from IDI lately and absolutely loving everything I make. I'm not sure why it took me a while to get into it. And for the record, I am a super fan of all things meaty - homemade or store bought, processed or tofu, or whatever. I'm in! <3

I agree about the above it all attitude of some of the healthier cookbooks. I chose Veganomicon as mine, but it's really hard to pick one favorite! The chickpea scramble looks amazing. I have yet to try a scramble made with something other than tofu!

I love Terry Hope Romeo's Viva Vegan! Every recipe has been just awesome.