Forget the food. Let's talk about brew. I'm a bit of a beer snob these days. No Bud Light or Coors for me. No way. I want a delicious craft brew (but I can get down with a PBR every now and again).

But let's back up a bit. Back in April, my BFF Greg and I went to the Memphis Brewfest at AutoZone Park. We tried tons of beers, but one really stood out for me. When I got my cup at the German beer table, the lady behind the table warned me that the beer I was about to drink tasted like meat. Meat? Yep, meat. Seeing that it was beer and not meat, I said why not?

One drink and I was in love. The heavy dark beer tasted like it had been spiked with Liquid Smoke. If you're not a dark beer fan, that might gross you out. But I like my beers dark, bitter, and somewhat reminiscent of black coffee. I didn't catch the name of my beloved German beer that night, but I'll never forget the flavor. 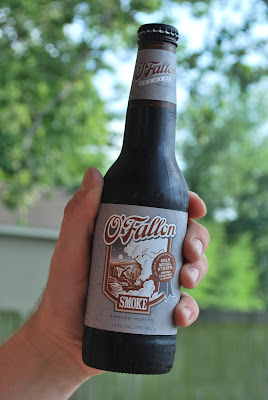 This is not my hand, by the way. My wrists are NOT that hairy!

This isn't quite as smoky as the mysterious German beer I sampled at Brewfest. But it's close. Imagine Samuel Smith's Taddy Porter spiked with Liquid Smoke. Oh yea. Either that sounds delicious to you or it doesn't. But I don't care. This is my new fave beer. O'Fallon is brewed in O'Falllon, Missouri, by the way. And for the record, it's vegan. I checked. For a full list of vegan beers, check out Barnivore's vegan beer and wine guide. 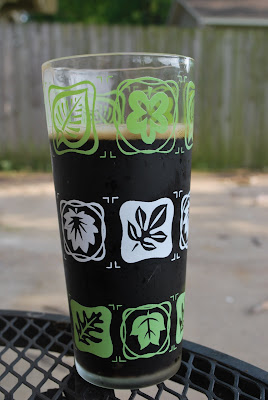 I found this stuff in Clarksville, a town about three and a half hours from Memphis, last weekend. They have this great beer shop called House of Brews. Though Clarksville is much smaller than Memphis, their beer shop is far, far superior to anything we have here. I'm pretty sure O'Fallon isn't available here. Sigh. Guess I'll have to wait until the next trip to Clarksville.
Posted by Bianca at 10:52 PM

I've been digging dark beers lately, too--chocolately, coffee-esque is where it's at--and that added smoky element sounds so intriguing! I'll have to keep my eyes out for this one.

Just wanted to add that in there.

I don't drink, but you make me want to! The way you describe that beer is making me drool. I love anything smoky and dark, so this sounds perfect. Lovely photos!

Also, a quick plug for www.barnivore.com for all your is-this-beer-vegan needs.

i respect everyone's choices, but after giving up beer completely only a week ago i am happy to say i had no cravings from reading or looking at the pics :D

also, porters aren't summer beers up here, they're winter beers so you don't really see them getting drank in da Burgh til around November...

Hmm never seen this... might have to try to pick some up. If you haven't tried Aecht Schlenkerla Rauchbier Märzen you need to! Its one of the best smokey beers imo. Also if you can find it Nogne O Sunturnbrew, an excellent smoked-barleywine (that might be harder to come by though.)

Smoky beer - interesting! Never thought of it. Mind you I'm more of a lager kind of gal.

Too bad you have to go so far to find a good beer store! I was at the Beer Cave in Millington (small selection, and the interesting bottles had dust on them) and the girl at the checkout mentioned that the organic oatmeal stout I selected was the only healthy thing she likes.

It looks like O'Fallon Brewery has a TN distributor, so it might be worth contacting them and asking if they sell to any stores in Memphis. Good luck

Alaskan's Smoked Porter is delicious too! I didn't think I'd like it, but it definitely has something that makes you come back for more. I don't know if you guys get Alaskan over there, but everything I've had from them has been good.

hmmm...never had dark beer. Actually I just stared drinking beer, but not very often. Usually only on grilling nights. My fav is Corona with lime...yum. I will have to try a dark sometime though.

I have had their pumpkin beer, which is THE BEST pumpkin beer I've ever had. I think I could totally get into the Smoke Porter, will try!

I'd be on the floor after one of those!

I'm not a big beer fan but that actually sounds good, as I do like black coffee ;-)

Barnivore is an awesome website! I check wines on there all the time. It's sad how many brands aren't vegan friendly.

Oh man, I'm a dark beer fan, too. Not sure I've had any with liquid smoke, but now I'm intrigued. Have you ever had Xingu?

Awesome! I'm a beer girl myself (some say it's snobbery, I say it's good taste, lol). I love microbrews and I see O'Fallon around a lot. I should definitely give it a try.

Sounds pretty good, I like them dark too but have been drinking a lot of IPAs this summer so far.
Just a question - would you still drink your favorite beers if they weren't vegan? Luckily a lot of my favorites just happen to be but it took me a long time before I could give up car bombs and Guinness

I am not much of a beer fan , but I think my BF would like this one ;) Thanks for sharing.

Not much of a beer drinker, but it's no surprise this brew is made in Wisconsin. We have 6 bars within a 20 mile radius of our little Wisconsin town that boasts less than 900 folk! (The town, not the bars...lol!)

Yes...Rauchbier is probably what you had. We call it a bologna sandwich beer :) I love my beer too! And actually, i think O'Fallon is from just outside St. Louis, MO. When I was out there last, i had to try some (I always try to sample local brews). I had their Wheach, which I absolutely loved! It's a peach wheat. I brought a bunch home, but hadn't seen it since...until last week! I found a 6 pack and now I'm happy again!Will have to try their Smoked Porter next time, thanks :)

Woohoo heady vegan beer! I once heard a rumor that Guiness has meat juice in it...

I am in LOVE with your site!
Thank you!

You should try Alaskan Smoked Porter. You may be able to special order it. But it has that deep, dark liquid smoke flavor. It's delicious!!

This isn't brewed in Missouri? I thought all their beers were brewed in O'Fallon.

By the way, if you ever get a chance to tour their facilities, it's a lot of fun and very private.

Sadly house of brews closed down! I live in Clarksville, and now you'd have to go to Nashville to find a decent beer-snobbish brew.