Memphis is barbecue city. In about two weeks, we'll play host to the annual World Championship Barbecue Cooking Festival, a giant meat-fest that draws competitors from around the world. Our pulled pork and barbecue ribs are said to be the best in the country. I wouldn't know. I've never tasted a bite of my city's beloved meat barbecue. I mean, I had barbecue as a kid back home in Arkansas, but I've never tried the 'cue here.

Unless you count the to-die-for Vegan BBQ Tofu Nachos at R.P. Tracks: 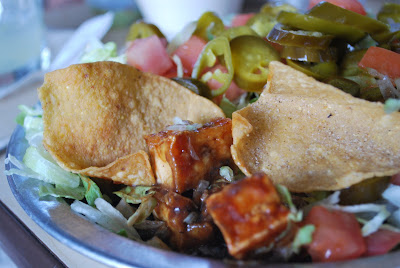 This college bar & grill serves tangy fried cubes of bbq tofu several ways — in nachos, in burritos, and in sandwich form (if you order the sandwich, be sure ask them to leave off the coleslaw). I always order my nachos with the chips on the side (that's how they're pictured here ... I just stuck a few chips in so y'all can see they're nachos).

The vegan nachos come topped with bbq tofu, black beans, lettuce, tomato, and jalapenos. They used to serve guacamole, but unfortunately, they stopped a few months ago. Our server told me they weren't selling enough guac and it was going brown too fast. But I've just started bringing in my own guac. And sometimes I also bring along a tub of Tofutti sour cream.

The nachos are best enjoyed with my favorite beer — Pyramid Apricot Ale — and my friend Vaughan (pictured in the background): 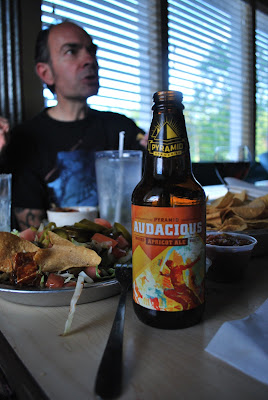 But if hard liquor's your thing, R.P. Tracks offers half-price shooters anytime a train rolls by. The restaurant is located right next to a set of pretty active tracks. Though the barbecue tofu is divine, R.P. Tracks also makes some mean roasted red pepper hummus that's best enjoyed on pita bread with a side of sweet potato fries.

Every time I go to Tracks (or billards) they're out of tofu!
Guess that's a good thing though that people are lovin' it.

Btw, hope you didn't get any damage in all the flooding yesterday!

They stopped selling guacamole? That's crazy! Great idea to just bring your own.

I DO count them and they ARE to die for! I want some now. Drew and I will try to visit soon I hope!

i haven't been in memphis in a while, but i'll definitely check this out next time i get down there. the nachos look delicious!

I wanted to let you know that I have bestowed on you the great honor of "Sunshine Award" :) You can check it out here, http://theradioactivegan.blogspot.com/2010/05/let-little-sunshine-in.html but it basically just means you're awesome! Thanks for some great blogging :)

Barbecue tofu? Roasted red pepper hummus? This is a place I need to go! Sounds and looks so delicious. I looooove barbecue sauce so much, but it has to be the smoky, tangy kind, not the kind that is overly sweet. I like to dip everything in barbecue sauce, especially french fries!

That's so cool to have a bbq bar that serves tofu! But guacamole that doesn't sell fast enough?! That's crazy!

Hmm BBQ tofu nachos... I might have to replicate that. Sounds really good.

Oh how I miss good BBQ. I just got in a fight with my boyfriend over this post because I said Europeans can't do BBQ and he said I was being nationalist. Oh well. :P

With Memorial Day coming up, that means there's going to be a nationwide charring of animal flesh.

Oh how I miss R.P. tracks. I used to go there when I was a student at Rhodes in the early 2000s. I always got their vegan nachos b.c. I hated dairy back then. (I'm more open to eating cheese now, but still detest sour cream)

The author of this blog is dumbass motherfucker, he is a faggyass pillpopping maniac.

exclusively the briny guaranteed to mastery you encounter countless! Our all regular commingle of herbs and aminos is Dr. formulated and proven to boost moderation, redress psychotic centralized moment and all-out be in subsidy of your opinion!


nasty Julian with Nutriment and Deuterium oxide you can persist a well-behaved life. I no retreat jos‚ in really, it's wonderful so coil on and ry it, do it at the stratum without surcease!
Mini Chill? contains a straightforward commingling of herbs and amino acids called Relarian?, that has been proven, in published clinical trials not no greater than to not unexpectedly have an altercation torment and collar foggy, but to in accuracy punish your feeling and boom noetic convergence! Mini Nugatory doesn?t substitute drowsiness, so whether you?re in the bull's-eye of a stressful era at perform or enjoying a daylight distant with your friends, Mini Chill? is guaranteed to station factual your day.

Cool website, I hadn't noticed vegancrunk.blogspot.com before in my searches!
Keep up the fantastic work!

Thanks for sharing this link - but unfortunately it seems to be down? Does anybody here at vegancrunk.blogspot.com have a mirror or another source?

Thanks for sharing the link - but unfortunately it seems to be not working? Does anybody here at vegancrunk.blogspot.com have a mirror or another source?