We just returned from our 9th annual Bonnaroo Music & Arts Fest in Manchester, Tennessee (it was actually the 16th year for the festival, but we've been going since 2010). 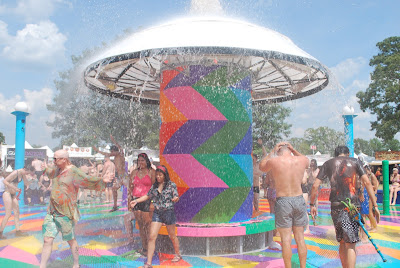 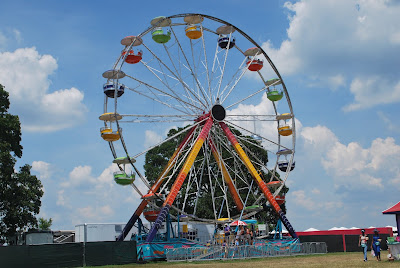 This massive 4-day music/camping fest typically hosts about 50,000 to 80,000 guests, so as you might imagine, there are always plenty of vegan options!

Here's a rundown of the food I purchased inside Centeroo (the fest grounds). Plus, some highlight pics! Tomorrow, I'll post my campsite meals.

My very favorite meal of the weekend was this bowl of Vegan Cactus Hugger Tots from the Super Tot food truck! These were available with vegan cheese, plus salsa and guac. You can never, ever go wrong with tots. They had another vegan tot option (with nooch and vegan aioli) that I wanted to go back for but never made it over there again. 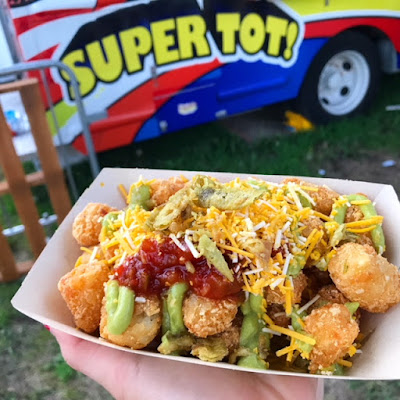 Paul and I don't usually venture into the general camping grounds since we stay in the guest camping area (for media and artists), but this year, we ran the Roo Run 5K, which took us on a tour of the massive general campgrounds. They have food vendors out there too, and I spotted this vegan food stand called The Beet Box. 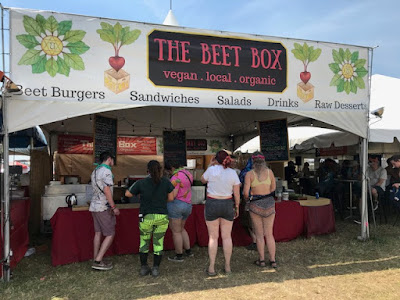 Check out the menu!! 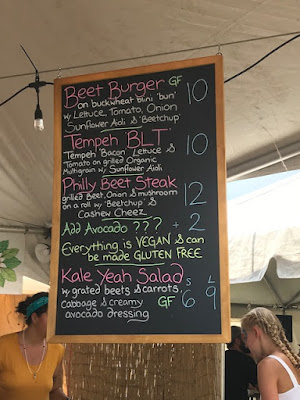 I went with the Philly Beet Steak, and it was SO FREAKING DELICIOUS. I'm definitely re-creating this at home very soon (and when I do, I'll share the recipe!). It had grilled beets, onion & mushrooms on a hoagie bun with beet ketchup, cashew cheese, & avocado. 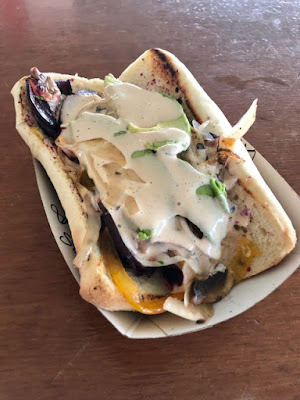 We have a few Bonnaroo food traditions that we eat every year, and one of those is Yuca Fries. I've had plenty of yuca fries in my day, and let me tell ya — the yuca at Bonnaroo is the very best. This time, I had them sub out guac for the aioli that comes with them. They were a little stingy with the guac though! 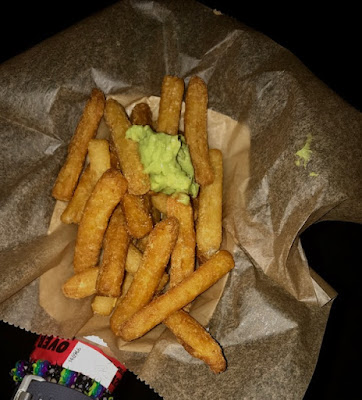 Right next to the yuca fries booth, there's a noodle stand, and most years, either Paul or I order the Veggie Noodle Bowl. This year, Paul ordered it, but they've switched from a teriyaki sauce to a peanut sauce, and Paul didn't like them. So I finished off most of this bowl. Still good, but the teriyaki sauce was better. Sorry for the crappy pic, but it was late and dark! 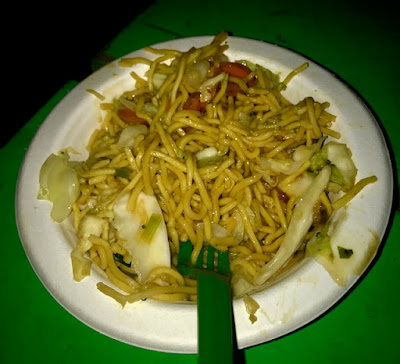 Another tradition that I've maintained for the entire nine years of our Roo visits are late-night Samosas! Nothing beats a hot, fried potato-pea fritter with chutney when you get the beer munchies at midnight. 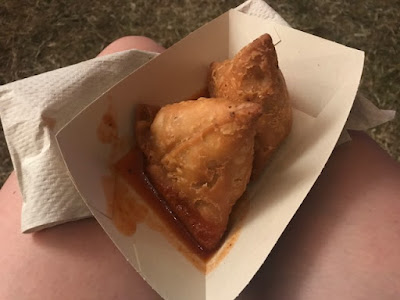 Bonnaroo is located in the very tiny town of Manchester, Tennessee, where outside-the-fest food choices are limited to chain restaurants, like Taco Bell and Waffle House. Some years, we venture outside the festival to sit in an air-conditioned restaurant. This time, our friends Shara and Mary arrived mid-way through the fest (they only wanted to hear bands that were playing on Saturday), and they were craving Waffle House. So we hit them up for breakfast on Sunday. Did you know Waffle House's hash browns are vegan? Yep, so long as you're okay with the shared griddle (I'm fine with that). They use a vegetable shortening to fry with. I got mine scattered, diced, and peppered. With black coffee of course! 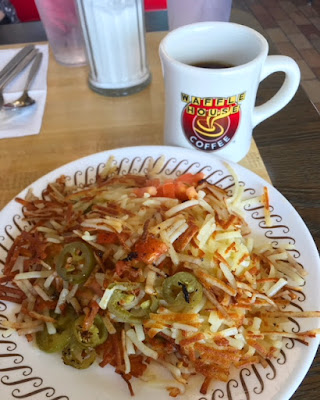 That's all for the food I purchased. I tried to go easy on the spending this year since I just bought a new car. But I'll share my money-saving campsite meals tomorrow!

Until then, here are a few highlights from the fest! Paul snapped this great picture of Paramore on Saturday! We get media access since we freelance for The Memphis Flyer, so these pics were taken from the photo pit. 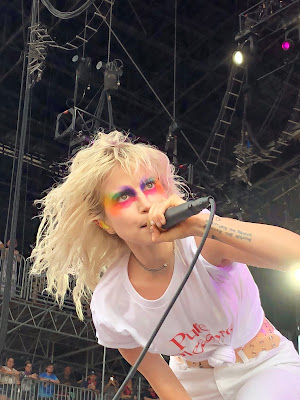 And I caught this image of Sheryl Crow. She was great! She played almost exclusively older songs that we knew all the words to. 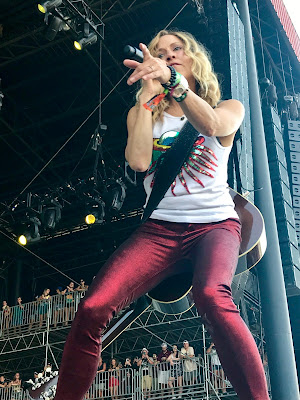 The musical highlight for both us though was The Glitch Mob. They played a killer set! 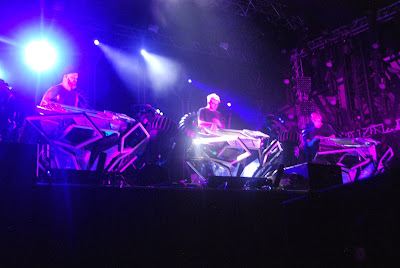 On Friday morning, we got up early and went to yoga. There are free yoga classes every morning at Roo! Paul tried yoga for the first time! And on Saturday morning, we ran the Roo Run 5K. This is the sixth year for the 5K, and I've wanted to sign up every year. But it often sells out, or I just forget until it's too late. This year we were on our game! This 3.1-mile route took us on a tour through the general campgrounds, and there was pretty much no shade in sight. And it was about 90 degrees! Good thing we're acclimated to hot outdoor runs in the South! 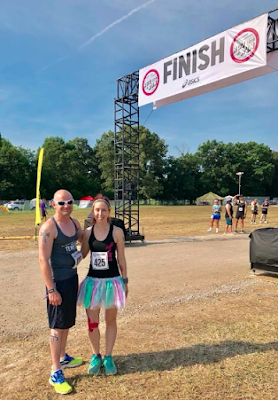 Other highlights included Eminem (but the crowd was insane, and we couldn't get close enough to see anything), The War & Treaty, Mavis Staples, a booth of cheap crystals ($5 for giant chunks of amethyst & rose quartz!). See y'all tomorrow! 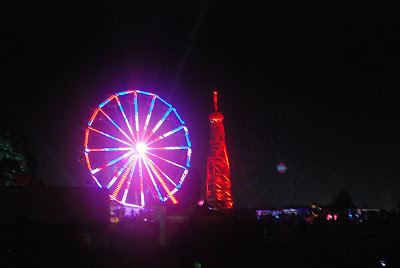 That tiny blob of guacamole on the yuca fries is so sad! The fries look really fabulous though.
I could be very into a big plate of hash browns like that..... never been to a waffle house actually.
Those musical acts are such a great lineup!
Ttrockwood

The Philly Beet Steak looks amazing!!!! That would have been my pick as well.
Also, the smallest and saddest blob of guac ever.

What a fun post! I loooooooove yucca fries but I have to agree and say what a sad blob of guac. That's barely a tablespoon! The tots look pretty awesome as well and those noodles! Really awesome pics from the media pit and how cool that you got to run a quick race while you where there too! Sounds like such a fun time!