What I Ate at My Campsite at Imagine Music Festival

As I mentioned in yesterday's post, Paul and I just returned from Imagine Music Festival in Atlanta. It's a multi-day EDM festival with camping! From Thursday night to Monday morning, we spent our days at our makeshift home on the campgrounds at Atlanta Motor Speedway, where the fest was held. The racetrack was converted into a giant rave for the weekend with DJs Tiesto, NGHTMARE, Buku, Datsik, Seven Lions, Dieselboy, Above & Beyond, Pretty Lights, Big Gigantic, and so many more.

Yesterday, I shared pics of the amazing vegan food I found inside the festival grounds, which was in the center of the giant racetrack. There were so many great meatless options inside, but on the campgrounds, there were only four food vendors with only two vegan options between them. I did try one of those vegan options (see my Hot Vegan Balls from yesterday's post). But I spent most of my days eating the food that I brought with me. Here's a pic of Paul and I at our campsite! Yes, I'm wearing glitter horns! 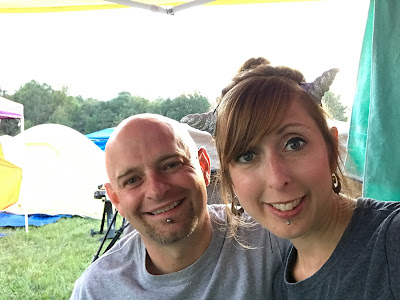 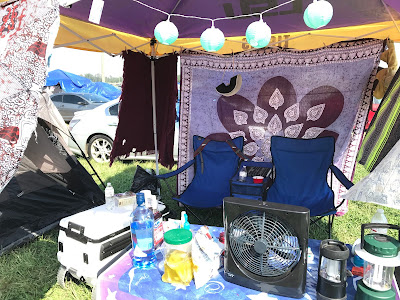 I always pack lots of oat cups and soup cups for camping fests. I always bring a camp stove and pot for boiling water. Even the festivals with great vegan options near camp can be costly if you're buying food for every meal. Since I wasn't sure what to expect from Imagine (it was our first year), I brought WAY too much food. And I'm grateful for that because it came in handy.

I started most mornings with an oat cup and a single-serve pack of nut butter, like this Mixed Berry Oat Cup with ProBar Superfood Almond Butter. 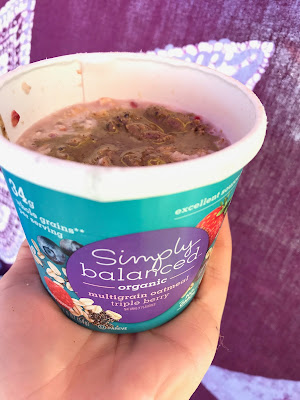 And this Chai Spice Oat Cup with Nuttzo nut butter. 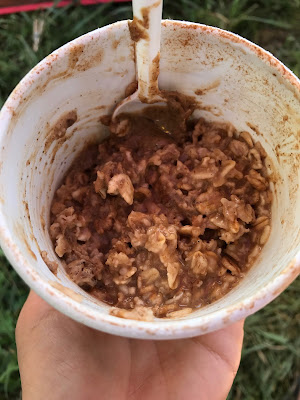 On Saturday morning, I even logged three miles around the outskirts of the speedway after downing one of those oat cups.

Lunches were usually Veggie Dogs with mustard. Excuse the terrible-looking mustard job here! I brought a pack of eight veggie dogs and managed to go through the whole thing. I did share a few with our friends though. 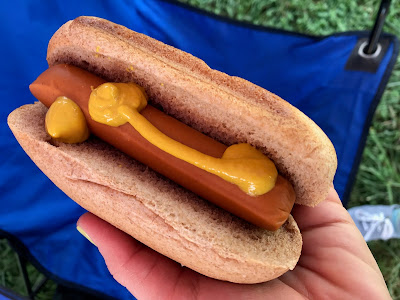 I brought a few soup cups, like this Green Chile and White Bean Soup. Good stuff! 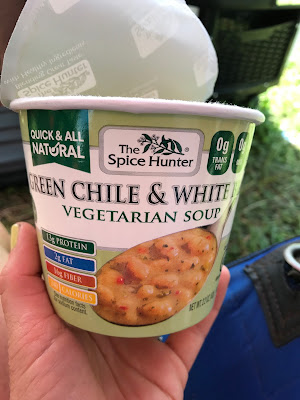 I also had lots of ramen cups, like this Mike's Mighty Good Craft Ramen. This stuff was amazing! 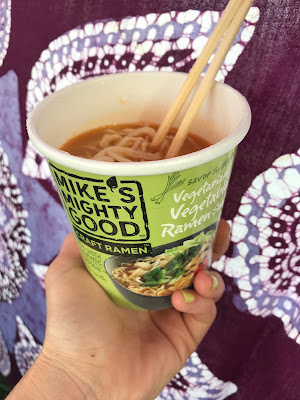 This Dr. McDougall's Miso Ramen made a great breakfast before packing up camp on Monday morning. 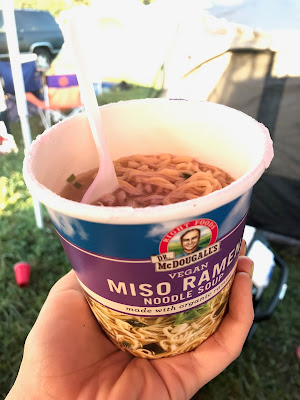 Our friends Thrasher and Erin camped next to us, and they brought ramen too. Here's Thrasher enjoying some pre-show ramen before heading into the fest. 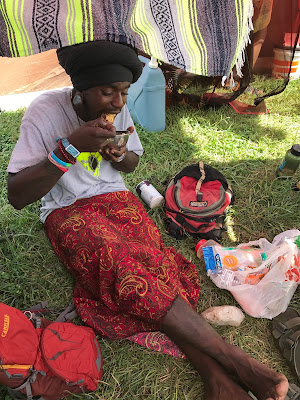 Also, not pictured, I ate lots of hummus and baby carrots. And chips! So many chips!

Typically, when we go to Bonnaroo, I bring instant coffee powder and add it to boiled water. But this time, I brought a bottle of cold brew and some single-serve bottles of Silk Vanilla Almond Milk so I could have iced coffee! Really hit the spot in those 85-degree mornings. Your tent gets super-hot inside by 7 or 8 am, as the sun bears down, and nothing beats a cold coffee. 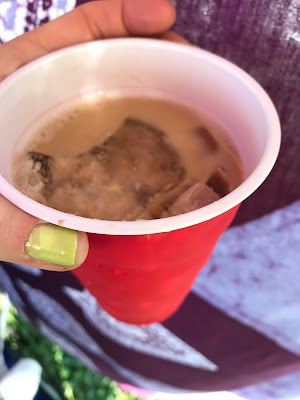 The fest grounds (and live music!) didn't start until 5 pm, but throughout the days, there were free yoga and mediation workshops. I went to one on connecting to our deeper selves. It involved a guided meditation led by this lovely lady! 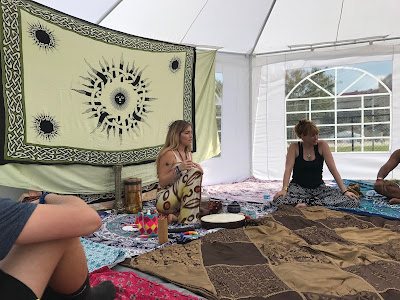 And I went to a didergerdoo meditation that blew my mind. This guy played the didergerdoo over our chakras as we laid in savasana. I walked by his second class that day and snapped this pic since I couldn't get one during my own meditation. 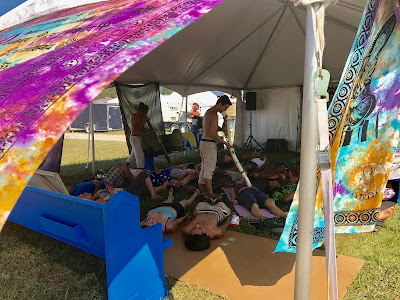 Although the real fun (and the great vegan options) were inside the fest grounds, which didn't open until 5 pm, we had a pretty good time at the campsite with lots of snacks, a little downtime for reading, and plenty of beer and Bloody Marys. Camping takes a lot out of you, but it's such fun!
Posted by Bianca at 10:00 PM

Those dr mc dougall cups are the best!! A while back i found a crazy sale on the quinoa cups and bought a cazy ton of them for when i travel for work or just need a tasty instant meal, the black bean one and the sweetest potato one are my favorites
http://shop.rightfoods.com/Quinoa-Salads/c/DrMcDougalls@Salads

What a brilliant idea to bring cold brew! Looks like a delicious and fun long weekend :)
Ttrockwood

Now I get why you found the food truck situation crummy. There seems to be a lot of camping time! When I hear about these music fests I just assume it is almost 24/7 music lol. Or more daytime jams at least!