There's a new vegan magazine in town, y'all! My online buds Holly Feral and Michele Truty (yes, the esteemed Vida Vegan Con organizer) are part of a team of vegan journalists and photographers behind a brand-spanking-new vegan glossy mag. It's called Driftwood Magazine, and it's all about vegan travel and culture. And issue number one is hitting stands this month! 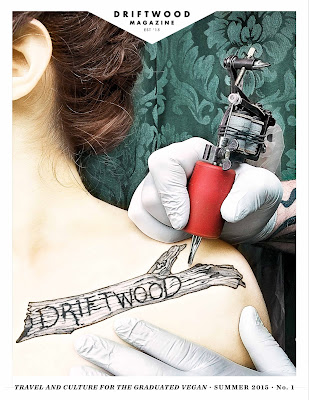 I was sent an early digital review copy, and I was so impressed that I immediately placed my order to have the print edition mailed to my house. It's a quarterly mag, so there are just four issues a year. And they're printed on thick, coated, recycled paper, so it's the kind of mag you store on your bookshelf. Of course, you can also order digital copies if you're into that. Personally, I like to hold a magazine in my hands. But I'm old, so ...

Here's a sneak peek at the first issue.

Seriously, it's a gorgeous publication. Print issues are kinda pricey at $14 per pop, but the magazine is loaded with good stuff. And it's a keeper, the sort of digest you want to treasure forever and ever. Plus, you're supporting vegan business! But if you're into digital mags, the internet version is just $5! You can order by the issue or subscribe on the Driftwood website. And soon, you'll be able find print issues at Herbivore, Nooch, and Vegan Essentials.

Additionally, Driftwood is looking for contributions for upcoming issues. Details can be found here.
Posted by Bianca at 10:00 PM