Our Memphis veggie group, Food Awareness, held our second annual Memphis Vegan Bake Sale this past Friday night. Our sale is in conjunction with the Worldwide Vegan Bake Sale, and ours always benefits the Memphis & Shelby County Humane Society.

Grawemeyer's, a German-American restaurant on South Main, graciously let us use the space in front of their shop again this year. Our sale took place during the monthly South Main Art Trolley Tour, when art galleries along South Main (one of the city's art districts) have openings and other special events going on. We had the sale on that night last year too, and since we had perfect weather last year, we had tons of foot traffic. 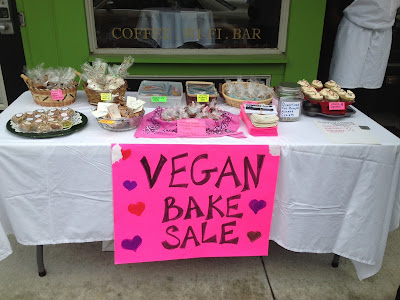 But this year, Mother Nature decided to bring a few thundershowers through, so we had less traffic. And every time the sprinkles started, we had to pull our tables under the restaurant's awning. But despite the crappy weather and having less business than last year, we still raised $600 for the Humane Society, only $100 less than last year! Go us! 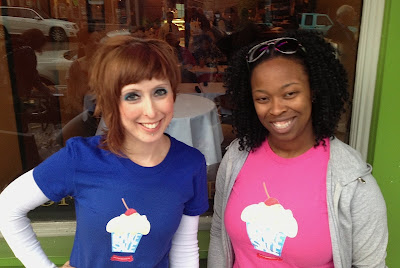 We had so many contributions from Memphis' most talented vegan bakers. I mean, bakers came out of the woodwork for this!! We filled up two long tables with sweets, and bakers kept dropping things off throughout the night. So I'll just apologize now for this incredibly epic photo-heavy post. I made Vanilla Cupcakes from Vegan Cupcakes Take Over the World because they were easy and cute: 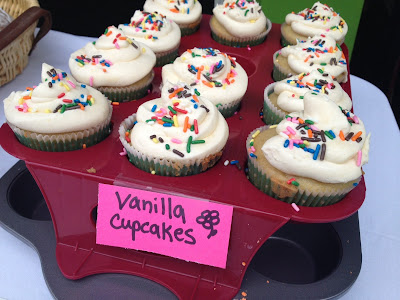 And I made White Chocolate Macadamia Nut Blondies from Vegan Cookies Invade Your Cookie Jar. Here there are before packaging: 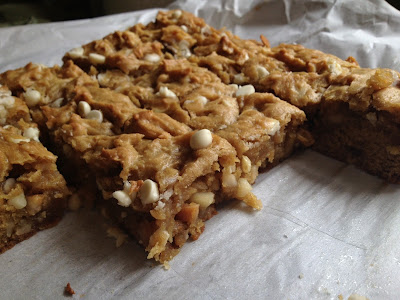 And there they are all wrapped up and ready to sell: 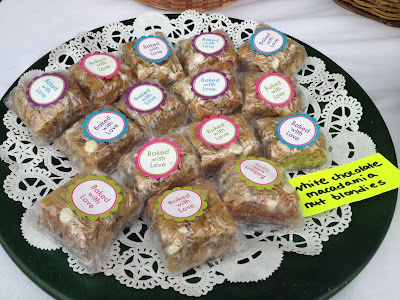 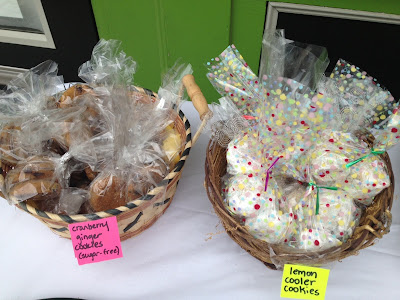 Stephanie (Poopie Bitch on the PPK) of Swell Baked Goods brought all kinds of awesomeness. 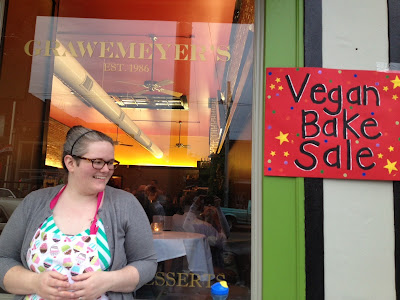 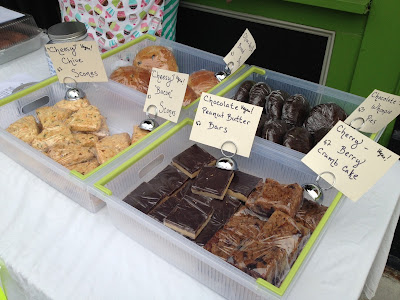 Cassi, a friend of mine who just went vegan a month or so ago, made these Almond Butter Chickpea Chocolate Chip Cookies. They were low-cal and gluten-free! 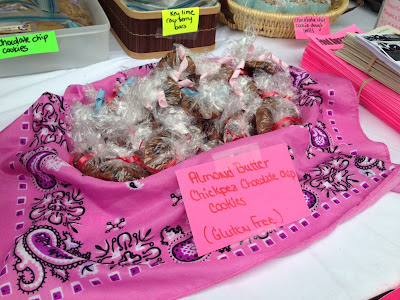 Leslie, my friend who is obsessed with all things Indian, made some Indian treats. There were Masala Tea Cakes and Rava Ladus (creamed rice and cashew balls): 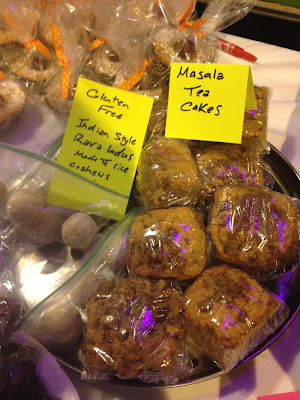 And she made Coconut Burfi! If you've never had burfi, you're missing out. It's like Indian milk fudge minus the chocolate. So good! It was almost gone when I snapped this pic! 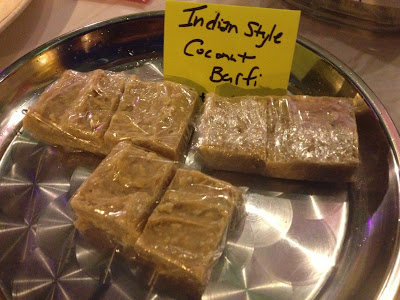 Shay took some time out from being a new mom to make some super-duper Fudgey Brownies! 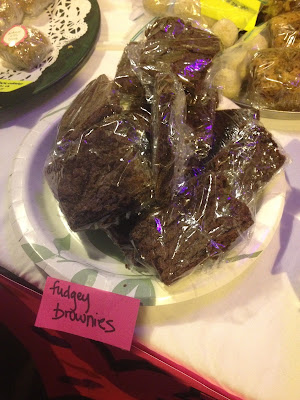 Treats with a Twist blogger Melissa Kerras made these Peanut Butter Chocolate Chip Cookie Dough Balls (I forgot to write "peanut butter" on the label, but I'm sure people could figure it out ... they smelled heavenly), which were gone before I had a chance to buy some: 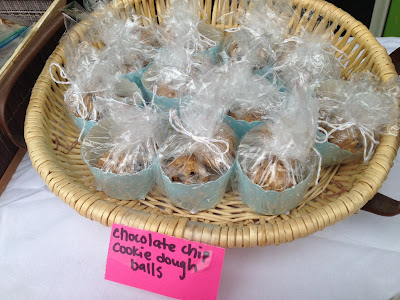 She also made these amazing Chocolate Chunk Cookies. And yes, I did get to sample those. Yum! 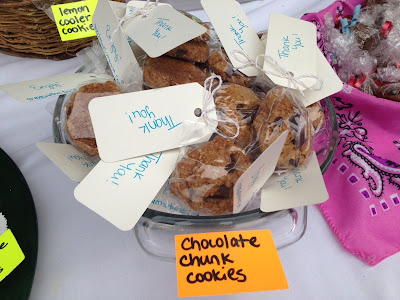 Dawn Vinson of the Downtown Memphis Commission made Chocolate Chip Cookies and Key Lime Raspberry Bars. I didn't get to try either, but I heard people raving about those lime bars all night! 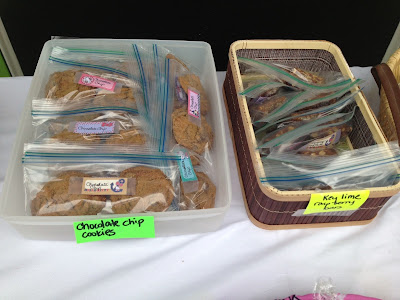 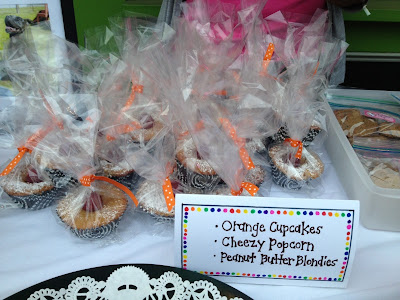 Peanut Butter Blondies (I just had one today ... OMG!). People were raving about these all night: 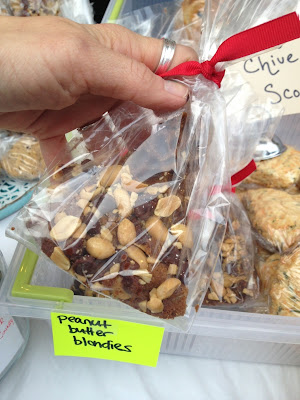 And Cheezy Popcorn (made with nooch): 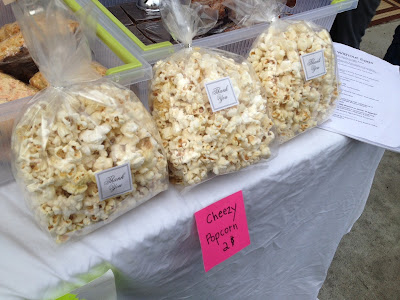 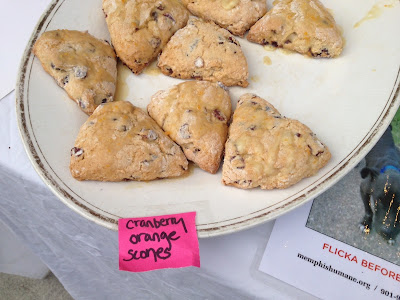 And she made some crazy awesome gluten-free Chocolate Chip Cookies using the Babycakes recipe. Behind her cookies are some delicious Cowboy Cookies (chocolate chip, coconut, oats, and pecans) made by a generous mystery baker. Her husband dropped them off at the start of the bake sale and just said his wife baked these to contribute. How awesome! 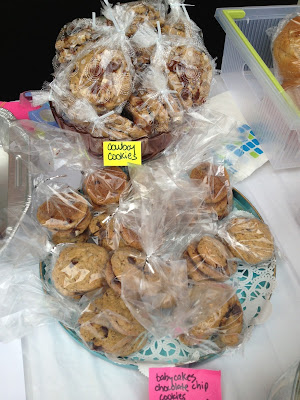 Vivian made some Chocolate Coma Cupcakes (these had chocolate chips inside!). So good! I had a leftover one yesterday. Yum, yum, yum! 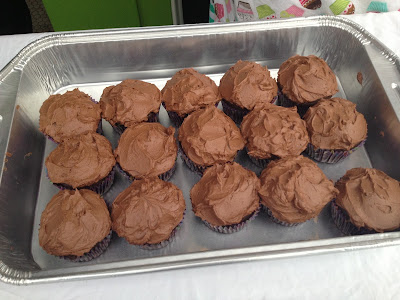 I forgot to photograph a few more goods that arrived after the sale started. I'm missing a picture of Deirdre and Hannah's scrumptious Cake Balls. And I'm lacking a picture of Katie's Chocolate Peanut Butter Oatmeal Candy. But I can attest that both were very yummy! I tried to buy many of the treats at the sale for myself before they were all gone.

I do, however, have a picture of our bake sale mascot — Flicka! Katie, who does some PR work for the Humane Society, brought an adoptable pit mix named Flicka to meet and greet the customers. She only jumped on the table and tried to steal a cupcake once. Flicka was so well-behaved and such a charmer. She came from a bad situation, and when she was rescued, she was all skin and bones. But look at her now! She's up for adoption at the Memphis Humane Society if you're interested! 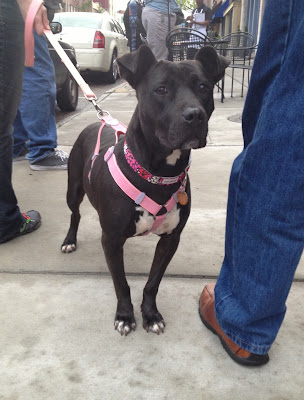 Thanks to all the amazing vegan bakers! And thanks to all of our customers for helping us raise money for pups like Flicka!
Posted by Bianca at 9:15 PM

I got stitches in my thumb this weekend, so I couldn't make as many baked goods as I had hoped, but I was still able to raise $330 for Poplar Spring Animal Sanctuary at my bake sale this morning!
So excited to see everyone's tables!

Everything looks so delicious! I wish I could have been there. And congratulations on still being able to raise a good amount of money for the Humane Society, despite the weather!

For this kind of delicious food i will eat it anywhere and anytime. For catering and event planning visit us.

That is so awesome! I am out of the country but I wonder if my town ever has those and how we can make one!

What were the prices on the cookies/cupcakes? I saw $2 for the popcorn, but there was no other price for the other goods. Thanks :)

Oh my goodness, what an amazing bake sale! There are so many amazing looking things on that table, I would have definitely picked up a whole lot of stuff!

Nice work raising all of that money for the animals, you guys rock.

Hey Sophie, we put out a suggested donation sign that asked for $2 for just about everything. But I think Steph's Whoopie Pies and the bread bowls were $3 because they were huge.

Nice job! Bummer about the weather, though.
I'm really digging all those Indian desserts! I'd love to try burfi or those tea cakes, yum. But also the macadamia blondies! Dang!

Oh man, those look AMAZING! Memphis really seems to have a happening vegan community. Seems like Little Rock needs to catch up!

Oh man, everything looks so good. I would have been all over those chocolate chip cupcakes!

What a fabulous bake sale! Mine pales in comparison, haha, but at least we all raised money for a good cause!