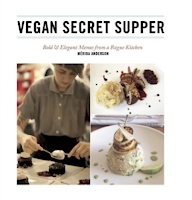 I've always wished someone around here would start a vegan secret supper club. It couldn't be me, as I have far too many critters in my house to actually cook for any strangers who may show up ("Hey, why is there cat hair in this soup?" I can just hear it now). But you know, I wish someone else would host one and I could just show up and eat.

There is (or at least there was ... not sure if it's still going on) a non-vegan supper club in Memphis, and they did have one vegan dinner night with a menu prepared by my friend/co-worker/fellow blogger/cookbook author Justin Fox Burks of The Chubby Vegetarian. That was awesome. But I want that every month!

Until then, at least I can dream with my copy of the new Vegan Secret Suppers: Bold & Elegant Menus from a Rogue Kitchen by Merida Anderson. Merida has been hosting vegan secret suppers since 2008 in East Vancouver, Montreal, and Brooklyn, and these are her collected recipes from her time in the rogue kitchen (a.k.a. her walk-in closet-sized kitchen in her tiny East Vancouver attic apartment).

She doesn't have any fancy culinary training. I like that. I get a little annoyed when people are all, "I trained at Le Cordon Bleu" or whatever. Cooking is an art, and you don't need schoolin' to tap into that creative power. I'm sure you learn fancy tricks in cooking school, and I bet it's a load of fun. But it's not necessary to create delicious, gourmet meals. Merida proves that.

Now y'all know "gourmet" isn't really my bag. I'm a home-cookin' kind of girl with a penchant for deep-fried tofu, cornbread in cast iron, and simple slow-cooked collards. But sometimes, a girl needs to impress. And this is the book to pull of the shelf when you've got to put on your good dress and clean up a little. Dishes like Blue Corn Empanadas with Pecans, Black Beans, Mole Pipan, Red Cabbage, & Avocado or Yam & Walnut Croquettes with Coconut Sour Cream, Ancho Balsamic Beet Reduction & Wilted Pea Shoots are sure to impress.

Guests are always more impressed when a recipe has a long name with all the ingredients in the title, right? That's always how you can tell a gourmet recipe from an everyday one. Many of the recipes have multiple steps, as you might expect. And since I wasn't cooking for anyone but little old me tonight, I went with one with a shorter name that sounded easier — Caramelized Onion Bisque with Roasted Garlic Toast:

Despite the shorter name, this recipe still took lots of love and care. The onions are caramelized in vinegar, white wine, Dijon mustard, red pepper flakes, and thyme for a good 20 minutes before adding the roasted garlic (which you roast yourself beforehand) and stock. But it was well worth the effort. The onions are so sweet and delicious, and the stock is delightfully spicy (I added extra red pepper flakes).

The toast was what really drew me to this recipe though. That yellow stuff on top is Merida's Coconut Melting Cheese. It's a homemade cheese paste that is like no other vegan cheese I've ever made (and I've made LOTS of homemade cheese). Coconut oil and almond milks are blended with tomato paste, nutritional yeast, roasted garlic, and some other spices. It's liquidy right out of the blender, but when you refrigerate it overnight, it gets thick and spreadable (probably due to the cornstarch thickening and the coconut oil solidifying). It's spread over crostini and baked until bubbly. Perfect complement to the soup.

I can't wait to explore the dessert chapter. There's a Peanut Butter, White Chocolate, & Brownie Cheesecake! And Dark Chocolate Cake with Chocolate Ganache Glaze & Avocado Mint Ice Cream! Oh, and that reminds me, there's an entire chapter on homemade ice cream! And there's a chapter on tea and soda with a recipe for homemade Ginger Beer Syrup and Lavender Lime Soda Concentrate!

Now if only someone around here would take this book and start a vegan supper club. Anyone?
Posted by Bianca at 11:18 PM

Thanks for your sharing regarding to vegan foods. :)

May I add your blog to my favourite blog list?

That was a really fun dinner: fancy comfort food that was vegan. It was quite the culinary challenge! http://chubbyvegetarian.blogspot.com/2011/10/eatable-supper-club-all-vegan-dinner-at.html

I wish there were a secret vegan (or vegetarian) supper club around here too; and maybe there is but I haven't come across them yet.

cool! I have a review of this book coming up next week. I really like it! The recipes do take a little time, but they seem to reward your effort, which makes it okay with me. I have my eye on this recipe, so I'm glad to read you liked it! (especially those alluring toasts!)

A vegan secret supper club sounds like so much fun!!! I would love to host one someday. I feel like I'm not fancy enough though, ha! Sounds like a fun book and the meal looks great! That toast, yum!

I can't wait to get my paws on this book. Everything she makes always looks stunning.