First of all, Happy Vegan Mofo!! For anyone who isn't the know, Vegan Mofo stands for "Vegan Month of Food." Every October, vegan bloggers invade the internets as they attempt to post for a record number of days throughout the month. Since I blog every week day anyway, it's no biggie for me. But some bloggers ONLY blog during Mofo! Go here to see the RSS feed and a list of 2011 Mofo bloggers. And now onto tonight's post ...

For over a year, a small group of Memphis foodies have been meeting regularly for an underground supper club event called eaTABLE. The dinners are prepared by both amateur and professional chefs, and the meetings are held in different locations each time. You have to be invited since there are only a select number of seats.

In the past, the dinners have always been either meaty or lacto-ovo vegetarian, but not vegan. But this month's installment — prepared by my friend/co-worker Justin Fox Burks of the Chubby Vegetarian blog and his wife Amy Lawrence – was totally VEGAN! And since I know a few of the folks who put it on, they were kind enough to think of me when compiling the guest list. 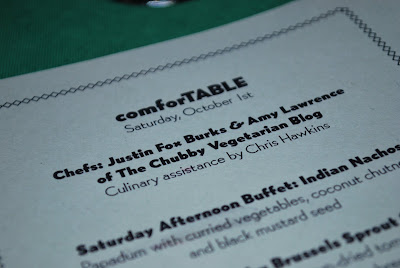 The dinner was held on Saturday night at the Live From Memphis headquarters downtown. The theme was "comfoTABLE" and all six courses had cute names, like "Saturday Afternoon Buffet" for the appetizers or "Drive Thru Please" for the sliders course.

The appetizers were Justin's killer Indian Nachos (papadum crackers topped with curried veggies, coconut chutney, and black mustard seed). So delicious! I ate, like, five while I walked around, sipping wine and chatting with folks before the formal dinner began. 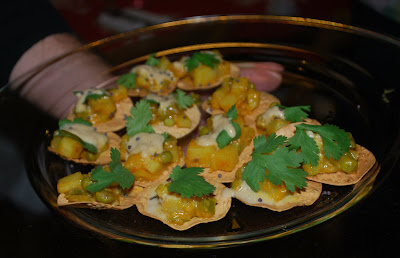 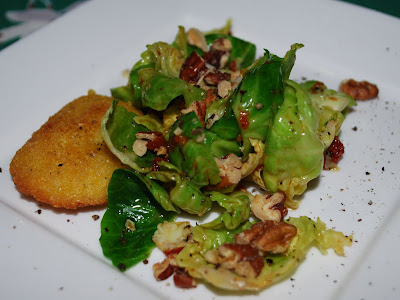 The first main course entree was Forbidden Black Rice topped with seared "scallops", pickled sea beans, and a kaffir lime leaf. Can anyone guess what the "scallop" was made from? 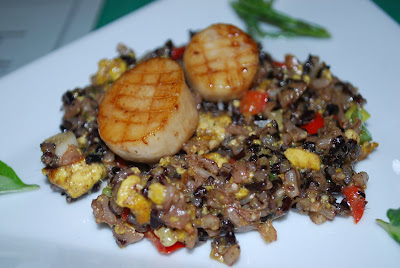 If you said, "king oyster mushrooms," you'd be right! I've never had a real scallop, but I've seen them, and these look exactly the same to me. The omnis at the table (that was everyone except for me and one other person) said the texture was similar to a scallop as well.

Then we were served Panelle Sliders (grilled chickpea fritters on a sesame roll with caponata and pine nuts): 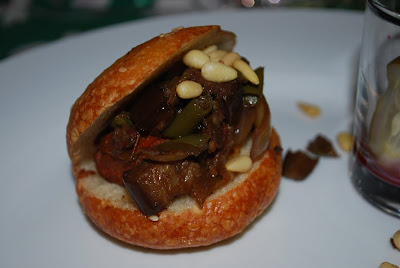 Since I'm not usually a gourmet diner, I had no idea what caponata was. Turns out, it's like eggplant caviar. Yum! You can't see the chickpea fritter in here, but it was delicious. This course was served with an assortment of homemade pickles (okra, beet, and cucumber): 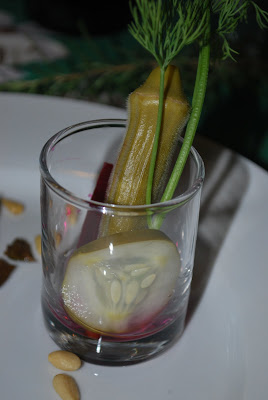 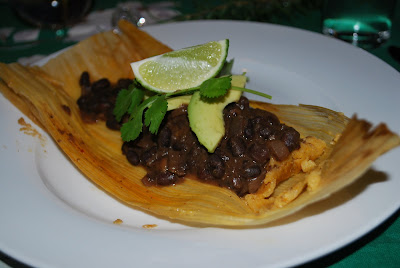 OMG, y'all! I don't think I'd ever tried chanterelles, but that's one of the wild mushrooms Justin used in this tamale. And they added such a meaty, hearty flavor.

Dessert was two kinds of Rice Crispy Treats made by Amy! The one in the foreground was a spicy pumpkin seed and cayenne treat and the other was made with salted chocolate by regional chocolatier Olive & Sinclair. Amy used Dandies marshmallows for these: 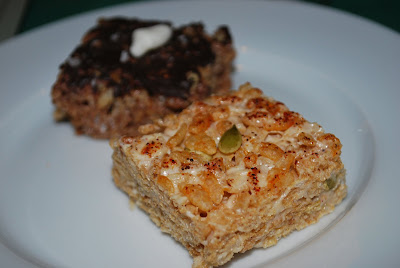 Overall, the dinner was a great success! And I washed it all down with Orleans Hill vegan, organic Cabernet Savignon. The meat-eating guests seemed very pleased with the totally meatless meal, and I can't tell you how many times I heard, "I can't believe this is vegan!" It's funny how vegan food gets a reputation for being bland or inferior to meat-based dishes. But events like this one (and Justin and Amy's cooking!) prove that old myth wrong.
Posted by Bianca at 11:41 PM

so. much. fooOOOOOod.
whoa, i'm impressed with you, ms. crunk.

Wow, that's such an incredible meal! I want it all now!

Salted olive and chocolate rice crispy treat??? Wow. Did most people eat it?
Caponata is awesome, but the whole menu sounds great.

Wow!!! All of the courses look and sound so amazing! How awesome for them to have an all-vegan super secret dinner night! Several ingredients I've never tried before either, but I have lots of good ideas how to try them now!

I saw this guy on Food Network. What a stunning meal. Wow.

I'm guessing the scallops are hearts of palm?

Hey Food Feud! The chocolate in the crispy treat a regional brand called Olive & Sinclair. It wasn't olives and chocolate together! Sorry for the confusion!

What an incredible feast! So gourmet and impressive. The scallops really drew me in.

Holy Yum!! I'm doing 30 Days of Nachos for MoFo so I was particularly interested in the Indian Nachos!! Mmmmm :)

That is some seriously gourmet veganity! Looks incredible - glad you had the chance to catch an all-vegan dinner! :)

WOAH!! That all looks AMAZING!! Way to get in on secret vegan feasting.
Happy MoFo'ing Buddy.
xx

wow, the scallops look just like real scallops. I love them and during my 10% non vegan diet time (when eating out at special organic restaurants for example) I go for scallops. I wonder if the vegan version tastes similar. will have to find them somewhere! Incredible vegan meal!

this looks amazing! i love it that it was mostly for omnis, and that it was impressive. also, i totes agree that sundried toms fulfill a similar niche as bacon.

That all looks absolutely beautiful and so like real scallops!

We loved having you there!

I think I would die if there was a vegan supper club around here.