I've blogged several times about how my omni boyfriend and I only have one meal we ever eat together (unless we're dining out). Mostly, we don't eat together because we work different schedules, but we also don't really like the same foods. He likes meat. I like fake meat. And truthfully, I don't like to share.

But every now and again, when the stars align, we cook spaghetti together. We have a secret sauce recipe that's been perfected over the years. It's a pinch of this, a pinch of that. We never measure, so the recipe I'm sharing with you is based on my best guess. The sauce is adapted from a cookbook I bought back in college (that was almost 10 years ago!!! Jesus Christ) called Vegetarian Comfort Food.

Last night, we made Paul and Bianca's Special Spaghetti with Sauteed Mushrooms and Cheatballs: 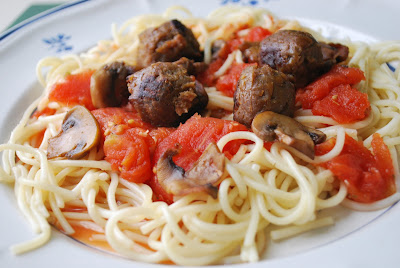 Paul didn't eat the cheatballs (Yves Veggie Meatballs), but I did, and they were DEELICIOUS! But I don't usually add fake meat. I just happened to have some in the fridge that needed usin'. The mushrooms, however, are a must. And they have to prepared separately from the sauce if you ask us.

Here's the recipe for the sauce and mushrooms separately. It's enough to top a pound of pasta.

Heat the oil in a large saucepan. Add the garlic (and habanero, if using) and cook and stir for 1 minute. Use your hands to break up the tomatoes from the can, and add them to the saucepan.

If the sauce seems too dry, add a little liquid from a can of the tomatoes. You won't need all of the tomato liquid though. Just a splash from one can is plenty. Stir in the dried herbs and maple syrup and simmer for 15 minutes.

Melt the Earth Balance in a large skillet and add the mushrooms. Saute until the mushrooms begin to release their juices (haha, that sounds dirty!). Season to taste and continue to cook until mushrooms are tender and slightly browned.

Top pasta with tomato sauce and then mushroom. Eat. Enjoy.

Hot damn, the sauce and mushrooms sound so awesome. Extra points for all that garlic, habanero, soy sauce, and sriracha!

I made spaghetti last night, and I'm always amazed at how difficult it is to the get the sauce just right. Definitely agree with all the garlic!

Oh, yay, thanks for sharing this! You know, I just don't eat spaghetti enough. Why is that? I must!

That looks great!!!! My hubby was a carnivore, and without me saying anything......he is now a raging green vegan!!!! It happens!!!! P**y moves mountains!

Paul's Magic Mushrooms....LOL! And if any food could bring people together, spaghetti is it. It's one of the only (sometimes) vegan comfort foods that a lot of us grow up eating I think.

Adding a bit of sweetener to tomato sauces is always a good idea. I usually do brown sugar, but I bet maple tastes even better!

My husband and I ate separately until we lived together - then he ate whatever I made, and now he likes fake meat! This sauce looks delish - I love the idea of adding maple syrup and habaneros - sweet and spicy always sound delish!

YUM YUM YUM.. habanero is spaghetti sauce. I think I love you.

Good call on the habenero.