Several months ago, my awesome crunk cookbook testers tried out my recipe for Sweet Tater Bread. I jotted down their feedback, made some improvements, and finally got around to baking another loaf for breakfast this week. Look at the sexy pecans in that slice! 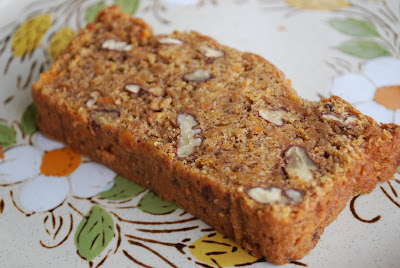 It was so tasty that I decided I really needed to share this recipe. Even though I don't divulge most of my cookbook recipes, I like to put a few out there as a sort of sneak peek. Not to brag, but this bread is really tasty. I'm proud of it, and I want to share. So I'm giving out the recipe at the end of this post. Here's a whole loaf shot: 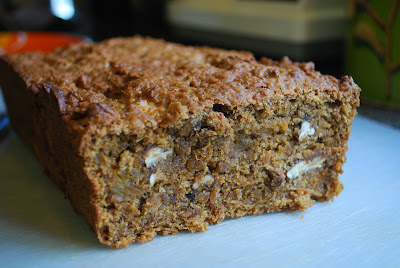 Each morning, I've been eating a slice or two schmeared with the Rich Tofu Cream Cheeze from The Uncheese Cookbook: 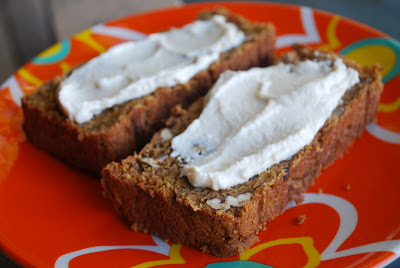 Although Joanne Stepaniak's tofu cream cheese recipe is no Tofutti, it's a heck of a lot cheaper. The bread doesn't really need any extra spreads, but I always schmear some kind of vegan cream cheeze or jam on my sweet breads.

Peel and cube sweet potatoes. Bring a pot of water to a boil and add potatoes. Cook about 20 minutes or until very soft. Drain water and mash with a fork or potato masher. Measure out 1 1/2 cups and discard any leftovers (or save for use in another dish). Set aside.

While potatoes are boiling, toast pecans in a dry pan in the oven for eight minutes. Set aside.

Add potato mixture to dry ingredients and stir until well combined. Fold in pecans. Pour into a greased loaf pan and bake 60 to 70 minutes or until a toothpick inserted in the center of the loaf comes out clean.

Thanks for sharing. mmm . I love sweet potato anything! And those pecans . look . so . good!

That sounds so good! I love anything made with sweet potatoes. Thanks so much for sharing the recipe, I can't wait to try it!

I agree with Jenna - I, too, love Sweet Potato anything! Yesterday for lunch I had a Delicata squash aka Sweet Potato squash - it was yummy! And, as soon as I get a ricer, I'm going to experiment with sweet potato gnocchi...I've been jonesin' for that!
Thanks for the recipe...the bread looks delicious!

OMG sweet potato bread with cream cheese... NOM! I just need to find me some sweet potatoes here in Berlin... this looks amazing!

YAY! I second the sharing of this recipe. It's an awesome way to get people to buy the book when it comes out if they have something to try that tastes really awesome.

I liked that recipe alot. A LOT!

This is still one of my favorite things I have made from the cookbook. Although I haven't made anything I didn't like. I received so many compliments from everyone who tried some and my husband can devour a whole loaf. You have inspired me to make more this weekend. Thanks!

Even though I tested this, I mighttt need to make it again. :)

i love your tester recipes - so good! i'm making some of the wangs this weekend - will report back with results!

You said it best... It really does look sexy!!!! I may try it and sub applesauce for the nanner. I usually have baking failures because I live at high altitude but I've been researching adjustments. This may be the PERFECT excuse to to my research to use!!! :D
-A

OMG I am going to make that bread this Sunday! I loooooove sweet potatoes and it looks delish with the cheese (I might use real cheese, though...)
And btw, have you been in Buster's?! I'm sure you have, but it is kind of a trek for a midtowner or a downtowner.
I work out east now and I stopped in there to get the Rhone the other night. It is OVERWHELMING how many wines they have! And they have sooo many in the 8-10 dollar range. I highly recommend going there if you want to get a good bang for your buck.
Hope you have a great wknd! I'll let you and blogland know how the bread turns out!!

Awesome. I am going to make this over the weekend. No nuts though, so baby Adam can have some. Thanks for sharing.

those are some sexy pecans, indeed! yay! dan & i are gonna have to make your sweet tater bread, Bianca. i can't believe we didn't test it a while ago. i'm so sorry! we'll make it gluten-free & let you know what g-f flours we use and how it turns out. i can't wait! our csa just started offering sweet potatoes as they're harvesting them now & i'm gonna pick 2 up this weekend! yay!

yumm i love sweet potato anything, that sounds so delicious! ill need to try it out :)

I'm a new reader (month or so), and really enjoying your blog a lot so far. thanks for sharing this one, I'll be trying it for sure. Can't wait for your cookbook to come out!!

I just made it and am eatin' it right now...yum! I made some adjustments though. I used untoasted raw walnuts & two bananas. I also skipped the ginger since I'm not a huge fan. My omni husband likes it! Hell yes! I will definitely make this again.