Remember the speculoos spread craze from the PPK? A while back, everyone was raving about this spread made from European speculoos cookies. Lotus makes it, and they sell it in jars like peanut butter. But it's not available in Memphis, as far as I can tell. Thankfully, Mihl of Seitan Is My Motor developed her own recipe for making a similar spread at home using Speculoos or Biscoff cookies (or biscuits, as they say in Europe). 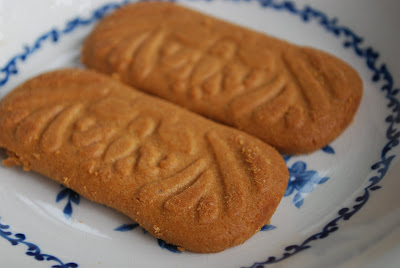 Up until a few weeks ago, I didn't think I could find those cookies around here either. But Poopie Bitch sent me an urgent text message alerting me that she'd found Biscoff (the American name for Speculoos biscuits) at both Kroger and Walgreens! I rushed to the nearest Walgreens and bought a pack for $2.50!

Then I came home and whipped up Mihl's Speculoos Spread. I've been enjoying it on whole wheat toast for breakfast everyday this week: 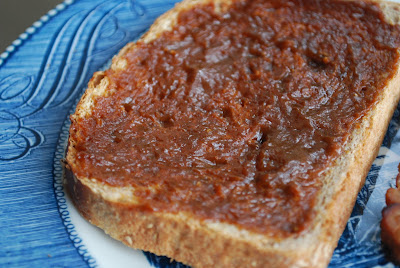 Imagine spreading buttery cookies all over toast. Sounds like heaven, right? This stuff is so amazing. I made a few changes to Mihl's recipe. She calls for one-fourth cup of coconut oil, but I only used 2 tablespoons (along with 4 tablespoons of water). Even though coconut oil is good fat, I couldn't bring myself to use that much since the cookies contain some fat too.

I enjoyed the toast with a couple slices of smoky Tempeh Bacon, a recipe from my cookbook: 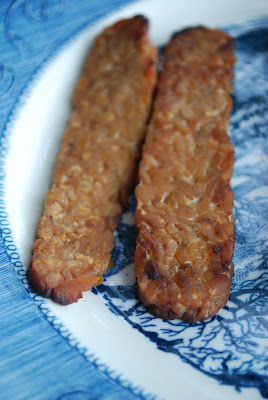 Until yesterday, I was certain that speculoos spread was the highlight of my week. But a miraculous thing happened yesterday. The Dalai-freakin'-Lama touched my lip ring! Seriously. 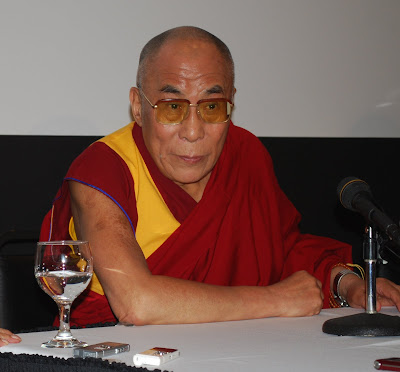 He was in town to accept the International Freedom Award from the National Civil Rights Museum in Memphis. Since I work for the alt-weekly (the Memphis Flyer), I was allowed to sit in on a media Q&A with the Dalai Lama before the ceremony. As he was leaving the session, he stopped to shake hands with a few media folks who were reaching out to touch him.

I was sitting at the end of a row. As he started to walk past me, he suddenly stopped and looked at my lip stud. Then he lightly grabbed it, wiggled it, and laughed to himself. Then he walked on. It was so unexpected and really amazing. I feel blessed! Here's a picture of me and the Dalai Lama after he pulled his hand away. You can see how totally giddy I am: 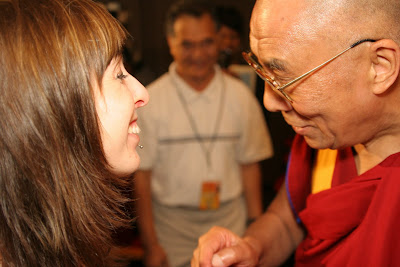 Photo courtesy of Mark Ramirez
Posted by Bianca at 8:05 PM

Oh my gosh, wow! I would never wash/take out/let anyone else touch that ring ever!

This might be the coolest blog post ever. What an amazing moment! And the picture is priceless. :)

oooooooh, that's such a super, super cute picture of you and the Dalai Lama together - joy and laughter. I love it, Bianca. lovely.

The DALAI LAMA?!? How wonderful! That is such an adorable, joyful photo of the two of you!!!!

inspiring - breath-taking, how lovely to be in his presence..., an incredible memory, to be sure.
Namaste, friend.

PLEASE tell me you're going to frame that photo! So awesome.

Also, it was Kroger, not Wal-Mart. Not that I don't occasionally find myself in a Wal-Mart... but really!

omg! cookies on toast! and zomg!! the dalai lama touched your lip ring!! What a freaking story.

i'm jealous you got to see him..let alone MEET him! too cool. also too cool- the fact that you have a lip ring. that picture of the two of you is so beautiful! you better frame that!

SUCH a great photo!!! There's one for the grandkids ;)

That's awesome, what a cool pic of you & the Dalai Lama!

I love Mihl for coming up with the speculoos spread recipe, genius!

What an incredible experience. :)

Great post Bianca. My husband who is European told mea few weeks ago about those cookies that he knows for sure are vegan but I did not make the link between that and Mihl's post.I saw some last week for 1 20 euro so I will pick a pack up and work on the spread with less fat of course. That pic of you with the Dalai Lama is priceless.

HahaHAhaHA! That is fantastic.

The Dalai Lama touched your lip ring!!?? That is so awesome!

Also, love the blog header and your blog. Thanks for stopping by Veg Out With Us!

That is so awesome. You are officially the coolest person ever.

omg you lucky bish!
Henceforth your life is gonna be purely blessed by that man! JUST DON'T TAKE OUT THE LABRET! lol!

Wow, the Dalai Lama and Speculoos in one post :)

I am glad you liked the spread. First I wondered why it looked so different from mine, but then I got it. It must be because of the water you used. I know there is much fat in that recipe and I usually don't use that much, but it is important for both the texture and creamyness (to make it like the original). I am glad your lower fat version worked out as well and thank you for trying the recipe.

that is so awesome on the Dalai Lama! wow! i love the picture - it made me smile so much!

have a glorious weekend!

what a lucky girl!

AMAZING!!!!! That is a GREAT picture!!!!! You have got to do SOMETHING special with that picture!!!
-A

That's seriously a GREAT picture. they captured the moment amazingly.

and i can't believe there's a spread made of cookies. i usually cut back on oils too in recipes, but i've read so much about how coconut oil increases your metabolism (i think by like 50%!) that i never decrease it in recipes because i feel like that more than makes up for it, and it's so freaking good. haha

OMG that is so cool! Love that picture!

That's such a great story! I love that he wiggled your lip ring.

That is SUCH a cool story about the Dalai Lama!

That spread looks SOOOOO good. I must make it sometime!

That is an incredible photo... what an opportunity!! :D

!!! I don't often see the Dalai Lama on blogs I follow, so I'm kind of speechless. That photo is a treasure - what an experience! Also, you get major vegan points for doing a post with the Dalai Lama as the second act to vegan cookies :)

uh helooo totally put that picture in your cookbook!

Agree with everyone...what a delightful experience!!

that's adorable, words are failing me, what an awesome man. And an awesomeness that you have a picture of the very moment. Do you feel anew? :D
I'm all smiley from this post!!

That is a fantastic story! You'll be the hit of many vegan cocktail parties I'm sure! LOVE the photo! It just says peace,joy and happiness!

Whoa! that is a pretty amazing post, B! Congrats on the encounter.

I don't even know what to say to that! I mean, the Dalai Lama!!! That is just amazing. You are blessed!

That's one of the coolest stories ever!!

WOW! That is crazy! I love how happy and silly he always seems. That is a sign that he is doing something right for sure!

I've got a jar of the speculoos spread in the cupboard but i was excited to see Mihl's recipe when she posted it because it cost so freakin much to import the jar and the cookies are quite readily available here!!

That's awesome that the Dalai Lama touched your lip ring, I wouldn't know quite how to react to that I don't think!

This is so amazing! I truly got teary reading about your experience and then to see the picture at the end - just wow.

The picture of you and the Dalai Lama is amazing! The expression on both of your faces is fantastic.