As if to taunt me at the start of my local eating project, my shipment of Teese arrived just as I was beginning my week-long challenge. Though I was super-elated to see those long, round tubes of supposedly melty vegan mozzerella, I knew it was hands off until my locavore week was complete.

But now that I'm back on regular eats (food miles and all), I've ripped open the Teese and put it to the test. I'm probably the last vegan blogger to try this new "cheese" product, so bare with me. Inspired by Melisser's (of The Urban Housewife) Teese tests, I started with a Grilled Teese Sandwich: 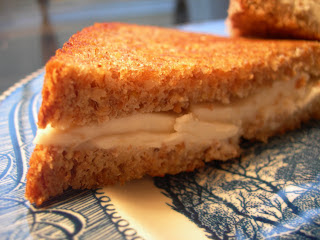 Now, I recall her Teese being a little meltier than this, but she made hers in a sandwich press. I used a plain old skillet. As you can see, the sliced Teese has retained its original shape, though it did begin to soften as though it was starting to melt. While frying the grilled cheese, I topped the skillet with a lid to trap in moisture.

I seem to remember someone on some blog (maybe Jess of Get Sconed) saying that Teese melts best when shredded or cut into tiny bits. And that's probably where I messed up here, since I sliced mine pretty thick.

But regardless of its melty factor, Teese is delicious! Way better than Vegan Rella, and similar in taste to Follow Your Heart mozzerella. But it's flavor is a tad bit more buttery, and that was an excellent complement to the melted Earth Balance on my grilled Teese sandwich. Next I will try the famed Teese Pizza.

By the way, I need to thank my Daddy for ordering the Teese. He placed an order with Cosmo's Vegan Shoppe several weeks ago. Here's the whole stash: 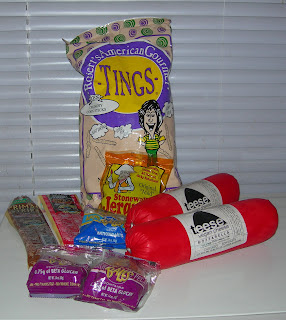 My dad actually picked all this stuff out by himself. I have the best dad in the world! He's not even close to being vegan, but he knows what I like — Tings, two tubes of Teese, two Cashew Pecan Nut Butter Balls, one Almond Nut Butter Ball, Stonewall's Mild Veggie Jerquee, Primal Strips Shitake Mushroom Hot & Spicy Jerky, Primal Strips Soy Hickory Smoked Jerky, Larabar Jocalat Chocolate Coffee Bar, and two bumper stickers for my new car (pictured below).

In tribute to the SHAC7: 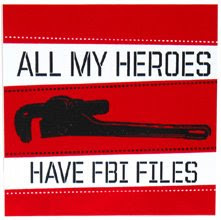 I'm all out of Teese! and it's too hot to order more. heartbroken, much?
love your loot!

Oh my gosh that sandwich looks SO yummy!!!

I've never tried tesse either!!! but it looks pretty melty to me!!!

Glad that the Teese experiment worked!

I wish I had some teese to try *sigh*

My Teese tips would be to shred it or broil it if possible. Although I found there's a fine line with broiling. One minute it was still solid and the next minute it was bubbling and melting everywhere. I'm not above picking Teese of a baking pan and eating it though. I wish my dad ordered me Teese and Tings!

Freakin' awesome. I can't wait to see the Teese pizza! I'm going to have to just give in and order some. I am also jealous of your Tings. WHY doesn't Wild Oats carry them?!

We should definitely go get falafel together - I will be there on Thursday night, and I think I'm going to actually get my friend Ahnah to come with me this time! We could go before the meeting, or Sunday sounds pretty good to me! The owner seriously knows me now, and starts my falafel as soon as I walk in the door! Haha, sad.

I haven't tried Teese yet, but all of the awesome reviews of it are definitely making me want some . . .

I still haven't tried Teese either. I thought it would look meltier too. Your dad sounds awesome! Tings are the best! They're like healthier, vegan Cheetos.

Thanks for the review since I have yet to try Teese also! Your Dad is very cool. Love the bumper stickers.

I haven't tried Teese yet, looks good! And your dad is awesome. Your neighbor cooks for you, your dad sends food - you lead a charmed existence. :)

The Teese looks really good, I hope I'll be able to try it one of these days.